Back to School with a Joyful Noise

Images abound of children in the back-to-school season: lively little ones streaming out of the standard-make yellow school buses and into the red-brick schools and blacktop schoolyards; the flurry of colors as they run, skip, and jump down halls, into classrooms, and across the playing fields; the rousing sounds of their joyous cries and calls. Children’s songs and singing games, and rhymes and rhythmic chants, fill the autumn air, as the children embody music in their playful capers between and around classroom studies. Their musical moments flow through the home, too, at meals, at bath-times and bedtimes, in the yard, and in the family car. All within earshot are energized by children’s inventive lyrical selves, their dynamic rhythms, their plain and elaborated melodies, and their exuberance. They sing because they must. 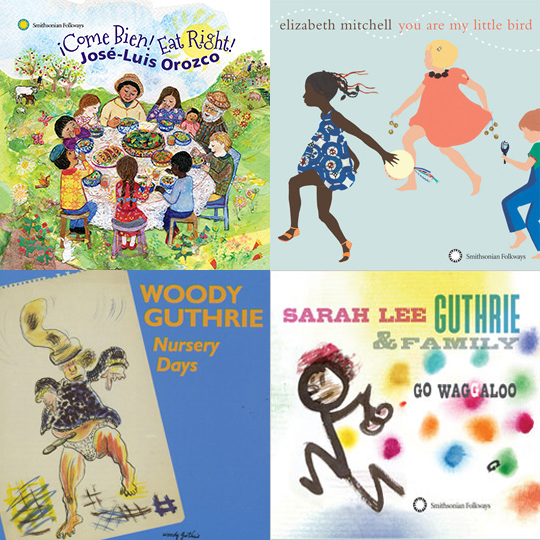 There are treasured professional musicians who have long committed their musical gifts to raising up children in and through music, and who contend that children learn their world through song. Adult child-song singers understand that music stimulates thought (and action), that songs teach language as well as concepts in math, science, and the social sciences. These pro-musicians produce song collections for listening to and singing with, and the songs they offer effectively impact children’s social-emotional and cognitive development. Sailing through their expressive songs for children are powerful messages for everyday safety and security, for health and well-being, and of reassurance to children that they “belong” to their family, their friends, and to the wonderful world in which they live.

In the back-to-school season and all through the year, children’s songs settle nicely into life in school and in the family. The songs are contagious, even irresistible, and when we least expect it, they compel us—children-present and children-past—to make a joyful noise together.

– Patricia Campbell,1 Professor of Music at the University of Washington

Back to School with a Joyful Noise
Click to play

New York City, Midtown Manhattan, 1952, was the scene of a wide variety of children’s music, in several languages. Tony Schwartz was following the musical expressions of his local community, and ensured with this collection that children were well represented as they played on sidewalks, streets, backyards, playgrounds, and recreation rooms in the neighborhood. Songs, singing games, and rhythm sections (featuring children’s playing on chairs, benches, wastebaskets, and hair combs) give a sense of the soundscape of children of various ethnicities, including African American, Puerto Rican, Irish, Italian, and Jewish cultures.

“Bill Bones” features a 12-year-old girl who lead-sings the story of a man and his shirt-eating goat, and is followed in imitation by a group of younger children. Sing this song in follow-the-leader fashion, joining the group in imitation of the voice of this well-tuned young soloist.

Track 2: “The Fox” by “Six boys in trouble” from Street and Gangland Rhythms

A group of African American boys at the cusp of adolescence were gathered together by E. Richard Sorensen in 1955, and their songs, rhythmic vocal chants, and percussion pieces are documented in this collection. Living in a New York City residential training school, these “six boys in trouble” had known various run-ins with the law in their young lives. Their repertoire shows the influences of criminal behaviors in their environment, mediated music on radio and records, and long-standing folk songs from different places and times.

“The Fox” is an exemplar of an historic folk song in the hands of inventive children who remake it into a highly rhythmic version that keeps it “real” and contemporary. Listen, find (or create) a rhythmic pattern to tap out on a table or chair, and join in singing little bits or all parts of this 15th-century Old-English song.

Children in Ecuador, Mexico, and Puerto Rico learn Spanish language and lore in school, but also through the songs and singing games that are passed on to them by older and more experienced friends, neighbors, and siblings, by parents, grandparents, and other family members. They preserve as they transmit to others, and also convert traditional songs through variation, addition, and deletion of words, and melodic and rhythmic features. Ethnomusicologist and collector Henrietta Yurchenko was keen to note, however, that certain Spanish traditions remained intact and well defined, and that children’s songs provided certain demonstration of the persistence of the Spanish legacy in Latin America.

“Arroz con Leche” is a standard children’s song in many Latin American cultures, and this rendition reaches beyond reference to rice and milk to a ring game that calls attention to marriageable senoritas who can “sew… embroider … go out and play.” Gather in a ring to sing, while moving around a center-circle child who selects a new child at the song’s end.

In English, Spanish, and French Creole, children in the Caribbean are prone to singing melodies with a rhythmic twist. They sing of family and friendships, of animals and means of transportation, and of who they are and who they hope become. They sing alone and together, and in ways that include leader-follower opportunities and call-and-response formats in circles and line-facing formations. Because Edna Smith Edet valued children’s expressive musical practices, she engineered the collection of songs and chants from Haiti, Jamaica, Puerto Rico, and Trinidad (and several “Caribbean American” songs as well).

“Jump Shamador” features Jamaican children in a “play-acting” call-and-response dialogue, in which one child after another sings out who they hope to become as adults (“doctor,” “teacher”), followed by a group whisper urging each child to “jump shamador.” The game is timeless, and will attract children to play-act, due to its mix of song, movement, and dramatic expression.

As a musician, composer, and educator, José-Luis Orozco specializes in reaching and teaching children through song. Because of his own bilingual skills and expertise as a bilingual educator, he moves children with ease between English and Spanish through songs that teach them basic literacy and numeracy as well as concepts of history and culture. His collection of “nutrition songs” is chock-full of lessons in daily health with lyrics and lively music that extol the virtues of a steady diet of fresh fruits, vegetables, and protein foods from an early age.

“Botana” is a Mexican-flavored musical tribute to the banana as one of many healthy snacks for children to enjoy, and the son jarocho strumming of leona, jarana, and requinto are a natural draw to singing “botana para todos/botana, tana, tana” and other short lyrical Spanish phrases. Sing with abandon yet still knowing how wonderfully well the song sends the message to “eat right.”

Track 6: “Ha-Ha This a Way” by Lead Belly from Where Did You Sleep Last Night?

Lead Belly’s reputation as a folk legend began on a Louisiana plantation, where he acquired a legacy of African American folk and blues tunes. Playing a twelve-string guitar, and occasionally a harmonica and an accordion, he sang songs of farming, plowing, and cattle herding, songs of cowboys, sailors, and prisoners, songs of his childhood. He intended that the songs he recorded and performed would entertain, invite participation of his listeners, and teach of the place and time of his childhood at the turn of the 20th century.

“Ha-Ha This a Way” is what Lead Belly called “a little children’s play song,” danced in a hand-holding ring (or circle) with one child at the center, jumping one way or another while other children imitated; the center child takes the hand of one child who is then invited in to become the new leader. It’s a clear illustration of children’s impulse to invent and imitate rhythmic movement.

Track 7: “Riding in My Car (Car Song)” by Woody Guthrie from Nursery Days

A giant among American singer-songwriters, Woody Guthrie performed and recorded songs for all ages, including children. He took great pleasure in singing songs with his own children in mind. His song verses celebrate childlike ways of playing with words, syllables, and everyday songs, rhyming them, repeating them, and ensuring that they are rhythmically alive. At the release of his recordings for children, he advised adults to pay attention to the natural musical ways of children: “Please, please, please, don’t read nor sing my songs like no lesson book…. Watch the kids. Do like they do.”

“Car Song” or “Riding in My Car” takes us to a time when cars were still a rarity. Captured in the song is the great American adventure, even by the mid-20th century, of climbing in, “spraddling” on the back seat, starting up the engine, and hearing its chugs and purrs as it transported families through town. Sing with a sense of humor and a regard for a time when cars were still new to the world.

Amid her many recordings of children’s music for well over 60 years, Ella Jenkins has won audiences everywhere, and her musical enthusiasm and teaching expertise have earned her countless awards as well as the honorable accolade, “America’s First Lady of Children’s Folk Song.” This popular recording was added to the National Recording Registry as a collection of culturally, historically, and aesthetically significant musical works, and the songs call out for participation by singers of every age.

“Did You Feed My Cow?” is classic among children’s songs, the sort of song that requests and even requires children to listen up and respond to questions of cows in the barnyard—first in thinking through the answers and then singing them in a timely and tuneful fashion. When you least expect it, you’ll find yourself responding to “the first lady’s” call.

Elizabeth Mitchell sings homemade songs of her own invention as well as sweet arrangements she has designed of long-standing folk and traditional songs. Her voice is gentle and welcoming of others to sing along. This award-winning album has given way to other collections of children’s songs, and she balances her indie music with her performing and recording of music for children, their parents, grandparents, teachers, and caregivers.

“Little Bird, Little Bird” brings an awareness of the birds in our neighborhoods who twitter their tuneful expressions—chickadees, jaybirds, whippoorwills. Sing the melody, “fine molasses candy,” as it closes the verses, and gently roll to the rhythm of the banjo’s picking pattern.

A singer-songwriter who appears as an acoustic musical duo with her husband, Johnny Irion, Sarah Lee Guthrie produced the children’s award-winning Go Waggaloo in 2009. Three of the songs feature her music set to lyrics left by her grandfather, Woody Guthrie, as well as her own playful songs for children and their families that feature also her husband, father Arlo Guthrie, Pete Seeger, and Tao Rodriguez-Seeger.

“Go Waggaloo” sports a lively rhythm and words that fall easily along, and the invitation is there for children (and all who listen) to sing the spirited phrase that loops along: “Hey, hey, go waggaloo.” It’s a light and carefree song, devoid of all serious matter, and welcoming of everyone with an urge to groove.

1 Patricia Shehan Campbell is Donald E. Peterson Professor of Music at the University of Washington, where she teaches courses at the interface of education and ethnomusicology. She lectures on the pedagogy of world music and children’s musical cultures, and enjoys all opportunities to sing children’s songs and play their singing games. She is the author of Lessons from the World (1991), Music in Cultural Context (1996), Songs in Their Heads (1998, 2010), Teaching Music Globally (2004), Musician and Teacher (2008), co-author of Music in Childhood (2013, fourth edition), co-editor of the Global Music Series and the Oxford Handbook on Children’s Musical Cultures (2013). She chairs the Advisory Board of Smithsonian Folkways and is an educational consultant for the historic recordings of Alan Lomax. Her coming works include co-authorship of Redefining Music Studies in an Age of Change (Routledge, 2017) and The Musically Vibrant Classroom: Music for Elementary Classroom Teachers (W. W. Norton, 2017). She is committed to connecting schools to communities, and children, youth, and teachers with artist-musicians and culture-bearers who live locally and have songs, stories, and artistic expressions to share—if only we would ask.