Whether in the sparse reggae-influenced beats of sibling-duo Wild Belle or in the expansive horns of “post-afrobeat” band NOMO, Elliot Bergman infuses every project with his love of the bright polyrhythms of West African and Caribbean music. There was always music around for Bergman: his mother, Susan, wrote songs for her four children, including “The Little Bird,” a tune Elliot would later pass on to Elizabeth Mitchell to record. Emerging from this music-filled childhood in Chicago, Bergman started NOMO with his classmates at University of Michigan in the early-2000s. While the band cites jazz, electronica, afrobeat, and world music as their primary inspirations, Bergman told ALARM that the band mostly sees themselves as a “melting pot of ideas and influences”: contemporary and American. While Bergman’s younger sister, Natalie, joined NOMO on tour as a teenager, the siblings set out to record Natalie’s songs as a duo. The resulting collaboration was Wild Belle, a band BBC Music lauds for their “deceptively sharp sunshine tune” and “surprising line in ground-shuddering dub wobbles.” In this month’s People’s Picks, the elder Bergman takes us from Oklahoma to Jamaica to Indonesia to Kenya to Nigeria, whirling through a world of Smithsonian Folkways sounds. 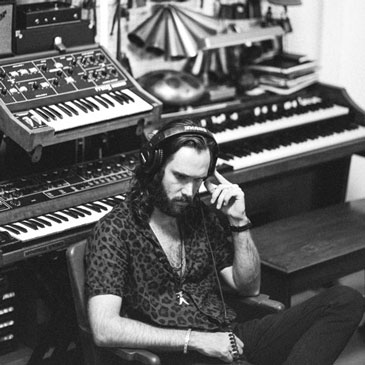 This was the first Folkways record I ever bought. It came in to the used record store where I worked in college, Encore Records in Ann Arbor, and I was immediately captivated by the image on the cover. I fell in love with Ronald Clyne’s cover designs and the packaging: extensive liner notes, the paper glued on to the vinyl sleeve. I was hooked. My entire paycheck would go to records, and during the time I worked at Encore, I managed to amass a nice little collection of Folkways LPs that continues to grow.

You think it’s just gonna be a nice little version of “O Susanna,” and then the band kicks in!

This is another record that I loved before I even heard it. The picture on the cover features the experimental composer surrounded by a bunch of cute girls on bicycles with speakers attached to them. Dreams really do come true!

Smithsonian Folkways has such and incredible wealth of gamelan music, you could spend months exploring the catalog. I had the privilege of studying gamelan and playing in the gamelan ensemble while I was in college. I played the bonang, which is a set of tuned gongs. The instruments that comprise a gamelan are usually as interesting to look at as they are to listen to, and Folkways does such a great job of documenting both the aural and visual beauty of the gamelan.

I remember the first time I heard the voice of Joseph Spence very clearly. I was on tour in Spain with my band NOMO, and our friend Rafa played a CD of his in the van on the way to Granada. The music was immediately familiar, yet otherworldly. I had never heard so much energy and mystery in a solo performer.

This is such a beautiful song and an amazing recording.

Track 9: “The Little Bird” by Elizabeth Mitchell from Blue Clouds

This is a song that my mother wrote for me when I was a child. I became friends with Elizabeth Mitchell through our mutual friend and collaborator, producer Warren Defever, his playlist here contains a number of amazing gems. I told Liz that my mom wrote songs for me when I was a kid, and she very sweetly asked me to send her some of them. If I remember correctly, I left her a voicemail where I sang the song, and then she and Warren worked up the nice version that you hear here.

It’s always good to know who is making the chirping sounds around you. I love the field recordings that Folkways produced. Another favorite of mine is Sounds of Insects, with a wasp on the cover. This one is not available for streaming or download, but is worth tracking down if you can find a vinyl copy.

Track 13: “Goma” by Dancers and Musicians from Siyu and Faza from Music of the Waswahili of Lamu, Kenya, Vol. 3: Secular Music

Lamu is an incredible place where different cultures come together on a small island.

Track 14: “Igbin Drums” from Drums of the Yoruba of Nigeria