The National Heritage Fellowship is the federal government’s highest award in the folk and traditional arts field in the United States. Given by the National Endowment for the Arts every year since 1982, the fellowships are awarded based on three criteria: 1) artistic excellence, 2) impact on their tradition, and 3) authenticity. “Authenticity” means that the artists represent something greater than themselves—an entire tradition―and that the people of their cultural community see them as keepers of their cornerstone traditions. 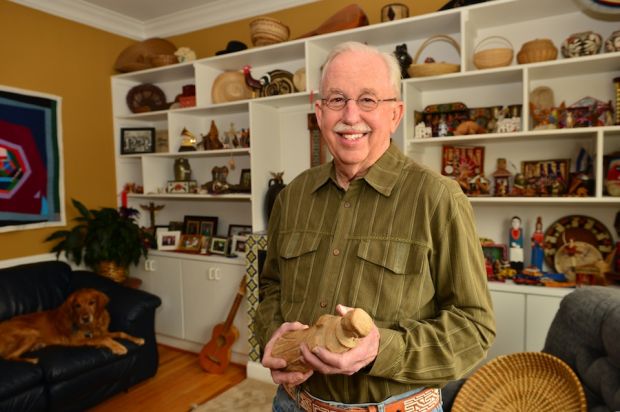 The Latino National Heritage Fellows in the field of music epitomize this. They reflect major areas of musical accomplishment in Latino USA, including flagship regional traditions such as Tejano, New Mexican, Puerto Rican, and regional Mexican traditions planted firmly in the Southwest. This playlist, drawn from the Folkways and Arhoolie collections at the Smithsonian, is only a partial representation of the full breadth of Latino musical accomplishment included among the National Heritage Fellows. Afro-Cuban batá drumming traditions and Puerto Rican música jíbara are other notable traditions included among the awardees.

This playlist is the first in a series promoting the 2017 Smithsonian Folklife Festival’s program American Folk: Celebrating the NEA National Heritage Fellows. Learn more about the program.

The son of Tejano conjunto pioneer accordionist and composer Santiago Jiménez, Sr., Leonardo “Flaco” Jiménez rose to be the most renowned of the Tejano accordionists from the late twentieth century onward. This song, written by his father, was the lead title of the 1987 Arhoolie album that won him the first of several GRAMMYs. Flaco was also recognized by the Recording Academy in 2015 with a Lifetime Achievement Award.

Button accordion player and composer Narciso Martínez was among the earliest of prominent Tejano accordion players. His primacy, along with his long lasting creativity, earned him the honorific nickname as “The Father of the Texas Mexican Conjunto.” Right at his side, though, was another National Heritage Fellow―Santiago Almeida. Almeida was the master of the weighty, twelve-stringed guitar called the bajo sexto, which played both bass notes and chords. Together they set the “DNA” of the style, which remains the core of the tradition to this day. Polkas such as this 1946 piece “Muchachos Alegres” have long been mainstays of the Tejano conjunto repertoire.

Tejana songster Lydia Mendoza made a name for herself starting in the early 1930s, singing in the Plaza de Zacate (Haymarket Plaza) of San Antonio and accompanying herself on the twelve-string guitar. Her voice became a signature sound of Tejano identity, and she was given the title “La Alondra de la Frontera” (The Lark of the Borderland). Some accounts claim she learned this Argentine tango-influenced song from lyrics printed on a bubble gum wrapper. She was among the first National Heritage Fellows in 1982.

José Gutiérrez immigrated to the United States from the ranchlands of Veracruz, Mexico, where he made a name for himself as a prominent practitioner of the regional music known as son jarocho. In the United States, he toured widely, was artist-in-residence at the University of Washington, and taught many apprentices his skills of both performing and making the three main jarocho instruments of harp, requinto (melody guitar), and jarana (rhythm guitar). Today, José has retired to his Veracruz homeland, though still performs regularly both in Mexico and the United States. “Siquisirí” often opens a performance of son jarocho, be it on a concert stage or in a house party.

Artemio Posadas was honored with the Bess Lomax Hawes National Heritage Fellowship in 2016, recognizing his work as cultural advocate and community organizer as well as musician in the tradition of the son huasteco. The son huasteco, notable for its use of falsetto voice to adorn the melody, is native to northwestern Mexico and practiced in Mexican American communities in California. This recording of “El Caballito” illustrates his work. He wrote the poetry for and produced this album with the renowned trio huasteco Los Camperos de Valles, and he sang lead voice on this track.

Northern New Mexico is home to the most ancient of Hispanic music traditions from the United States. Cleofes Vigil, from the village of San Cristóbal in the northernmost reaches of the state, wrote this rustic, solo ballad in the form of an indita, a colonial-era genre of music. He accompanies himself on the mandolin.

Guitarist-composer Roberto Martínez and his violinist-arranger son Lorenzo Martínez were awarded a National Heritage Fellowship jointly for their many years of collaboration and advocacy for their Hispanic music from northern New Mexico and southern Colorado. With the band Los Reyes de Albuquerque, they played old-time dance tunes and traditional songs, as well as corridos (narrative ballads) written by Roberto. This corrido, among his best known, tells the tale of selfless courage on the part of New Mexican American serviceman Daniel Fernández, who during the Vietnam War threw himself on top of a live grenade, sacrificing his own life to save those of his fellow soldiers.

In the 1960s, the farmworkers movement in California and the Southwest saw Chicano activism come to the fore of American life and the Chicano Civil Rights Movement blossom alongside the African American Civil Rights Movement. Delano farmworker Agustín Lira was part of both these important social change makers, as he first co-founded the activist theater group Teatro Campesino as part of the United Farmworkers union, and then went on to be a leader in the broader struggle for Chicano pride and civil rights. “Quihubo, Raza” is one of his signature compositions, saluting his Chicano listeners and drawing their attention to the need to confront injustices they have suffered.

Natividad “Nati” Cano looked to the tradition of mariachi music which he inherited from previous family generations as a way to build respect for Mexican heritage in the United States. His GRAMMY-winning group Mariachi Los Camperos de Nati Cano, earned GRAMMY Awards and other accolades for their high level of artistry. The National Heritage Fellowship also recognized his enormous efforts and impact in teaching the tradition to tens of thousands of young people throughout the United States. The song “Llegaron los Camperos” was ready-made to be the opening fanfare for thousands of his concerts.

Tejano accordionist-composer Tony de la Rosa marked a new era of conjunto music with his slow-paced polka beat that accompanied a gliding dance step called tacuachito (“little possum,” referring to the characteristic stride of the possum). His recording of “Atotonilco” with its staccato accordion playing stands as a signature piece of his that points to the sound that would influence generations to come.

Domingo “Mingo” Saldívar and his group the Tremendos Cuatro Espadas kept the conjunto “traditional” while accommodating his music to urban San Antonio tastes. The cumbia dance rhythm, heard here, made it to Texas from South America and Mexico, and Saldívar made it his own. He allowed greater freedom in the bajo sexto’s playing and often added English lyrics, in keeping with his bilingual audiences. He is also a natural showman, encouraging his listeners by dancing onstage.

Eduardo “Lalo” Guerrero was a pillar of urban Chicano music creation. From Tucson, Arizona, he relocated to Los Angeles and wrote a seemingly endless stream of pieces that captured urban Mexican American style and identity in the 1940s and 1950s. The dress fashion and cultural style of pachucos were featured in Luis Valdez’s musical Zoot Suit, which drew from Guerrero’s work. This “pachuco boogie” epitomizes the sound. Guerrero also was honored with a National Medal of Arts after he received the National Heritage Fellowship.

A driving force in the renaissance of Afro-Puerto Rican music in the late twentieth century, the New York City-based group Los Pleneros de la 21 was founded by percussionist Juan Gutiérrez. Juan drew from musical elders in NYC and Puerto Rico to infuse the music called plena with the strongest strands of Puerto Rican tradition available. As heard in this arrangement of “Carmelina,” he also invited contemporary jazz and salsa musicians such as trombonist Ángel “Papo” Vásquez and cuatro player Edgardo Miranda to add their creative sounds to the mix.

Daniel Sheehy is director and curator emeritus of Smithsonian Folkways Recordings, having served from 2000 to 2015. As director of Folk & Traditional Arts at the National Endowment for the Arts (1992-2000) and staff ethnomusicologist and assistant director (1978-1992), he directed the National Heritage Fellowship awards and grants programs. In 2015, the NEA awarded him a Bess Lomax Hawes National Heritage Fellowship.