Acclaimed young guitarist and Virginia native Daniel Bachman grew up steeped in the traditional music of the Commonwealth, drawing from and expanding on it in his own fingerstyle guitar albums including Seven Pines (Tompkins Square, 2013), Orange County Serenade (Bathetic, 2014), and the new LP River (Three Lobed, 2015). An avid music collector and fan of BRI’s Virginia Traditions albums, Bachman culled his favorites, adding a little home-state perspective. 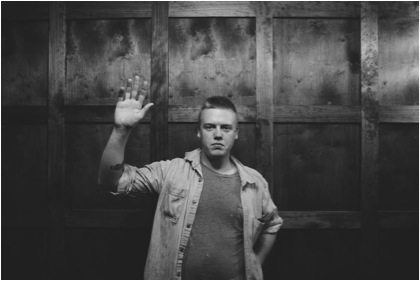 Track 1: “Wish to the Lord I’d Never Been Born” – Leonard Bowles and Irvin Cook
It seems appropriate that this is the first song on the playlist because it was the first I ever heard from the collection. They really fire this one out with a heavy, churning fiddle and two-finger banjo that scratches and stumbles for the duration of the song. Cook and Bowles lived in Henry County in the Martinsville/Danville area.

Track 15: “Tennessee Dog” – Jimmie Strothers
Jimmie Strothers was recorded by John Lomax and Harold Spivacke in 1936 at the State Farm in Richmond, Virginia, in Henrico County, where Strothers was an inmate at the time. His other song on here, “I Used to Work on the Tractor,” is great, but it’s no “Tennessee Dog.” This tune is a sales pitch of sorts, where he’s trying to hock the dog to a group of potential buyers. He claims that it can “catch more rats than any other cat on this side of [the] Mississippi River. . . . That dog, talking about that dog. He’s the meanest dog that come from Tennessee.”

Track 9: “The Devil’s Nine Questions” – Texas Gladden
Texas Gladden has a voice I don’t always want to put on and listen to. She was born into a musical family in Saltville, Virginia, in Smith and Washington Counties. Her roots can be traced back to 18th-century Irish fiddle players, and her brother was Hobart Smith. [Read more about Texas Gladden in Smithsonian Folkways artist and producer Stephen Wade’s The Beautiful Music All Around Us and find more of her recordings here.]

Track 18: “The Jealous Lover” – Stanley Brothers and the Clinch Mountain Boys
This is a very well-known song, but the soft, smooth sound they put on this is so warm and familiar. The claps from the audience and the laughter when Ralph forgets the words are great moments, and it’s a nice variation to have some live material on the album. This era of the Stanleys is unbeatable, and the lineup they had at the time left them at the top of their game. This show was recorded by Mike Seeger at Silver Creek Ranch outside of Manassas, Virginia, in 1956.

Track 2: “Penitentiary Blues” – John Tinsley
This disc might not have the best music of the series, but it does have the best photos. That being said, there are some really good songs on this one. John Tinsley has two of them. Born in 1920, he was recorded in the ’50s for Mutual Records. The heaviness of this song isn’t a put-on for tradition’s sake—John actually spent time in prison after shooting and wounding his stepfather. This was recorded in Basset in Henry County, Virginia.

Track 5: “Wont You Be Kind” – Luke Jordan
“He was never known to hold a regular job and his fondness for fishing and consuming alcohol is often reported by acquaintances.” Luke Jordan was born in Appomattox but lived in Lynchburg from the teens until his death in 1952.

Track 14: “The Pinnacle Mountain Silver Mine” – Helen Cockram
This may be one of my favorite songs in the whole series. It’s a standout track that Helen wrote in 1979 about a vein of silver tucked somewhere deep in the Pinnacle Mountains, in the Meadows of Dan area. Beautiful, sparse accompaniment carries Helen’s voice, with her husband (who had his own bluegrass band, The Virginia Mountain Boys, who recorded for Folkways in the ’70s) and their two friends on guitar and mandolin. Recorded in 1980 at the Heritage Records studio in Galax, Virginia.

Track 17: “The Ballad of Fancy Gap” – Jim and Artie Marshall
A close second on this record has to go to Jim Marshall with his trucker tune written about the treacherous pass north of Mt. Airy, North Carolina, on US 52 in the town of Fancy Gap. A trucker himself since 1940, Marshall recalls stories of other men who made their last ride through Fancy Gap prior to more modern highways being built connecting North Carolina and Virginia. “Now truckers take this warning, if you go through Fancy Gap, and you don’t slow that big rig down, the devil’s in your lap.”

Track 1: “Cumberland Gap” – Gary Patton
There are many versions of “Cumberland Gap,” and here’s another one. Gary Patton represents a younger generation of musicians who grew up around the Galax area and were fed country music from birth. Although not featured in this series, Patton is also an accomplished guitar and pedal steel player who for a time toured regularly as a professional musician, eventually giving it up due to the time away from home and family. Patton plays like he learned from Jerry Lee Lewis more than the people who actually taught him to play, but it’s a nice tune.

Track 3: “Big Bend Gal” – Dad Blackard’s Moonshiners
Dad Blackard’s Moonshiners were known around the Meadows of Dan area as the Shelor Family and recorded for Victor at the Bristol Sessions in 1927. Only the recorded material from this session offers the whole family on record. Although the records did sell, death and responsibility to family and work caused members of the family to go unrecorded for years. However, Clarice Shelor, the piano player, was later recorded and is included on the Heritage Label’s Old Virginia Favorites. [Lonesome River Band frontman and banjo player Sammy Shelor is a descendant of Dad Blackard.]

Track 5: “Barbershop Rag” – William Moore
My man William Moore is the musician on the series who’s from the area closest to where I grew up. Bill Moore was from Tappahannock, Virginia, a town on the Middle Peninsula on the Rappahannock River. He was by trade a barber—the “only barber in the world who can shave you and give you music while he’s doing it.” Born in 1893, Moore lived in the area until the mid-1940s when, as his health was declining, he relocated to Warrenton, Virginia, to be closer to his son. I’ve heard that William Moore is also a relative to John Jackson, another well-known Virginia guitar player (and Smithsonian Folkways artist) from west of the tidal plain in Rappahannock County, but I’ve never had that confirmed.

Track 6: “King Kong Blues” – The Back Porch Boys
The Back Porch Boys are Alec Seward and Louis Hayes. Although they both settled in New York City like so many others, Seward was from the southeastern, Newport News area of Virginia. Apparently not much is known about Hayes, although there seems to be some speculation that he may have been from Asheville, North Carolina. The two played together until either Hayes died or turned to ministry in the late 1950s. Together they recorded a number of great postwar records, this one being for the Apollo Record Company.

Track 1: “On a Monday” – John Williams and Group
“On a Monday” is a prison work song recorded by John and Alan Lomax in Richmond, Virginia, in 1936. The song tells the story of a black man being charged with an unknown crime and how quickly he found himself working in a coal mine camp.

Track 11: “Sleep On” – Lena Thompson, Lucy Scott, and Lucy Smith
This is a particularly interesting regional Virginia recording and one that I’m especially excited about, as I grew up eating a lot of crabs. The song narrative could take place in any number of Eastern Shore or coastal Virginia crab houses around that time. Behind the typical choruses heard on this tune is the sound of crab bodies and legs being cracked and packed into pint and quart containers. This particular recording was made in Northumberland County on the Northern Neck, at the Rappahannock Oyster Company.

Track 1: “Brownie Blues” – Steve Tarter and Harry Gay
There were not many black musicians from southwest Virginia recorded in the early days of the record industry. This record apparently sold well regionally, and the duo played around the area until Steve Tarter died in the mid-’30s. This is just as tight as can be—just wish that there was more to hear.

Track 5: “King Edward’s Blues” – King Edward Smith
First cousins of Hobart Smith and Texas Gladden, the Smith family, it seems, was a pretty heavy force in the Saltville area. This song is entirely instrumental—common for the Smiths. It’s likely that King learned much of his technique from records or from Hobart, who spent time in Bristol. King made this recording at age 71, in 1977 in Smyth County, Virginia.

Track 5: “Natural Bridge Blues” – Texas Troubadours
The Natural Bridge was originally bought by the king of England for 20 shillings and later bought by Thomas Jefferson, who called it “the most sublime of nature’s works.” “The Natural Bridge” is also a No Neck Blues Band song, and I’m not sure if it’s about the same Natural Bridge. After the bridge was up for sale for some time, the blues are now over—it was bought by a conservation group and will most likely become a state park.

Track 7: “True Blue Bill” – Johnnie Autry
Not much is said about John Autry in the liner notes, and his listing among “Lesser-Known Figures in Roanoke Country Radio” lends him a bit of a mystery. The text also says that his real name may have been Weiss. It seems like he came to Roanoke from Harrisonburg, just up the road. At this time it also seems that he was recording with the Texas Troubadours in Roanoke. Whatever his story, I’d have to agree with him when he says in this cut, “It seems like the whole state’s full of good entertainers.”