The Black Twig Pickers are an experimental old-time string band from Virginia and North Carolina who draw inspiration from both traditional and experimental sources. Band members Sally Anne Morgan, Nathan Bowles, and Mike Gangloff utilize the expansiveness of the Smithsonian Folkways collection in this diverse selection of recordings, presenting a playlist that, like their own music, leans heavily on American traditional music while also reaching beyond. 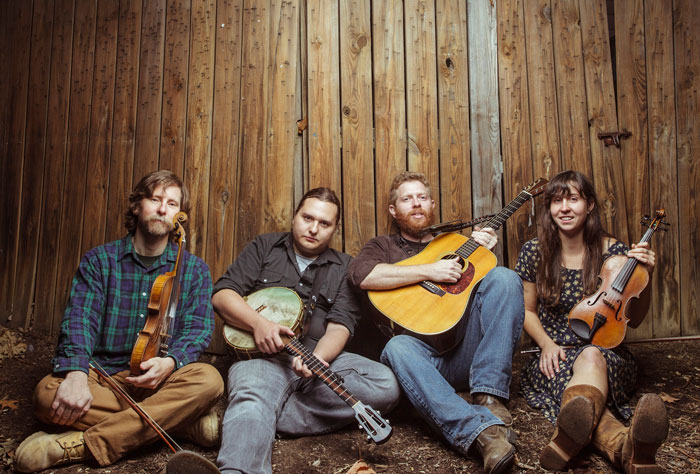 Sally: A happy harmonica and bones blues, with plenty of whooping.

Mike: More fiddlers should let their boxes get bashed at by fiddlesticks. Here two Balfas and two Schwarzes let the sticks push them through a smooth and chugging take on this old Cajun song.

Track 3: “La Llamerada” from Songs and Dances of Bolivia

Nathan: Music of the Bolivian llama herders. This stuff has always fascinated me, the simultaneous celebratory and mournful chord changes, the strummed guitar and flute. I tend to be drawn to music that’s difficult to situate emotionally.

Sally: I hadn’t heard of Almeda Riddle until I read Shirley Collins’s autobiography, and she described recording her with Alan Lomax on one of their Southern Journey field trips. Almeda was from Arkansas and survived a tornado that killed her husband. I love how she talks about her grandmother’s rocking chair and raising babies, then sings this awesome lullaby.

Track 5: “I Need More Power” by Prisoners at the Ramsey and Retrieve State Farms, Texas, from Negro Prison Camp Worksongs

Mike: Inmates at a Texas prison farm reflect on a basic condition of existence, recorded by Pete and Toshi Seeger in 1951.

Sally: Mountain Music of Kentucky is one my favorite Folkways records that I own, and I feel there is something so powerfully haunting and unique about the traditional music coming out of eastern Kentucky. I had the pleasure of meeting Lee Sexton and hearing him play at the Cowan Creek Music School a couple of years ago. It’s pretty cool to realize that this person on a revered and classic 1960s Folkways recording is just a regular old person, still happy to play and teach young’uns.

Track 7: “Glory Glory When I Lay My Burden Down” by Joseph Spence from Joseph Spence: The Complete Folkways Recordings, 1958

Nathan: From the 1958 sessions on Andros Island. I think that’s his wife in the background. Also recommended is his tranced-out, 14-minute take on “I Am Living on the Hallelujah Side” from his Happy All the Time LP.

Mike: I love the sampeq duets on this album and the melody to this one, or maybe the stately way that Lunda Luhat and PeLimbu tackle it, feels like it could have floated out of the Appalachian mountains as easily as the Indonesian forests. It was recorded in 1995 in East Borneo.

Track 9: “The Unclouded Days” by Pete Steele from Banjo Tunes and Songs

Sally: There is something about the harmonizing of Pete and Lilly Steele that always gives me shivers.

Track 10: “Kalyan” by Sakar Khan from Musical Instruments of Rajasthan: The Kamaicha

Mike: Rajasthan float-fiddling from the late Sakar Khan on this raga that I think is another name for Yaman.

Sally: Etta Baker played guitar for 90 years, and I wish she got more credit among contemporary finger-style guitarists.

Sally: We play a version of this tune, but I’ve always loved a good rollicking piano, and Hobart does it right. He was born right down the road in Saltville, Virginia, and had an equally talented sister, the ballad singer Texas Gladden.

Mike: Okay, so I’m not getting off the Music of Indonesia Series yet. It’s too good. This music from the Sekaha Sekar Karya group is a sort of soundtrack to a puppet show (I’m imagining our friends Anna Roberts-Gevalt and Elizabeth Laprelle’s crankies here, but with gongs). The notes say that this particular motif is played when characters “travel without great urgency: it would be appropriate for characters walking through the forest, but not if they were flying or running to take part in a battle.” I'm trying to imagine such agreement about the function and moods of fiddle tunes.

Track 14: “The Day Is Past and Gone” by Dorothy Melton from Music from the South, Vol. 8: Young Songsters

Sally: I think this is a Primitive Baptist Hymn. It’s a really powerful one (I suppose they all are). Lately I’ve been really inspired by some of these Baptist Hymns. My friend and great musician Sarah Louise does a really cool version of this.