Detroit-based musician and producer Warren Defever’s music and engineering work has intersected with Smithsonian Folkways since he first heard recordings of Woody Guthrie as a child. Founder of the longtime experimental rock band His Name Is Alive, and with the likes of Yoko Ono, Thurston Moore, Iggy and The Stooges, Low, and Folkways artist Michael Hurley among his clients and collaborators, Defever has also worked with Smithsonian Folkways as producer, recording engineer, and mixer on four Elizabeth Mitchell releases. 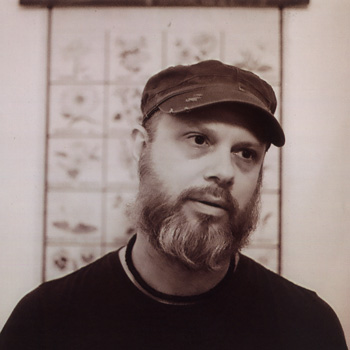 In this playlist, Warren compiled a diverse selection of tracks that embody those Folkways connections, from recordings he produced and artists he’s recorded to sounds and songs like Gaither Carlton’s “Look Down That Lonesome Road” that have inspired his own music.

I like to think of this as the first song ever recorded; it sounds like an actual recording from the beginning of the dawn of time, maybe even a little bit before. I should also mention that [compiler, recorder, and producer] Colin Turnbull’s book The Forest People is pretty good and that there’s a sample of this on SPK’s excellent album, Zamia Lehmanni: Songs of Byzantine Flowers.

Woody Guthrie was my first introduction to Folkways, and Lead Belly was probably a close second. This is a great example of my GRAMMY-nominated production work with Elizabeth Mitchell and was recorded in my parents’ basement in Livonia, Michigan. Recorded with an RCA 77D ribbon mic, not coincidentally also Alan Lomax’s microphone of choice.

There’s a documentary I saw on PBS that I taped on VHS called Dreadful Memories about Sarah Ogan Gunning, who wrote the song “I Hate the Capitalist System,” and it’s pretty much everything you need to know about politics and music. I had a band called the ESP FAMILY that covered this song and put out a seven-inch in the year 1995.

Aunt Molly was Sarah Ogan’s aunt, and she’s featured in the above-mentioned documentary. She’s a hero, a folk legend, a revolutionary. There’s another album she did that’s not on Folkways but is also required listening.

Track 5: “Look Down That Lonesome Road” by Gaither Carlton from Classic Old-Time Music from Smithsonian Folkways

Gaither Carlton was Doc Watson’s stepfather and probably the only person ever named Gaither. This song and “Hicks’ Farewell” really go to the dark place.

Track 6: “Acetylene Torch” from The Sounds of the Junk Yard

Folkways is well known for its recordings of industrial sounds and exotic field recordings, but I promised I wouldn’t include any songs from the Sounds of North American Frogs (which I did an edit of, removing all the spoken bits—which I always felt distracted from the frog jams).

Track 7: “At the Zoo: Introduction and Tiger” by Arthur Merwin Greenhall from Sounds of Animals

Recorded at the Detroit Zoo, which a lot of people outside of Michigan probably don’t realize is not actually located within the city limits of Detroit but in the suburbs.

Lead Belly was not only a sick guitar player, but here he runs wild with an accordion.

No description or words necessary.

My friend Greg Baise borrowed this album and The Sounds of the Junk Yard from me when we were in high school. Twenty years later I finally got them back. For years he would torture me with references to the lyrics or details that I absolutely had no recollection of because I hadn’t heard them since I was sixteen.

Track 12: “Indio y Negro (Black and Indian)” by Suni Paz from Brotando del Silencio – Breaking Out of the Silence

I hung out with Suni Paz in New York a couple years ago. She’s one of the best guitar players and best storytellers I’ve ever met, and she can even jam on a dried-out old armadillo shell with a couple strings stretched across. She gave me a copy of her book, and I highly recommend it. She’s one of the great revolutionary women documented by Folkways.

Track 13: “The Werewolf Song” by Michael Hurley from First Songs

I recorded an album with Michael Hurley in Levon Helm’s barn in Woodstock, New York, a few years ago. He was howling in 1964, he was howling in 2004, and wherever he’s playing tonight he’s still howling now.

I also recorded this song in Levon Helm’s barn—you can hear him count it off at the beginning. That man loved the cowbell. He didn’t seem that old, but he told us stories about playing traveling medicine shows down South when he was a kid. He sounds like he learned how to play drums while riding a horse.

Track 15: “Mr. Postman Die” by Moving Star Hall Singers from Been in the Storm So Long: A Collection of Spirituals, Folk Tales and Children’s Games from Johns Island, SC

Bessie Jones comes from that school of children’s music where it’s okay to talk about death, dying, dirty dancing, dropping babies, getting hit in the head, and getting shot at -- topics that not everyone in the modern children’s music scene feels are okay subjects for kids.