Indie pop duo Sylvan Esso has garnered both critical and popular acclaim for their expert pairing of gentle folk vocals with textured electronic production. Making their home in Durham, North Carolina, vocalist Amelia Meath and producer Nick Sanborn are well acquainted with the folk tradition. Not only is Sanborn formerly of psychedelic folk band Megafaun, but Meath was also a member of Mountain Man, a group whose original songs prompted the Chicago Tribune to remark that their music could easily be “covers of protofolk tunes gleaned from old Smithsonian field recording compilations.” This folk sensibility follows Meath to Sylvan Esso, where it complements Sanborn’s hip hop instrumentals.

Meath and Sanborn aren’t strangers to the Smithsonian Folkways collection either: in a recent visit to Amoeba Records they included the 1958 Folkways album We’ve Got Some Singing to Doand the 1982 release Born of Another Time: Songs of the Sailors – Songs of the Seain their haul. In their People’s Picks Playlist, the pair highlights their favorite world music from Smithsonian Folkways Recordings, curating a list of field recordings that draw the listener in with the same sort of dynamic percussion and haunting vocals that they weave through their own music. 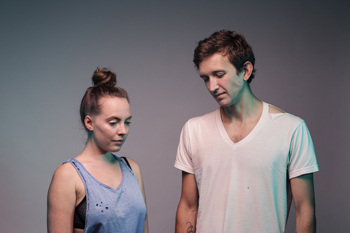 One thing I love about the Smithsonian Folkways records is that they treat recording as pure documentation. You're acutely aware when you listen to them that you're hearing a document of a specific time and place, something that never happened again in quite the same way. This great record of North American frog songs is both mysterious and wonderful, and I love how it immediately puts me in the mindset to accept any sound as music, to recognize the beauty in field recordings and other non-western sounds.

The whole North Indian Folk Music record is pretty great (I'll get to another cut later on), but "Kajri" gets me every time. That section right after the intro where the drums kick back in at a faster tempo? You can't not move to this. Such a jam.

This album is one of my all-time favorites in the Folkways collection. The singing is just so otherworldly and melodic, and it's full of these occasion-specific songs and chants. I love the interplay of the two voices here and the insistent percussion of their labor; you feel like you're right there with them.

I was only first introduced to Kenyan music through the great band Extra Golden (listen to them, they're amazing), and now I adore it. This song is just so relaxing, I feel like I'm watching a sunset when I listen to it.

Track 5: “Marimba Instrumental” by Colorado man in his forties from Lowland Tribes of Ecuador

I could go for a whole record of this. I wish we knew who this "Colorado man in his forties" was, because I bet he kicked out some serious jams. Listen for the beautiful accompaniment provided by the singing birds in the background.

Another great cut from the Lowland Tribes of Ecuador album. I love waiting for the main singer to breathe; he's superhuman in his breath control. I should mention here that while it's wonderful these records are available to stream, I don't think Spotify is the greatest way to listen to them since it robs them of their gorgeous and often emotionally devastating context. One of my favorite things about listening to these on vinyl (something I would highly recommend) is sitting with the beautiful books of liner notes that accompany each album and explain the story of the songs themselves, the performers, and the journey to record them. The notes for this album in particular describe the beginning of the end of these tribes' way of life, as immigrants began to infiltrate the rainforest. They're even online in pdf format — check out this album's notes here.

What a classic album, you should just go listen to the whole thing. Amelia introduced me to this one, and it completely changed the way I think about vocal music. A beautiful and irreplaceable document of their culture.

Quick mid-playlist reminder from the frogs to keep my brain and ears wide open, this time with the help of that album's deep-voiced and often hilarious narrator (the way he says "protruberances" gets me every time).

This cut from Traditional Women's Music from Ghana is a perfect example of how cool the rest of the record is, full of beautiful choral ensemble singing and African percussion. You can feel the room pulsing when you listen to it.

Track 11: “Song of Marriage” by Young girl from Mountain Music of Peru, Vol. 1

This one gets me every time. What an unreal performance. Yet another example to sit with the liner notes, as this album's notes are second to none in their ability to contextualize what you're listening to. From those notes, here's the rough translation of what this girl is singing:

You took me to have a bath because you thought I was dirty,
(chorus): (girl says about herself) Fool, stupid.

You took me to church on Sunday; I thought it was time for Mass,
Fool, stupid.

The band played, I thought it was your birthday,
Fool, stupid.

When we lit the candles, I thought it was because it was dark,
Fool, stupid.

When the rice fell on my head I thought it was hailing,
Fool, stupid.

When your house was filled with people, I thought it was my birthday,
Fool, stupid.

When we got into bed I thought it was because I was afraid
and you were comforting me,
Fool, stupid.

Another beautiful recording from Mountain Music of Peru.

Like most other people who make instrumental beat music, I love listening to percussion records. The collection has so much great stuff on it, I feel like it expands my rhythmic palette every time I listen.

While we're talking dope drum recordings, how about an interlude from the Cult Music of Cuba collection? Bonus points for great tape hiss.

Track 16: “Zerbaphali Solo” by Malang from Music of Afghanistan

More insane percussion work. This record was one of my favorite discoveries while putting this list together. What a beautiful interplay between the two musicians; it's as though they are extensions of one another. Almost trance-inducing.

Two pieces from the strange and beautiful Tuva collection. The first uses throat singing in a way I had never heard before, so gentle and melodic, it reminds me of John Lurie's saxophone playing. The second is a devastating recording of a funeral lament, one that makes me feel as though no funeral I have ever been to truly captured the weight of grief.

One more penultimate maize-pounder before we go. Damn, this Mozambique record is so cool.

Track 20: “Dhun on the Shahnai” by Hiralal and party from India: North Indian Folk Music