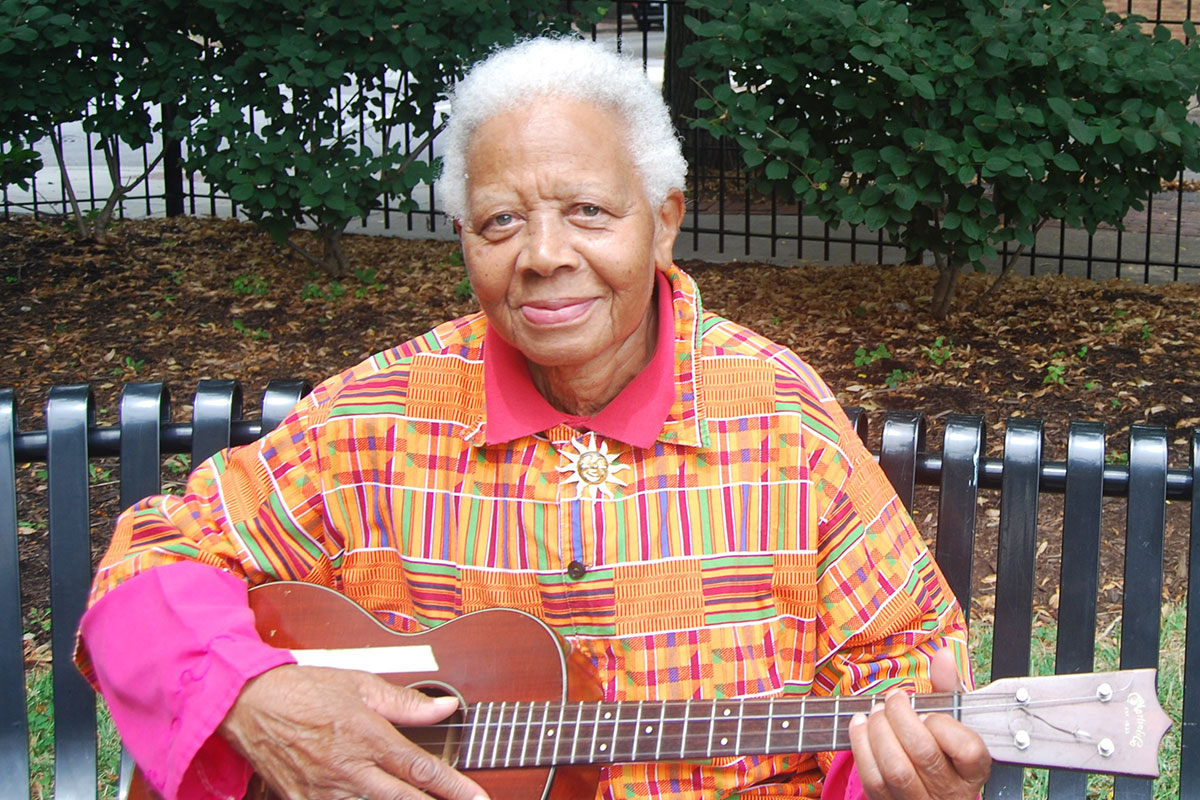 The legacy of Ella Jenkins is a musical one. Born in St. Louis, Missouri, in 1924, she spent her childhood on the south side of Chicago. Her parents had come up from the south, a part of the Great Migration of black southerners who sought economic freedom in the North. From the 1920s on into the 1940s, her Chicago neighborhood was rich with live music—singing games, rhymes and rhythms, blues, blues-flavored folk songs, and the spirituals and gospel music of the local churches. Ella was surrounded with song from her earliest years, and she grew up under the influence of her “Uncle Flood,” who played blues harmonica and introduced her to the music of T-Bone Walker, Memphis Slim, and Big Bill Broonzy. She also heard live the music of Cab Calloway and Count Basie, who played at The Regal Theater, an important music venue in Chicago’s Bronzeville neighborhood.

END_OF_DOCUMENT_TOKEN_TO_BE_REPLACED

Ella couldn’t keep from singing, not in her youth and not in all the years she worked with children and the parents and teachers who raise them. She studied sociology, child psychology and recreation at San Francisco State University, and was drawn to the music of her own and other cultures. While working in youth camps and then as a YWCA program director for teens in the early 1950s, she led singing sessions that featured folk and traditional songs from her neighborhood, songs she was learning from Spanish-speaking friends, songs she happened across in Hebrew, Arabic, and French, and from India and the African continent, and songs she’d written. Ella had learned to play harmonica from her uncle, and could play an assortment of percussion instruments, along with the guitar and the ukulele. She could recall the rhythms she had internalized from her own childhood, and she set them in motion in her work with children at “the Y.” She was invited to appear on a Chicago public television show, and soon became the host of a program for children called “This is Rhythm.”

It was Ella’s decision to become a children’s singer, and thus she began her career as a professional touring musician, performing for school assemblies across the nation. She loved the children and had the magic touch for inspiring their engagement in song and rhythm. Her singing was melodious, her percussive rhythms were crisp and clear, and her descriptions and directions for participatory musical experiences were always straightforward. Word spread about this childsong-singer who could make her way into groups of children and set them to singing and “rhythmicking.” Ella was composing and arranging songs and chants that she knew would entice and motivate singing in schools and preschools, and at teachers’ conferences and family concerts. She sought and succeeded in developing children’s musical repertoire and skill, even as they also gained in cultural understanding through the music they learned.

At Folkways Records in New York, Moses Asch was already committed to recording children’s music when he heard Ella’s songs, and he worked in 1957 to release her first album, Call-and-Response: Rhythmic Group Singing—a collection of eight chants created by Jenkins and inspired by West African traditions featuring conga drums, wood blocks, and other instruments typical of school classrooms. Ella’s strong and melodious voice carried the chants and songs with warmth and enthusiasm to her listeners and directed them to a participatory experience in selected melodies and rhythms.

This was the beginning of Ella’s legacy of 32 recordings of music for children over the next half-century, where one Folkways recording led to another, then to Smithsonian Folkways Recordings beginning in 1987, and then to CD reissues and anniversary (and cELLAbration) collections. Her recorded repertoire resounds with nursery rhymes, bilingual songs, African American folk songs, and international songs, and nine recordings that pay tribute to “rhythm”—non-pitched rhythmic chants, rhythmic movement, and the rhythm instruments of classroom use. Some of her best-known tunes seeped into the standard school repertoire for children, too, so that children and their teachers have been singing for several generations the likes of “You’ll Sing a Song and I’ll Sing a Song” and “Did You Feed My Cow?” Ella also popularized African American heritage songs like “I’m On My Way to Canaan Land,” “Hambone,” “This Train,” and “He’s Got the Whole World in His Hands,” bringing them into her recordings and live performances for children, their families, and their teachers.

Through all her engagements, Ella remains thoroughly at home with children. She has long valued their inherent expressive ability, and she recognized early on that children have something to sing about. She has helped others see that children’s ways may be expressed through song, and that much of what they need to know of their language, heritage, and cultural concepts may be communicated to them through song. Her interest in children’s learning their world is genuine, and her understanding of how they learn is apparent in her lively and engaging interaction with them—live and on her recordings. Ella’s songs are replete with phrases short enough for children to remember and repeat.

She playfully works in call-and-response exchanges, the sort of classroom “first me and now you” repartee between effective teachers and their young students. She supplies songs that allow for children’s penchant to imitate and to sink into the musical matter when, verse by verse, as little as a single word will change while the melody stays precisely the same. She tells stories about her songs, too, giving them context and further meaning. Her songs beckon children to lift their voices in song, to share in the rhythms, and to join in a full and enthusiastic musical participation.

Ella Jenkins wears well the title of “First Lady of Children’s Music.” She has been a familiar voice—and face—on TV, including Barney and Friends, and Mister Rogers’ Neighborhood. She earned a Grammy Lifetime Achievement Award in 2004, and her recordings have received numerous awards from the likes of Parents’ Choice and ASCAP. Ella continues with energy and verve well into her ninth decade as a leading singer of children’s songs, and as a rare model of the music that best suits the lives and learning styles of children.

Ella’s legacy is wrapped in a vast treasury of children’s music from near and far, and it reaches across cultural boundaries while also holding to the songful expressions of her own African American heritage. As she recalls her own childhood memories on Chicago’s south side, and her visits with grandparents still living in the rural south, Ella Jenkins sings and plays her way through some of the rich repertoire that have made her who she musically is. Ella’s legacy is her music and the child-centered ways in which she communicates it now, as she always has. 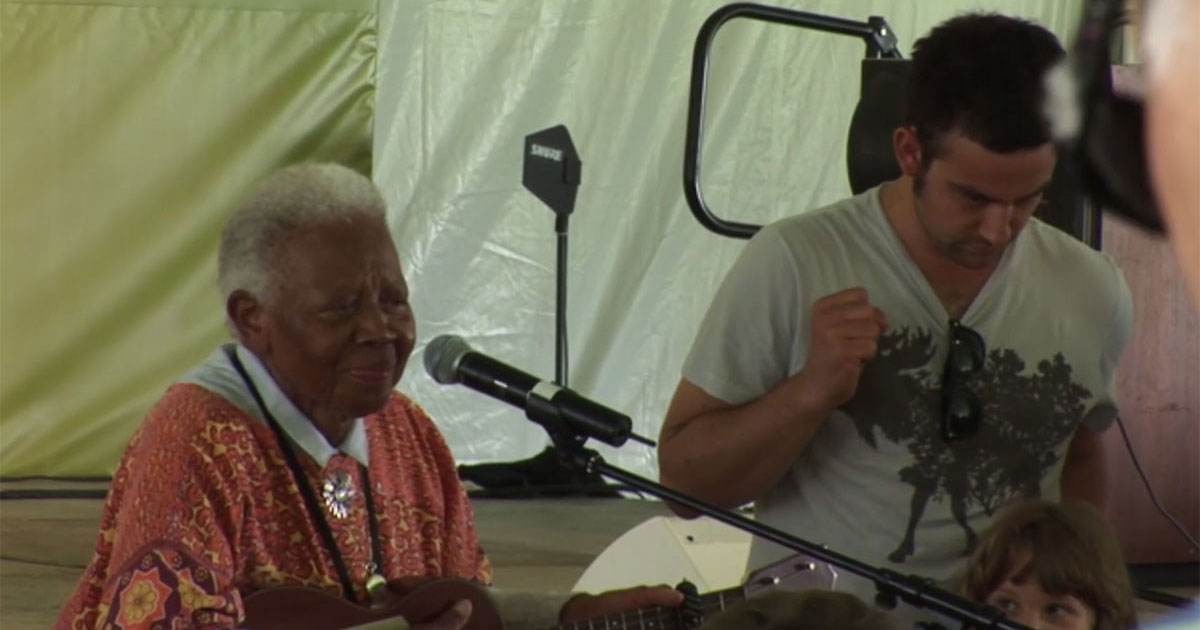 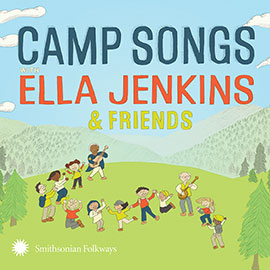 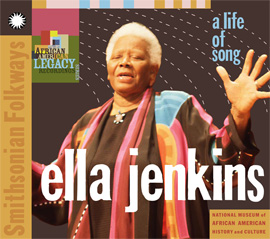