A community of singers and songwriters 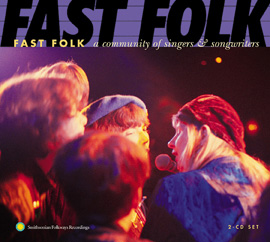 Suzanne Vega was the first subscription manager of The Fast Folk Musical Magazine in 1982. She entered each subscription by hand into a book.

Folk music wasn't just something that happened in the 1960s. The sound and the scene continued to thrive throughout the 1980s and 1990s, mostly because of the efforts of Fast Folk, a group of singers and songwriters who came together in 1982 in New York City to mutually support and promote their own work. This 2002 double disc set from Smithsonian Folkways Recordings celebrates the 20th Anniversary of Fast Folk, making their music commercially available for the first time and honoring a significant chapter in American folk music that is often overlooked.

It wasn't easy to be a folk musician in the early 1980s in New York City. Greenwich Village, the home of the 1960s folk scene was now domintated by punks and New Wavers, and record companies, so quick to cash in on folk in the 1960s and 1970s, now ignored folk muscians, deeming them uncommercial. Founded by singer-songwriter Jack Hardy with the help of the venerable Dave Van Ronk, Fast Folk brought together folk musicians in an effort to develop their skills and strengthen their presence in the community. The singers and songwriters of Fast Folk brought their work to the public by creating a performance space at the SpeakEasy restaurant in the Village and starting an ambitious monthly magazine accompanied each issue by an LP (later CDs) of new songs generated by the scene.

The Fast Folk Musical Magazine, edited by Hardy and Richard Meyer, put out 105 issues from 1982 to 1997, recording well over a thousand songs. Meyer recalls, "The purpose of Fast Folk was to create a myth of a contemporary scene in the Village with a club, recordings, and press, and then live up to it. This wasn't hard because there were prolific writers with great songs." Fast Folk included established artists such as Van Ronk and launched the careers of musicians such as Shawn Colvin, Christine Lavin, Steve Forbert, and Suzanne Vega.

In the Fast Folk scene, endless hours were spent discussing and debating songs and the process of writing. The editors encouraged ambitious songwriting, and guided experienced as well as beginning writers toward their best material. According to Meyer, "A guiding principle of Fast Folk recordings was that the singer would have one take to commit a song to tape. He could have a second chance but had to erase the first take. This kept everyone focused. We didn't waste time or tape." The process built a strong community of skilled musicians that had an extraordinary effect on American singer-songwriters in the 1980s and 1990s.

In 1999, Fast Folk's recordings, records, press clippings, and magazines were dontated to the Smithsonian Center for Folklife and Cultural Heritage, making a strong addition to our collections, which already include artists from the 1960s and 1970s. Hardy and Meyer sat down with Smithsonian Folkways Recordings for this 20th Anniversary project and hand picked two discs worth of songs that best represented Fast Folk during its first 20 years. As editors of The Fast Folk Musical Magazine, Hardy and Meyer listened to thousands of songs live and through submissions sent to the magazine. Their expertise generated a collection of honest and heartfelt songs from a scene whose influence is still heard today.

Fast Folk: A Community of Singers and Songwriters includes extensive liner notes, annotations, and photos. All 105 Fast Folk Recordings are available to the public through Smithsonian Folkways Recordings and future commercial anthologies are being planned.

Suzanne Vega was the first subscription manager of The Fast Folk Musical Magazine in 1982. She entered each subscription by hand into a book.