The New Lost City Ramblers pioneered the renaissance of southern mountain music that grew out of the post-World War II folk music revival the late 1950s and 1960s. Formed in 1958 by Mike Seeger, John Cohen, and Tom Paley (replaced in 1962 by Tracy Schwarz), The New Lost City Ramblers introduced northern urban audiences to what they judged to be "authentic" southern folk traditions at a time when the urban revival was dominated by popular and artsy interpreters of folk music.

All four Ramblers were born in New York City and as youngsters had no personal contact with the rural southern culture and music that would so captivate them as young adults. Yet each experienced the sounds of southern country music at an early age. Mike Seeger, the son of the erudite musicologist Charles Seeger and ultra-modernist composer Ruth Crawford Seeger, was literally reared on folk music field recordings that his parents spent years transcribing in their home in suburban Washington, D.C. John Cohen, a native of Queens and suburban Long Island, grew up hearing folk music at leftist Catskill summer camps and helped organize hoots at Yale, where he received his BA and MA degrees in art and photography. Bronx-born Tom Paley collected old 78 rpm hillbilly records and followed Woody Guthrie around before entering graduate school at Yale to study mathematics. Tracy Schwarz, the son of an investment banker and classically trained pianist, was fascinated by the snatches of country radio that infiltrated the airways of his suburban New Jersey home. Though city born and suburban bred, the Ramblers immersed themselves in the sounds of traditional southern mountain music, initially through scratchy records and Library of Congress recordings, and later through visits to the South to meet, record, and commune with rural artists.

Following the their first public appearance at the Carnegie Recital Hall in September 1958, the Ramblers were thrust to the forefront of what came to be known as the "traditionalist" or "purist" wing of the folk music revival. In their first four years Mike, John, and Tom turned out nine Folkways LPs and two EPs, and played over a hundred and fifty engagements at folk festivals, urban clubs, and college campuses. On disc and on stage their ability to emulate with remarkable accuracy the instrumentation, styles, and repertories of southern mountain string band and early bluegrass groups made them unique among city players.

When Tom Paley left the Ramblers in the summer of 1962, the group lost a superb guitarist and banjoist whose sardonic wit had become a hallmark of the Ramblers' stage shows. But Tracy Schwarz was an outstanding fiddler and vocalist whose presence freed Mike from his fiddling duties to spend more time on the banjo and mandolin. Tracy enabled the trio to expand its repertoire to include more bluegrass and 1940s country songs as well as older ballads, which he sang in a plaintive, unaccompanied mountain style. The Ramblers would go on to produce another seven Folkways LPs and play hundreds of live shows with Tracy until they curtailed their touring activities in the mid-1970s.

The Ramblers' musical achievements alone were sufficient to earn them a significant place in the history of the postwar folk revival. But that was only part of their story, for unlike most urban folk musicians, they were not satisfied to learn tunes and techniques solely from records or at song swaps. Rather, they insisted on traveling back to the source. They hauled tape recorders and cameras south to document the lives and music of scores of traditional folk musicians. They shared that music with city fans through the Folkways recordings they produced, and arranged for southern artists to appear at festivals and folk music venues throughout the Northeast, Midwest, and West Coast. Thanks to their efforts, traditional artists Elizabeth Cotten, Roscoe Holcomb, Dock Boggs, Tom Ashley, Cousin Emmy, Eck Robertson, and Maybelle Carter—to name but a few—were welcomed into the 1960s folk music revival.

In addition a full-length book on the Ramblers is now being completed by this writer. Keep an eye out for Gone to the Country: The New Lost City Ramblers and the Urban Folk Music Revival. 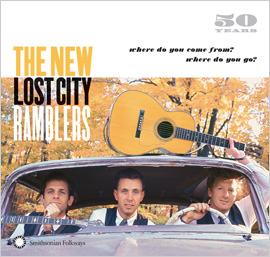