In the fall of 1951, Moses Asch was asked by the American Museum of Natural History (AMNH) to create a soundtrack for their upcoming exhibit, Men of the Montaña. Focusing on a group of eight Peruvian tribes that one reporter identified as "the hillbillies of the Upper Amazon," the exhibit was promoted as the first time that recorded sound had been used to accompany a museum exhibit. The results were an overwhelming success; it would go on to be the longest running special exhibit in the museum's history, and the New York Times lauded it for its "unusual use" of color, sound, lighting, and arrangement. But the sound component was more unusual than most visitors would ever know. Asch's "Peruvian" soundtrack did not come from Peru at all, but from locations in Panama, Connecticut, the Bronx Zoo, and a Manhattan bathtub. With the success of the exhibit, Sounds of a Tropical Rain Forest in America was commercially released the following year, as the first installment in the Folkways Science Series.1

The Folkways Science Series was built, like so many other aspects of the Folkways collection, with the help of a variety of outside recordists and specialists. For the first Science Series record, Asch enlisted the help of Cornell ornithologist Peter Paul Kellogg, a recording pioneer in his own right for his work with birds in the 1930s. In a letter to Kellogg dated September 18, 1951, Asch details his vision for the series:

I am very much interested in issuing a series of ‘nature and science’ records in which I will attempt to reproduce the sounds within the content of time etc. and in the drama inherent therein, rather than in the way it has been done up to now of identifying each sound by the spoken word, description.

This seemingly simple idea was actually a dramatic shift in how nature records were produced and understood. The older model was based on a traditional in-person science lecture, with a professional who would announce and often describe what listeners were about to hear. This model did not go away overnight; in fact, many Science Series records employed it through the 1970s. But Asch no longer wanted to reproduce lectures, he wanted to use the medium of sound and the material of nature to create a sonic narrative.

To create this particular narrative, Asch utilized many techniques that were already common in both the popular cinema and the experimental music of the mid-century: cross-cutting, tape splicing, and combining material from diverse sources into the same "scene." He did this with the explicit blessing of the museum staff; it was curator Dr. Harry Tschopik who told Asch that Kellogg had a good recording of rain forest sounds from Panama. Upon request, Kellogg agreed to share them, and after the exhibit opened, Asch again wrote to Kellogg to tell him that the recording seemed to be "accepted by the public." As if afraid of being exposed for using Panamanian material in a Peruvian exhibit, Asch expressed relief that the recording had "passed."

But once it passed, the story of Sounds of a Tropical Rain Forest in America was really just beginning. Because of its connection with the much-celebrated museum exhibit, it was subjected to some of the highest scrutiny of any Science Series release. While it is clear that Asch et al. did their best to present the Science Series as, well, "science," what actually happened was a creative endeavor that reveals larger insights into the culture and commodification of environmental sounds.

As the liner notes of the record indicate, the animals and staff of the Bronx Zoo were major players in its production. One of the most detailed accounts of this side of the story comes from New York Times journalist Meyer Berger, who covers it for one of his "About New York" columns.2 Large parts of the article correspond with the liner notes. Berger discusses the importance of the Bronx Zoo, where for months, Mr. Asch was literally up before the birds in order to record them. His persistence was to no avail for the problematic macaw, which only made a few noises, even when they played it a tape of a female bird. However, Asch did finally get the bird to vocalize when he played back the macaw's own taped voice, which got it "to bawl itself out long enough to satisfy the museum folk." Needing more sound for crickets, Asch embarked on an eighteen-hour field trip in Connecticut, where he recorded the crickets both in the morning and in the evening. The use of this Connecticut cricket was actually caught by one museum patron who was an expert on them. Upon hearing the record in the museum, he exclaimed, "That sounds like a Yankee cricket!"3

Even with these trips to the zoo and to other parts of New England, it appears as if Asch still did not have all of the material that he needed. In an interview with historian Peter Goldsmith, Sam Charters (a longtime Folkways recordist) says that Asch and business partner Fred Ramsey, wanting more rain sounds, lined Ramsey's bathtub with newspaper, turned the faucet on, and recorded the results. This became, by far, the most widely circulated story about the record. Despite Folkways’ attempts to dismiss the story, the likelihood of its factuality remains high. Almost immediately after the exhibit opened in 1951, the story was recounted as fact in the monthly internal newsletter for the AMNH staff.4

Once all of the sounds were compiled, Asch's original aesthetic ideas for the Science Series were applied. It was arranged without a narrator, with one to two minutes of sound standing in for each hour of the day. After this, a test pressing was made and played to all of the people connected with the project. The resulting criticism noted that the sounds were too numerous and clustered. After things were pared down and spaced out, the original tape was transferred to record and given to the museum.

With surprisingly little sense of irony, even the people who documented the strange ways that this album was recorded made affirmative statements regarding its authenticity. Berger, early in his article, says that the methods were undertaken because the curators firmly insisted on an "authentic background." Likewise, Goldsmith, after the bathtub anecdote, interjects that few doubted the album's authenticity. But what is it, exactly, that this album accurately portrays? It certainly does not portray the Peruvian rain forest—or any rain forest, for that matter.

Ultimately, Sounds of a Tropical Rain Forest in America did not portray any particular rain forest, but simply the idea of a rain forest. Asch knew, or at least intuited, that at the heart of any nature recording was a feeling as much as a place, an idea of nature as much as the physical reality of it. This is the paradox at the heart these natural sound reproductions: even if the content of the recordings are revealed to be inaccurate, the material can retain its "realness." On the one hand, the success of the Men of the Montaña exhibit can be seen as the ultimate triumph of sonic fakery, but on the other hand, it is an unheralded triumph in imaginative sound editing.

Craig Eley is a Ph.D. Candidate in American Studies at the University of Iowa, and was recently a Smithsonian Predoctoral Fellow in the Center for Folklife and Cultural Heritage. His dissertation project, “Making Silence Audible: Sound, Nature, Technology, 1890-1970” is a cultural history of nature records. 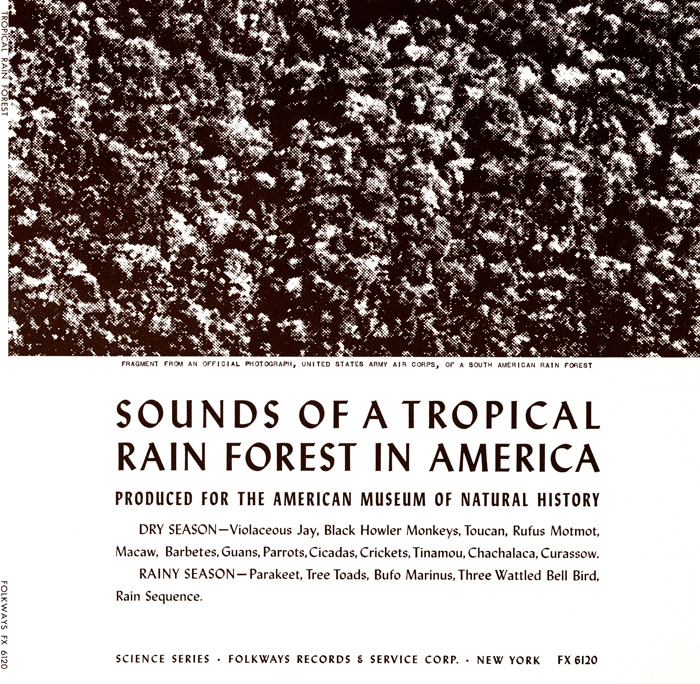