This fieldwork initiative began in 2010 to document what is likely the oldest living sacred musical tradition in Maryland and Delaware: the Singing and Praying Bands. The Singing and Praying Bands tradition was born out of secretive “brush arbor” devotional traditions of enslaved African-Americans in the Chesapeake Tidewater regions of Maryland and Delaware in the eighteenth and early nineteenth centuries. Combining lined-out Christian hymns with aspects of West African sacred music (ring-shouts), it has since become a central piece of African-American Methodist camp meetings in the region.

In time, this musical tradition was formalized within the Methodist churches of Maryland and Delaware, where each church’s uniform-clad “band”1 would play a key role in camp meetings and fundraising. This tradition was widespread and robust as recently as forty years ago, but has since become greatly diminished. Today, the fifty men and women who actively participate in the tradition form a single band that travels a circuit, visiting each host church, from spring until fall.

I came to know about the Singing and Praying bands through folklorist Jonathan David’s remarkable book, Together Let Us Sweetly Live: The Singing and Praying Bands,2 a rich historical and ethnographic portrait of the tradition and the community. As both an ethnomusicologist with an interest in American vernacular music, and as the director of Maryland Traditions,3 I wanted to learn more about the tradition and discuss ways that the Maryland State Arts Council might be a resource for a community at a crossroads. I reached out to Jonathan David, who has been researching the bands continuously since he encountered them while doing survey research for the Delmarva Folklife Festival in 1983. He connected me to Reverend Jerry Colbert, pastor of John Wesley United Methodist Church in Annapolis, Maryland, and one of the leaders of the Singing and Praying Bands.

In spring of 2011, Reverend Colbert and I met to discuss the state of the bands. The Reverend is a formidable and charismatic man who projects both strength and compassion. Our conversation was an introductory one, with Reverend Colbert telling me about the bands, while I described the work of Maryland Traditions. Together, we explored the ways in which we might forge an unlikely alliance between an historically marginalized community and a state government that, until the civil rights era, had fortified the marginalization of that community.

Our meeting bore fruit nearly instantaneously. Jonathan David nominated the bands for the Maryland Traditions Achievement in Living Traditions & Arts Award (ALTA, akin to a state heritage award), which they received. Reverend Colbert and I devised a plan to produce a radio feature about the bands for WYPR in Baltimore. For the feature, photographer Shane Carpenter and I documented the bands’ music service at Asbury Broadneck United Methodist Church, a church founded near Annapolis by enslaved African-Americans prior to 1851. We also documented the bands at St. Luke’s in Baltimore. Along with radio producer Aaron Henkin and folklorists Michelle Stefano and Jonathan David, we interviewed a number of band members. Additionally, photographer Edwin Remsberg documented the 153rd annual Camp Meeting at Mt. Zion United Methodist Church in Pasadena, Maryland, which has been a significant driver of the tradition.

Without knowing the deep history behind the tradition, the uninitiated would immediately recognize something distinctive about the bands: the songs are lined out and over ten minutes in length. Despite having only a few verses each, they build in intensity until finally collapsing upon themselves and segueing seamlessly into an equally intense ten-minute prayer from one of the individuals. At the time of the Asbury Broadneck recordings, testimonials featured virtuosic quotation of biblical verses blended with personal stories of hardship and triumph. The region had recently been struck by an earthquake and a hurricane, leading to a nearly imperceptible difference between personal and biblical references.

This is a gendered space, with the men standing with their backs to the altar, in front of a mourners’ bench, facing the women. The singers are wearing uniforms—the men matching the men, and the women matching the women. On the day of our visit, women led the prayers, and men led the hymns. A cycle of song and prayer repeated itself for nearly an hour, with the singers swaying, clapping, and stomping as they sang in polyphonic unison until the bands marched counter-clockwise around the mourners’ bench, in a manner rooted in West African tradition. As they marched, the women temporarily assumed the dominant position of facing the congregation before processing out of the church and continuing the song of praise outside.

This music-based worship marks the collision of multiple West African and European religious and musical traditions. It is the music that likely surrounded Harriet Tubman as a child on the Eastern Shore of Maryland; music she carried with her through the Maryland wilderness into Delaware, Philadelphia, and beyond into Canada. This music was known to have been coded to warn fellow travelers of approaching slave catchers. And yet this tradition has not passed into history with Tubman, or Frederick Douglass, or other significant historical figures who grew up in the Chesapeake tidewater. This is a living tradition.

A Singing and Praying Band service is extraordinary. It is intense and euphoric. It is music with a fixed and urgent purpose: to spread the Holy Spirit to every individual. This is a sound, style, and musical practice older than gospel, blues, and jazz. This is the bedrock of a strong and sturdy people in Maryland and Delaware who have persisted in the face of codified oppression, through slavery and Civil War, Jim Crow and civil rights, urbanization and industrialization, deindustrialization and race riots, depressions and recessions, drug wars and mass incarcerations, and onward through today.

Nonetheless, what was once a robust tradition that encompassed thousands has dwindled to between fifty and one hundred members. Many of the singers are elderly. At a meeting of band leaders, Maryland Traditions Program Coordinator Michelle Stefano discussed the promise and problematic nature of public intervention on a fairly insular tradition that the community thinks of as “ministry” and not “performance.” The leaders shared these conversations with their home communities and they voted to engage the public in hopes that public celebration of their tradition might inspire new members to join the bands.

The bands decided to take their tradition outside of the church for the first time in December 2011 at our ALTA Awards Ceremony in Silver Spring, Maryland. This involved significant dialogue between the bands, Maryland Traditions, and the National Council for the Traditional Arts, which produced the event, in order to clearly express to the audience that this was music ministry and not a “performance”—an important clarification for both spiritual and performative reasons. This pattern repeated itself at our Maryland Traditions Folklife Festival in June 2012, which coincided with the broadcast of our radio program.4

The day before the Festival, the Washington Post published a front-page feature on the bands.5 Following their stage appearance, I walked the festival grounds with Anthony Johnson, a band member from Delaware. Anthony is one of the younger members of the tradition, in his 40s, and he was accompanied by his teenage daughter. I asked him what he and the others thought of all the attention. He gestured to his daughter and said, “She’s never been interested in what I do, or in participating in this tradition. But when she saw us on the front page of the Post, she asked if she could join us today at the festival. That says a lot to me.”

The Singing and Praying Bands serve a critical role in African American Methodist churches in the region. The broader church community participates in the songs and prayers while they are in church, but few members take the step of actually joining the bands. While we have found their traditions to be remarkable for their musical quality and their cultural continuity, the bands have found our radio and video features to be useful tools to promote their cause within their home churches.

The bands’ work with Maryland Traditions led to an appearance at another festival in July, followed by an appearance at the American Folklife Center and the Kennedy Center in August, and still other appearances in 2013. All along, we—the bands and Maryland Traditions—have remained cautious of this experiment. Still, our recordings of their first several public appearances show the bands’ evolving identity as educators, adeptly coaching the audience on how to understand and interact with their tradition. And the bands, who were originally concerned about recruiting members at existing host churches, are now asking how to effectively minister to those who have become “of one Accord” at appearances outside of the church. It is, in their opinion, not actually a new realm for the bands. Rather, it marks a return to their revivalist roots.

Clifford R. Murphy, Ph.D., serves as the director of Maryland Traditions, the Folklife program of the Maryland State Arts Council.

1 Though called “bands” it is important to note that these groups functioned without musical accompaniment.

2 David, Jonathan. 2007. Together Let Us Sweetly Live: The Singing and Praying Bands. University of Illinois Press.

3 Maryland Traditions is the folklife program of the Maryland State Arts Council.

4 “Legacy of the Singing and Praying Bands.” The Signal, radio program of WYPR. June 8 & 9, 2012. http://programs.wypr.org/podcast/legacy-singing-and-praying-bands 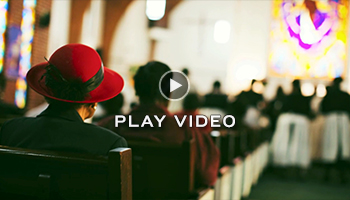 Holy, Holy, Somebody Touched Me