Recording historical songs often can require no more effort than searching the Internet for pre-existing sound files, and finding performers who can replicate performances already regarded as seminal. In circumstances when audio files aren’t available, sheet music indicating melody, tempo, and mood can usually be located. But when the body of songs to be recorded is more than a century old and neither sound files nor sheet music exist, the process then becomes more complex, and weighed judgment must be used to ensure that the integrity of the material is not placed in jeopardy merely to expedite the project.

That was largely the challenge two years ago when Smithsonian Folkways asked me to go forward with Civil War Naval Songs (SFW album 40189), an all-new album honoring America’s veterans. The timing was compelling. April 12, 2011 would mark the 150th anniversary of the bombardment of Fort Sumter, the opening volleys of a conflict that took the lives of 620,000 Americans, some two percent of the nation’s population. The resultant recording—13 songs from Union, Confederate, and British sources—is both historical in view, for the lyrics are all period pieces, and historic in nature, for, of the many albums of Civil War material that have been made, this is the first and only one devoted entirely to the war on water. But, because maritime songs from the Civil War are far less numerous than military songs and good nautical lyrics with memorable tunes are scarcer than gold nuggets in the panned-out creeks of the Sierras, song research and selection were of vital importance.

The majority of maritime songs from the Civil War period are about a handful of topics that captivated public attention during the four-year-long conflict: massive naval assaults on strategic points; commerce raiders built to damage the economy of the mercantile-industrial North; ships that maintained or defied the Federal blockade of Southern harbors; close-quarters duels meted out by heavily armed vessels; and the separation
of loved ones.

At the time of the Civil War, the art of song-making in the United States had reached new heights. Folk poets in rural locations around the nation were craftily fitting the American experience into the templates their forefathers had brought with them from the British Isles. Sheet music was enjoying explosive growth in middle-class homes. First published in 1851, “Old Folks at Home,” written by Stephen Foster, America’s first professional composer of popular songs, sold 150,000 copies, 30 times more than any previous sheet music item. Near City Hall in New York City and in other population centers, ballad sheet printers were turning out just-created topical songs to be sold on bustling street corners and sent by mail to rural hamlets that typically received news—even alarming news—at a slower pace. Songs reflecting all three of these paradigms are included in Civil War Naval Songs. Four are sung by Jeff Davis, a graduate of Duke University and a regular during his college days at the Galax, Virginia, fiddler’s conventions. They all come from Confederate sources. Four more are sung by David Coffin, a descendent of Tristram Coffin who settled on Nantucket Island in 1642, and were composed by Northerners. Yet another four, associated with immigrants who were flooding into both the North and South during the mid-19th century, are led by me, together with a ballad printed in Scotland that views America’s Civil War from the perspective of the blockade runners who risked all to bring precious Southern cotton to the starving mill towns of
northern England.

As album producer, I was absolutely delighted that David and Jeff agreed to join me in the project because, in addition to being intimately familiar with the musical genre and the mindset of the period, both are great musicians. Jeff’s arrangement of “The Fight of the Hatteras and Alabama” pairs a set of words written by Frank Townsend of the Alabama with a tune variant of “Brennan on the Moor.” It was used because the Liverpool-built Confederate commerce raider carried an Irish fiddler on board. This song is just one of many firsthand reports on the album. Another is “The Florida’s Cruise,” attributed to a foretopman of the vessel, which Jeff set to the melody of “Solicitude” from the 1854 edition of William Walker’s The Southern Harmony and Musical Companion.

The nautical lyrics of the Civil War period are not just a collection of jingoistic boasts. “The Sailor’s Grave” effectively communicates that war is not a “win-win” situation and that, just as some men triumph, others suffer mortally. Because the song was published on a broadside that gave no indication of the melody, singer David Coffin composed an elegant and memorable tune that makes this song one of the high points of the recording. By contrast, the tour-de-force “The Last of the Alabama,” a narrative of the sinking of the most destructive ship in the Confederate fleet, proclaims just vengeance in bold tones.

Two of the album’s songs were probably employed at recruiting drives during the conflict. “A Yankee Man-of-War,” sung unaccompanied by a vocal trio consisting of guest vocalists Deirdre Murtha and Bonnie Milner of The Johnson Girls and myself, is an American adaptation of a British “broken token” ballad from the First Opium War (1839–1842). Well distributed in tradition, it was also known by New Bedford whalers, and landsmen from rural Maine to Newfoundland. “The Monitor and Merrimac,” an in-your-face insult to Confederate States’ President Jefferson Davis, was performed on stage in the North by comic singers, the royalty of Civil War–era variety music halls, with an orchestra consisting of period band instruments including the newly invented trombone. Joining me are Kate Bowerman of the Washington Square Harp & Shamrock Orchestra (clarinet, piccolo), former Chieftains sideman Gabriel Donohue (piano), and jazzwoman Melissa Gardiner (slide trombone), plus a chorus consisting of Deirdre and Bonnie, and Don Stiffe, who has since become “world famous” in his homeland after winning on The All Ireland Talent Show program on RTÉ television.

From the perspective of historical accuracy, the last issue to be reckoned with was musical instrumentation. Sailors lived in tightly cramped quarters. Portability, durability, and “stowability” were important attributes on voyages, largely ruling out the bulky and relatively fragile guitar. While there are documentary photographs showing officers holding guitars, enlisted men strumming the six-stringed instrument are a rare sight. The guitar actually entered the United States in two ways: in the East, directly from Europe as a parlor instrument (hence its greater currency with the presumably more refined officer corps); and as a folk instrument via Mexico with the inference that it was popular in the Southwest long before it was known in the Mid-Atlantic. Banjos, fiddles, and bones (all pictured on the front cover of Civil War Naval Songs) were key instruments in popular minstrel shows and were highly favored by sailors on sea duty, as were free reed instruments such as the accordion. All these instruments plus the piano were to be found on shore where sailors sought relief from the harsh conditions of life at sea, and the wild panic and wrenching heartbreak of battle. 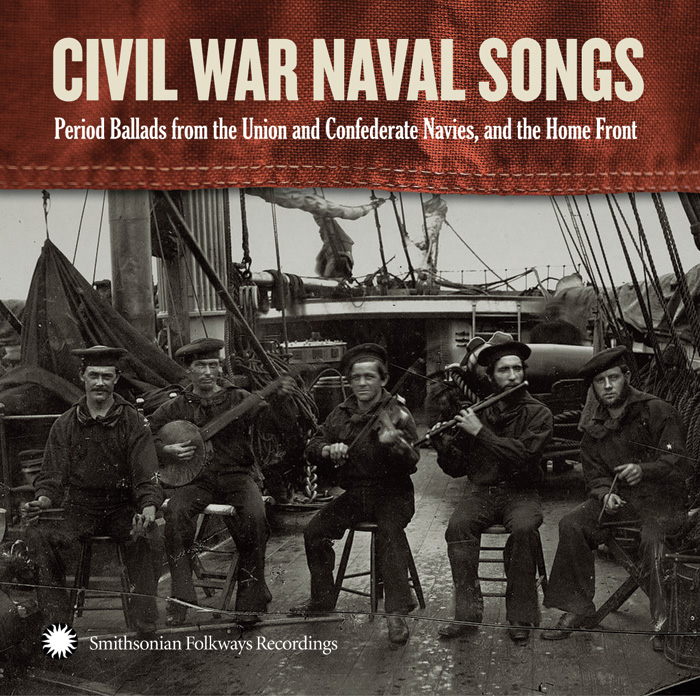