The International Library of African Music (ILAM) at Rhodes University in Grahamstown, South Africa, is widely considered to be the oldest and largest repository of African music field recordings in the world. Founded in 1954 by Hugh Tracey as a research institution and archive, it preserves thousands of historical recordings going back to 1929 and continues to support contemporary fieldwork. Among its most renowned recordings is Hugh Tracey’s seminal Sound of Africa series—selections of which are available from Smithsonian Folkways Recordings—which remains among the most influential fieldwork in the field of African ethnomusicology.

MH: What are the main collections at the International Library of African Music (ILAM)?

DT: ILAM’s major holding is the Hugh Tracey collection, but other holdings include the Andrew Tracey collection and Dave Dargie collection... We’ve recently processed Jaco Kruger’s field collection, which includes extensive research on Venda music, from the northern part of South Africa. And [we have] another collection from a sociologist here at Rhodes University [Michael Drewett] who did a lot of research on the censorship of popular music during apartheid. His field recordings are being processed now and digitized. It’s an ongoing thing. We receive deposits from researchers doing work with African music and one of our aims is to build the archive.

MH: Can you provide our readers with a brief history of Hugh Tracey, founder of the International Library of African Music (ILAM)?

DT: The International Library of African Music (ILAM) was founded by Hugh Tracey in 1954 after he had been doing fieldwork to document and research music in southern Africa—first in Southern Rhodesia, which is now Zimbabwe, and then in South Africa and Mozambique. This research of his started in 1921, when he had come to Southern Rhodesia from England at the age of eighteen to help his brother with his tobacco plantation... Now that took Hugh Tracey into the field with Karanga farmworkers, planting tobacco seedlings, and gave him an opportunity to hear them telling their folktales and singing their songs. He was fascinated with the music and its value in social life. It soon became his passion to document it. His made the first recordings of Karanga music ever by transporting musicians to be recorded in South Africa in 1928 and 1929.

...He got a Carnegie foundation grant in 1931 that gave him funding to conduct survey research on the music of Southern Rhodesia for two years, from 1932 to 1933. During this time he discovered Chopi xylophone orchestras in Mozambique and he basically self-funded all of his Chopi research.. He published a book on Chopi music that explained the xylophone—the timbila xylophone orchestras—which was quite a seminal book published in 1948, called Chopi Musicians and Their Music... And then by 1952, he was in Johannesburg and started recording mine dances at the Sunday afternoon performances at the mining compounds and published Dances of the Witwatersrand Gold Mines with professional photographs of the various dance troupes throughout the book... When he established ILAM in 1954, he began publishing African Music, which was the first journal to focus exclusively on research on the music of Africa. ...He was very productive, an incredibly productive person.

MH: What can you tell us about the parts of ILAM’s collection that are represented here at Smithsonian Folkways?

DT: Between 1958 and 1962, [Hugh Tracey] produced a series of two-hundred and ten LPs from his field recordings called the Sound of Africa series. With a grant from the Ford Foundation, that series went into sixty universities throughout the world. Now this was exactly when ethnomusicology was getting started as a discipline. By 1958, he started releasing the recordings, and by 1962, the whole series was finished. So if you talk to ethnomusicologists who chose African music as their research topic—people like Christopher Waterman who did research in Nigeria—they will tell you about how their first exposure to African music can be traced to listening to Hugh Tracey’s Sound of Africa LP series. So this was a huge contribution on his part. It got African music out into the rest of the world—not from a commercial recording company—but from a research institute and archive, which is what ILAM was then and is now.

Those are the recordings that you have at the Smithsonian... [founding director of Smithsonian Folkways Recordings] Tony Seeger came to ILAM with his proposal about Smithsonian Global Sound and Andrew Tracey [Hugh Tracey’s son and retired director of ILAM] entered into a contract with him to deliver a thousand tracks for the website. And those tracks were taken from the Sound of Africa series... The series is two hundred and ten LPs, and then Andrew Tracey added eight more later from his own field research, so there are actually two hundred and eighteen LPs in the series.

MH: I know that this is may be a difficult question, but what are some of the highlights in the Sound of Africa series?

DT: Well, back when they first launched the series, they had a feature on Jean Bosco Mwenda. So those seven recordings of him playing Congolese guitar are there. That might be of interest to a lot of people. There are also recordings of mbira from Zimbabwe, of course, and the Chopi xylophone music, which is a sound unto itself—there is nothing else that sounds like a Chopi xylophone orchestra.

Another recording that people are very interested in is from Kenya, called ”Chemirocha.” Hugh Tracey actually made several recordings of people singing this song called ”Chemirocha” in 1952—it was either 1950 or 1952. And the story is that the commercial recordings of Jimmy Rogers made it to Kenya and people loved this country western music and made up their own song and called it ”Chemirocha.” ...What they were singing is ”Jimmy Rogers, Jimmy Rogers,” but it was ”Chemirocha, Chemirocha”—that’s the way they heard it. So there’s quite a story behind those recordings. There was a myth that Jimmy Rogers was coming to visit or that he had come to visit, that kind of thing—although I’m sure that he never did come to the Rift Valley in Kenya, but that’s where it happened... that’s where Hugh Tracey discovered people singing the song—which was a popular song!

He also went to Zanzibar and recorded brass bands and taarab music. People like to hear that sort of thing. It’s endless, you know. I think that maybe it depends on what people are drawn to, instrumentally, and maybe what region of Africa they are interested in. There is a vocal music from South Africa. I think the Princess Magogo recordings are there—that’s Zulu bow music, with voices, with her voice. She was one of the last musicians that Hugh Tracey recorded, in 1963, I believe. She was also included in ILAM’s Music of Africa series... She was from a royal Zulu family and had a gift for music, and played the bow and sang beautifully. She was well-known in her lifetime.

MH: What are some recent activities at ILAM that you’ve been excited about?

DT: These two education textbooks we’ve published in the last couple of years that utilize Hugh Tracey’s field recordings and images from our photo collection to illustrate the lessons. One is called Understanding African Music and is pitched at the high school level because South African students can now choose to major in African music… if you’re a music major, you can choose African music as one of your subjects. Well, unfortunately, there are no materials to teach African music, so we designed this book for that purpose and also as a way to get our recordings out of the archive and into the schools....And it comes with a CD/DVD that has 96 audio tracks and several video clips to illustrate the lessons. But, the content is also of interest to a general audience.

The second book is for seventh to ninth grade students—twelve to fifteen year-old kids, who are required by the South African curriculum to learn Western music theory. It covers everything from major scales to minor scales, tonic sol-fa and regular Western notation, but the lessons are illustrated with African music, with recordings of African music from our Hugh Tracey collection, primarily. There’s a unit on Xhosa music, and another unit on xylophone music and panpipes—there are some lessons that are illustrated with little video clips. In the upper level book, the author includes amadinda xylophone music, and [instructions for] how to play it are on the video clip. And in the lower—in the younger grade level book—it’s pan pipes and Xhosa. A fairly well-known South African ethnomusicologist named Dave Dargie did extensive work on Zulu and Xhosa music, so some of his recordings [archived at ILAM] are also included. And of course, the books both come with a media disc with all these recordings on it, so teachers have our ILAM recordings to use in teaching the lessons.

MH: Looking forward, what’s on the horizon for ILAM?

DT: I’m about to launch this repatriation project. It’s a pilot project in giving digital copies of Hugh Tracey recordings back to the communities where he recorded them—select locations in Tanzania, Zanzibar, and Kenya. ...We’re going to go to the villages and try to give the recordings back to descendants of the artists who Hugh Tracey recorded, to community centers and teachers, wherever possible, and to musicians.

We can so easily copy everything and give it in digital format, or burn a CD. The whole point for me is to promote revitalization of the traditional music and awareness of African heritage. Hugh Tracey actually wanted to do this. The last big project he tried to launch in his career was what he called the “African music codification and textbook project.” He wanted to produce textbooks for the schools of Africa because he knew that children were learning nothing but Western music in school. But he couldn’t get funding from international organizations because of the sanctions—it was the height of apartheid, it was the 1960s. Our decision to publish the two music education textbooks was out of a desire to begin to fulfill Hugh Tracey’s vision to get African music into the schools.

To give copies of the recordings back to the communities from which they came, to me, is like the ultimate act of archival ethics in this day and age, because everything is now digitized, and all so accessible. ...We’re doing it on a shoestring, but it’s going to happen. We’re going to get started and see how it works, and then learn from that. And, hopefully, do more next year. And maybe with the evidence from this pilot project, we can get a grant to do it more extensively.

MH: This has been really fascinating. Diane, thank you so much for taking the time to speak with me.

Diane Thram is the director of the International Library of African Music (ILAM), located on the Rhodes University campus in Grahamstown, South Africa, and editor of ILAM’s accredited journal African Music 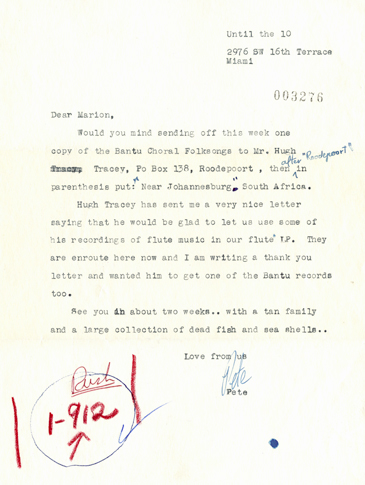 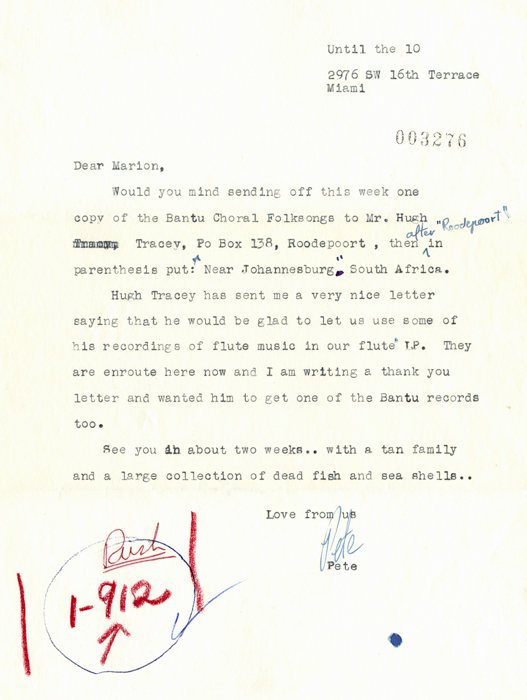 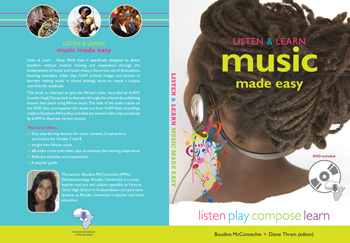 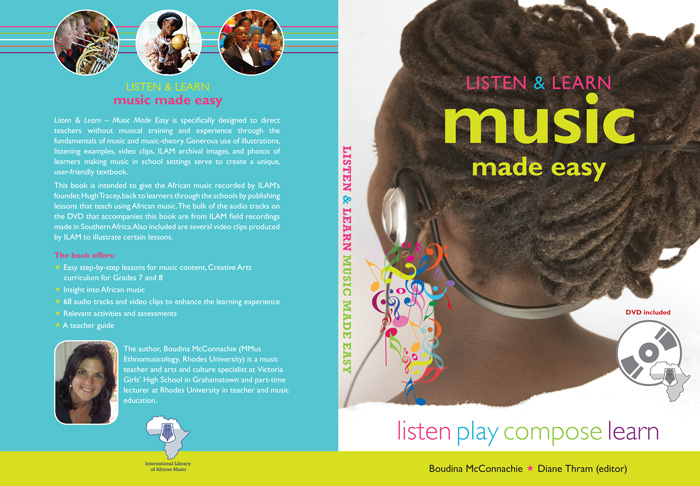 Cover image for the textbook Listen & Learn: Music Made Easy. Courtesy of the International Library of African Music.
Download (PDF)

Cover image for the textbook Listen & Learn: Music Made Easy. Courtesy of the International Library of African Music. Download (PDF) 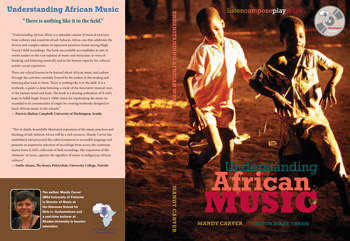 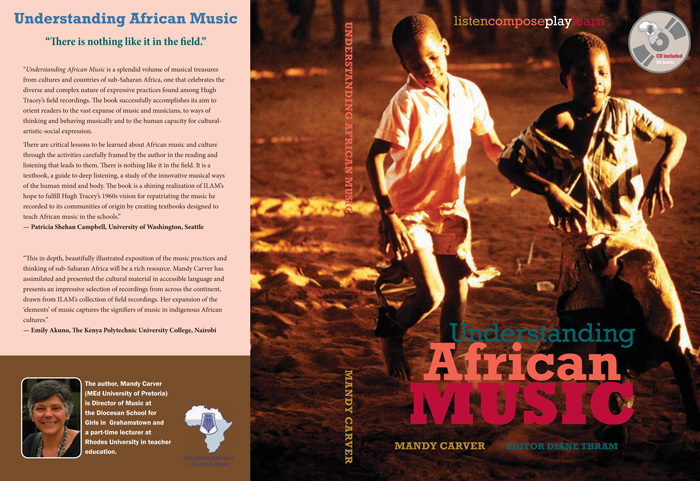