For a third consecutive summer, Smithsonian Folkways joined hands with the University of Washington (“the UW”) to offer a 40-hour intensive training in World Music Pedagogy to K–12 (and a few university-level) teachers. For eight hours across five days at the end of June, teachers met to listen, discuss, and dissect Smithsonian Folkways recordings for their sonic substance, cultural meaning, and pedagogical relevance. Attending the course were teachers responsible for teaching music (and integrating music into language arts and social studies for children) in elementary schools, and teachers working with middle and high school choristers, instrumentalists, and other musically interested adolescents. Also enrolled in the course were several community music teachers, a Spanish-language teacher, a teacher of high school history and current events, a church choir director, and several college-level faculty charged with teaching music broadly and in multicultural and global dimensions. Twenty-two teachers were certified in World Music Pedagogy at Washington’s program, and another five were certified through the University of Idaho’s program; there are now 101 teachers in possession of a certificate of accomplishment from Smithsonian Folkways for their knowledge and skills in teaching the world’s musical cultures.

In addition to several Seattle-area teachers, others traveled to Seattle from Boston, Philadelphia, New York, Maryland, Connecticut, California, Pennsylvania, and Idaho; two more came from Japan and Spain to study at the UW and be trained and certified for teaching more of the world’s musical cultures (as well as to teach culture through music). These teachers listened, sang, played, danced, and created new versions of musical standards from many of the world’s cultures. They sampled recordings of an array of cultures from the online archive of Smithsonian Folkways Recordings, including the sophisticated high-culture music and folk traditions of Bulgaria, Mexico, North India, Puerto Rico, South Korea, Tanzania, Trinidad, Turkey, and Uganda, in addition to selections from the treasury of children’s music first established by Moses Asch and featuring Ella Jenkins, Elizabeth Mitchell, and Sarah Lee Guthrie. They brought their expert pedagogical knowledge, honed through many years of classroom experience, in thinking through curricular content and instructional processes that are resonant with both the cultures of the music they were studying as well as the students they are teaching.

Alongside a plethora of Smithsonian Folkways recordings and video-recordings that were woven through the week-long workshop, participants were treated to a faculty of seasoned teachers, musicians, and scholars: Marisol Berrios-Miranda, Shannon Dudley, León Garcia, Kedmon Mapana, Peter Park, Christopher Roberts, Amanda Soto, and Patricia Shehan Campbell. The spirited music they made featured a variety of encounters, as they sang and danced a rucenitsa from Bulgaria; sang-moved to-played choral music of the Wagogo of Tanzania; danced to cumbia-styled conjunto music of South Texas; played rhythms on drums and gongs in a South Korean pung mu’l (samulnori) ensemble; performed (and moved to) polyrhythms of Trinidad and Puerto Rico on bottles as well as claves, congas, cowbells, and güiros; stepped the fundamental “café-con-pan” footwork rhythm for Mexican son jarocho music; engaged in a half-century of American children’s singing games; sang and danced a graceful Turkish folk melody in five beats; kept tala for Hindustani classical music selections (and played Tamil-Indian melodies on classroom xylophones); and played “El Cascabel” in a makeshift mariachi consisting of more than a dozen guitars, a flute, a violin, a trumpet, a guitarrón, two piano parts, and a sousaphone. In their design of Music Culture Curricular Units, teachers created engagements for their students in a musical culture of their choice, and made good use of the liner notes of Smithsonian Folkways recordings as well; their curricular units are available under Tools for Teaching.

Plans are underway now for the fourth annual certification workshop at the University of Washington in June 2012. Stay tuned, as there will be multiple workshops next year, quite possibly on a university campus near you. These workshops are further evidence of the commitment by Smithsonian Folkways to the public sector, recording and preserving the musical expressions of many cultures in order to share them with others, including teachers who so capably pass the understandings and skills on to their children and youth. 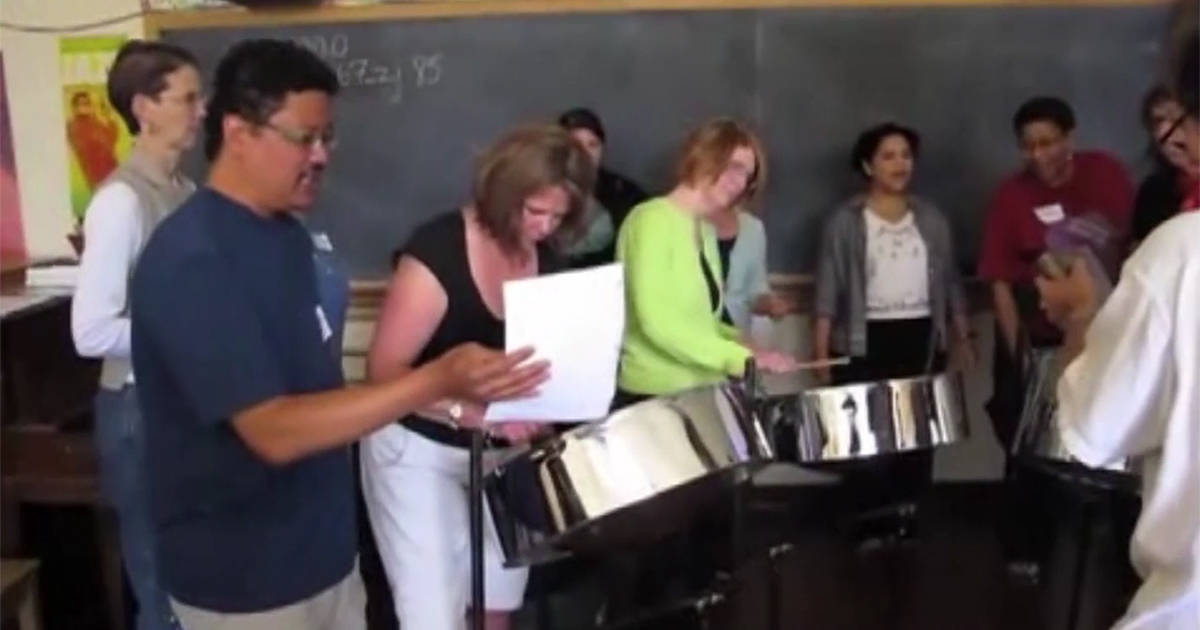