It’s February 12th, 2006, at Mustafa Kemal Hall at Istanbul Technical University. A voice is heard through the speakers that echoes across the whole hall. “I am sorry that I cannot be with you tonight,” the voice says. “If I knew that I would not be able to smoke on a plane, I would have never moved to New York.” A loud laughter is heard in the hall. After approximately 10 minutes of lecturing on smoking, he concludes his speech and thanks the university for his lifetime achievement award. That was İlhan Mimaroğlu. Always daring, always out-spoken.

How do I describe İlhan Mimaroğlu? He was an avant-garde composer, who famously collaborated with Freddie Hubbard on the album “Sing Me a Song of Songmy”. He worked as a producer at Atlantic Records, where he oversaw the production of numerous jazz albums, including those by Ornette Coleman, John Coltrane, and Charles Mingus. He was a writer who published books about electronic music, utopia, and jazz in the Turkish language. He was a photographer, who documented graffiti from all around New York City during his retirement. He was also a video artist who filmed interviews with contemporary music composers of his generation.

Mimaroğlu released three electronic music pieces on two albums for Folkways Records. The pieces were “Tract”, “To Kill a Sunrise”, and “La Ruche”. Two of these pieces (“Tract” and “To Kill a Sunrise”) are outstanding examples of electronic music, as well as political statements of the highest order. Dedicated to Nâzım Hikmet, who Mimaroğlu regarded as “the greatest poet of the revolutionary struggles,” Tract’s political approach is as relevant today as it was forty-two years ago. The piece was inspired by intense repression, counterrevolutionary terrorism, and the murder of several revolutionary patriots by government forces in Turkey during the early nineteen-seventies. Musically, it is an eclectic, sophisticated piece of music. Short phrases of popular music, played by the band Topsy Turvy Moon, are blended with atonal melodies. The text is based on quotations by Alexander Bakunin, Bertolt Brecht, Jean-Baptiste Clement, Mahir Cayan, Nâzım Hikmet, Peter Kropotkin, Mao Tse-tung, Karl Marx, and Eugene Pottier, it is written by Mimaroğlu and sung by Tuly Sand. The contrast between the beautiful melodies sung by Sand and the harsh, loud electronic musical phrases is outstanding. 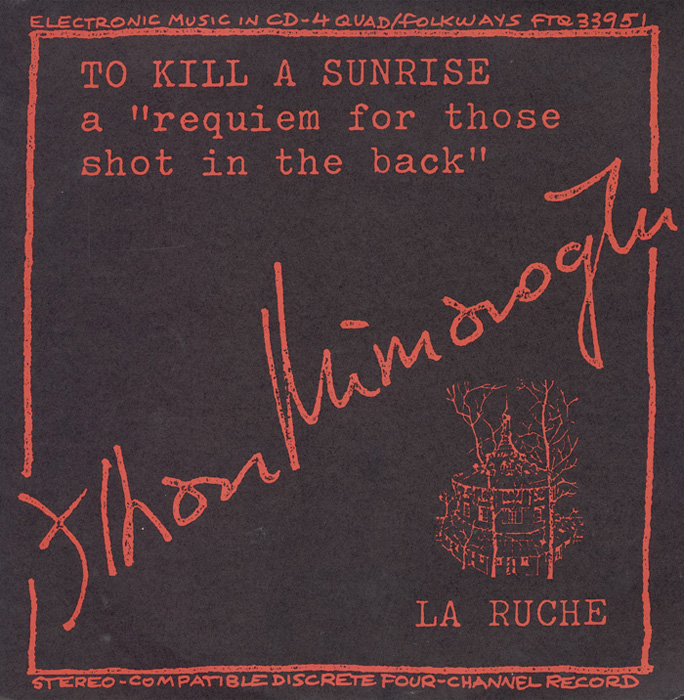 “To Kill a Sunrise” is described as a song of mourning for those murdered by the servants of the ruling class. The words are derived from texts by Mimaroğlu, Che Guevara, and Guatemalan guerrilla poet Marco Antonio Flores. It is read aloud by Mimaroğlu, Chris Washington, and Geoffrey Gursoy. The vocal melody is sung by Mary Ann Hoxworth. This composition may be Mimaroğlu’s most texture-dense piece. It sounds like a nightmare that gets increasingly horrific from start to finish. The cries—perhaps representing the cries the victims—are blended with electronic timbres. It sounds like one of the most intense, horrific sonic experiences one can go through. 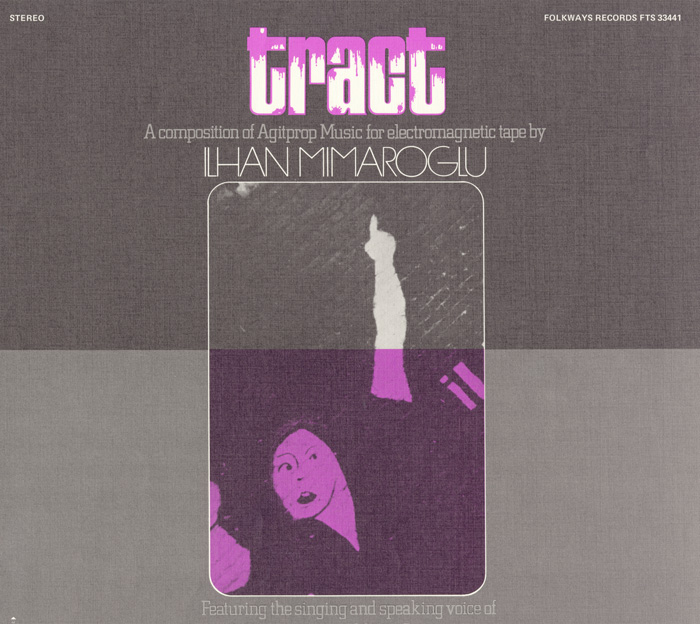 Mimaroğlu was never a fan of composing music on a computer. For him, the heart of an electronic music studio was the tape recorder. In his early career, he studied and worked at the Columbia-Princeton Electronic Music Center (CPEMC), which had all of the cutting edge equipment of the time. Ampex tape recorders were at the center of the studio. Today, a composer working on a computer can use any kind of reverberation with just the click of a button. Back then, whole rooms were equipped with EMT reverberation plates. Bode ring modulators and frequency shifters, Moog voltage-controlled amplifiers, envelope generators, envelope followers, analog filters, and Buchla modular synthesizers were also used at CPEMC, as well as mixers designed by Peter Mauzey.

In those days, composing electronic music involved much more physicality. You could literally touch the sound on a piece of tape, cut it, splice it, loop it, reverse it, and much more. Manipulating the tape with bare hands was an organic, tactile process that required the composer to use recording tape, razor blades, leader, timing, adhesive, editing blocks, and greaser pencils. The manual process of splicing and editing was time consuming and the results were irreversible. Today, composers can employ unlimited “undos” while working on a computer for a new piece of music. It is hard to imagine the difficulties that Mimaroğlu went through while composing his sophisticated electronic music compositions with analog tape. Each and every detail would have been thoroughly thought-out and executed with precision.

For Mimaroğlu, experimentation was a continuation of the conceptualization process. If concepts and political content were at the heart of his compositions, tape manipulation techniques were there to serve the idea, not the other way around. This is very evident on the albums released by Folkways Records in 1975 and 1976.

Unfortunately, horrific world events have not subsided since Mimaroğlu's time. As of 2017, Turkey is again in a political turmoil. Hundreds of journalists are imprisoned. Thousands of academics and tens of thousands of civil servants have been fired in recent months, with many having their passports revoked. Any idea, protest, text, or social media post against the ruling party risks severe punishment. Mimaroğlu’s music, with its daring experimentation, encourages us to question the status quo—the political, economic, ecological turmoil in the world—and dream about new ways of living. Just like he envisioned in his book Yokistan Tasarisi, utopia is always possible.

Erdem Helvacıoğlu is a contemporary music composer who is based in Istanbul and New York City. His music has been featured on radio stations such as BBC, WNYC, and Radio France, as well as in numerous international festivals such as The San Francisco Tape Music Festival and Sonorities Festival of Contemporary Music. He is the co-compiler of Anthology of Turkish Experimental Music 1961-2014. More at http://www.erdemhelvacioglu.com/. 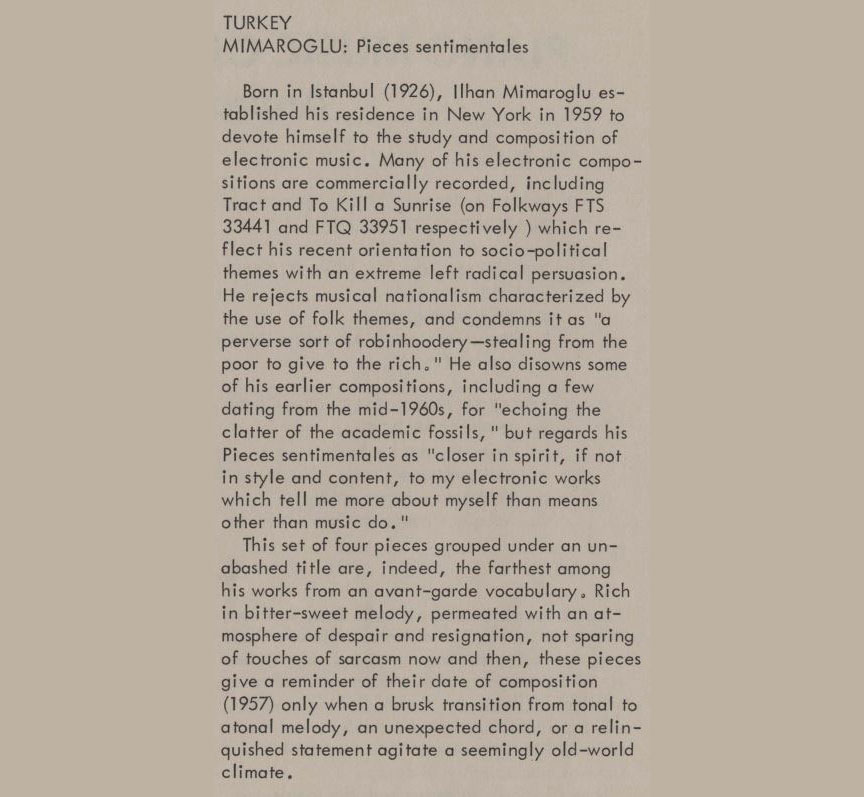 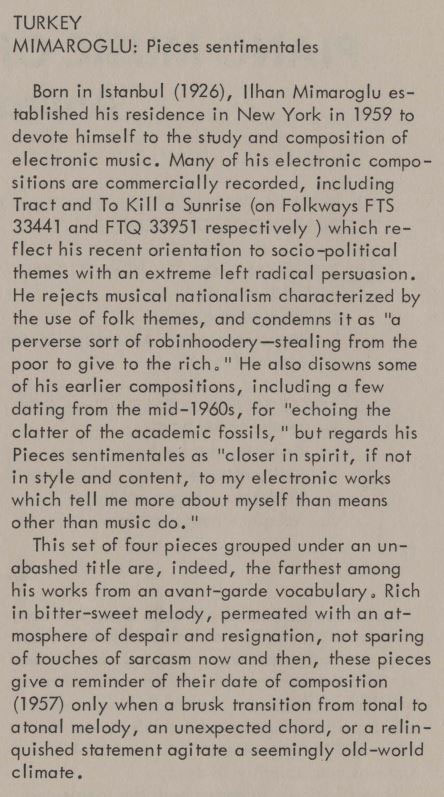 Ilhan Mimaroglu’s bio in the liner notes of Amiran Rigai’s compilation Piano Music of the Middle East (1978) which features four of Mimaroglu’s piano compositions from 1957.
Gallery 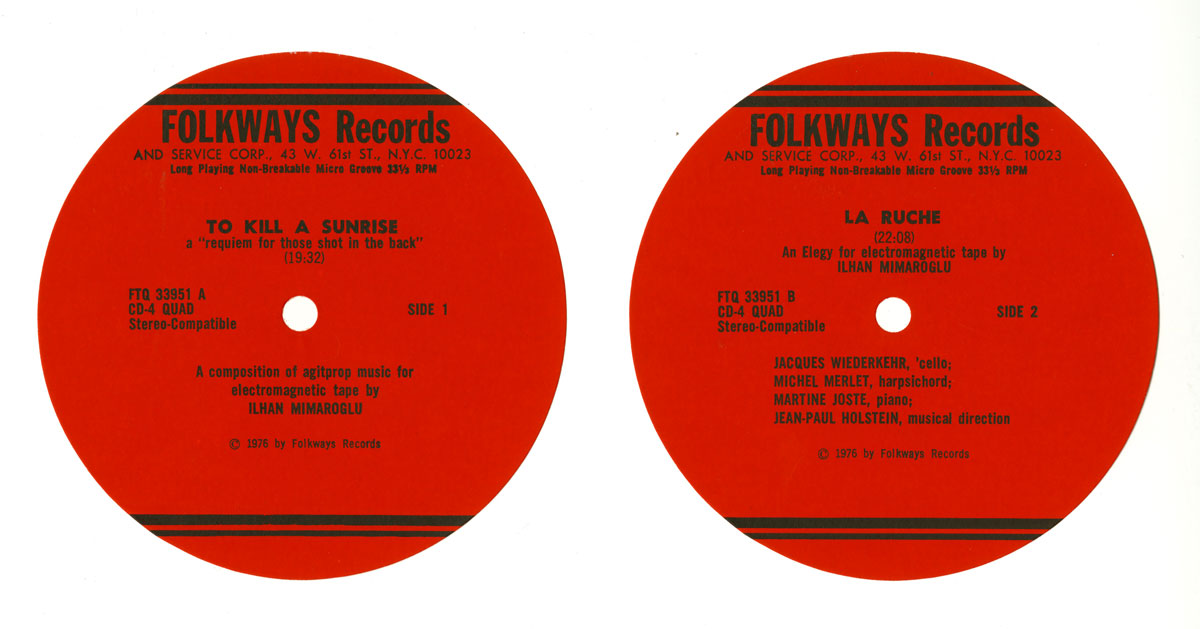 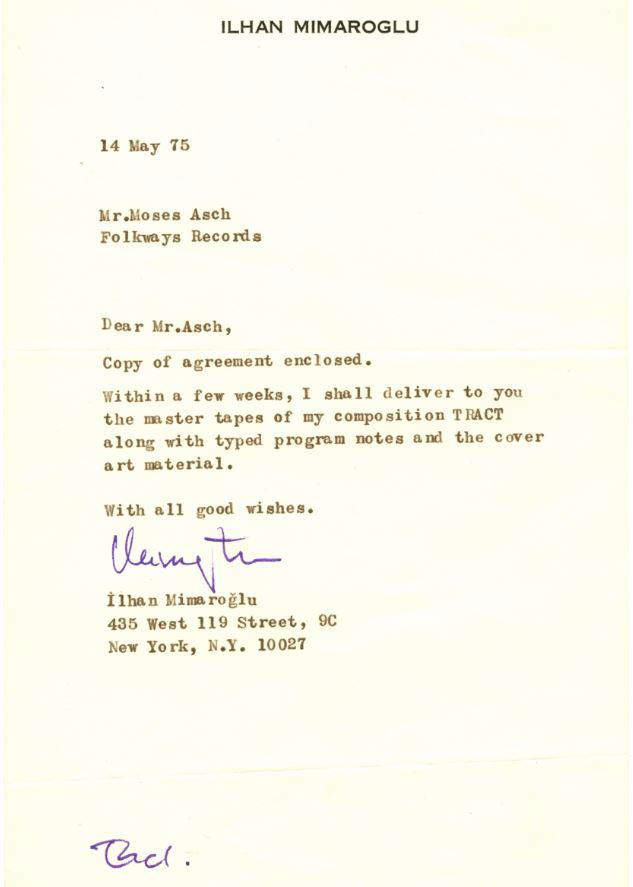 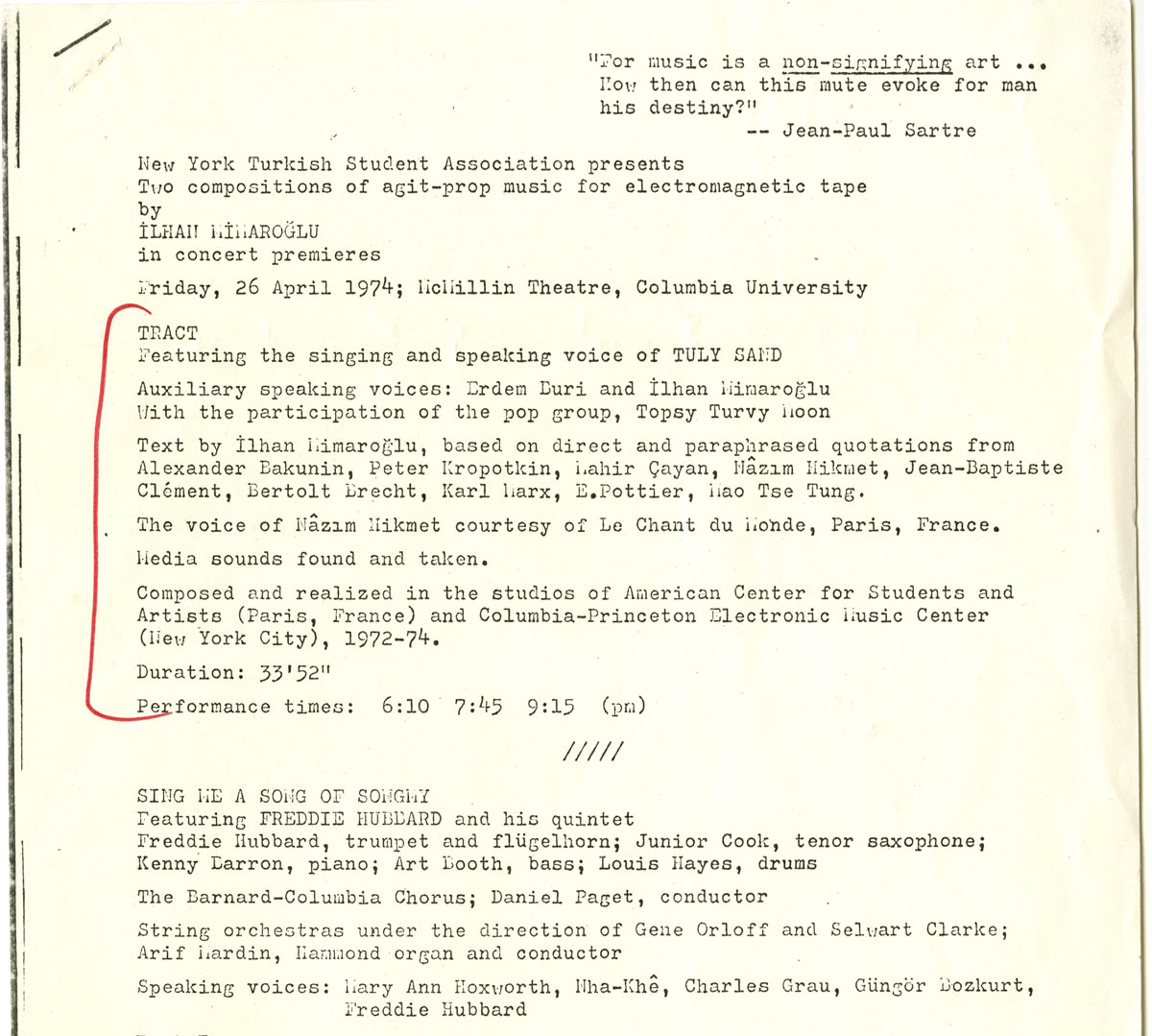