Harp and vocal music of Burma

The Burmese arched harp, a little known treasure among Asian musical instruments, figures prominently in Burma's classical music tradition. That tradition, developed over several centuries in Burma's royal courts, exhibits the restraint, subtlety, and elegance of many aristocratic traditions - but in an idiom uniqely Burmese.

What follows are descriptions and sound clips of various tunings used in Burmese classical music. The tunings of the saùn gau' are notated with G as the highest note. In practice the entire tuning may be higher or lower, usually within a whole-step either way. The exact placement (temperament) of certain pitches may vary between players, between pieces with the same player, and between upper and lower Burma. Furthermore, the tunings as listed are not the only way to tune in that scale/mode. Sometimes the highest note in the tuning may be omitted and an additional low note added, effectively shifting the range of tuning.

The distance between two chromatic notes (in Western tuning) can be divided into 100 cents. e.g. C 50 cents sharp would be equidistant between C and C#. Precise measurements can be made of the placement of certain pitches with reference to these units.

In each of the following tracks, U Myint Maung plays a scale in the tuning indicated. The examples are played from high to low, but described from low to high.

Hnyìnloùn is often described as the above scale with slightly flattened E and B notes. U Myint Maung and other master harp players tune these two notes so flat that they may be thought of as a sharpened E♭ and B♭. However, when the same tunes are played on a fixed-pitch instrument (Burmese piano, mandolin, guitar) the notes E and B will be selected. U Myint Maung tunes the E approximately 56 cents flat, and the B about 62 cents flat. In addition the note A is added by using the left hand thumb. The tonic is usually C, though sections of a piece—even an intro—maybe in F.

U Myint Maung tunes the E♭ approximately 41 cents high, the B♭ 25 cents high. The A is 50 cents lower. The tonic is mainly F.

In myìn zäìn tuning the notes approximate Western pitches, and the tonic is usually E♭. The A note is added, and sometimes A♭ is used—even in the same piece—as in Hseze yaun, CD track #8.

The notes of apoù tuning are similar to Western pitches. The tuning uses a pentatonic (five-note) scale through the whole range. The tonic is usually C. The extra added notes may be B or Bb, and F or F#. In Hpan htwei la (CD track #5) there is a slight adjustment to the tuning. The 5th note from the lowest pitch is tuned to F instead of E. The tonic is mainly C, although many sections are also in F. The additional notes F and B are used in the introductory section, and then in the body of the piece F and Bb are often used. In the bonus track below, B and F# are often used, and sometimes F.

The notes of hnabau' tuning approximate Western tuning. B and E are added, and the tonic is F.

In pyidobyan tuning the B is approximately 28 cents flat, and the tonic is G. The additional notes B and F are added in the higher octave.

Palè is tuned to a pentatonic scale similar to Western pitches. The notes A and E are added, and the tonic is usually B♭. 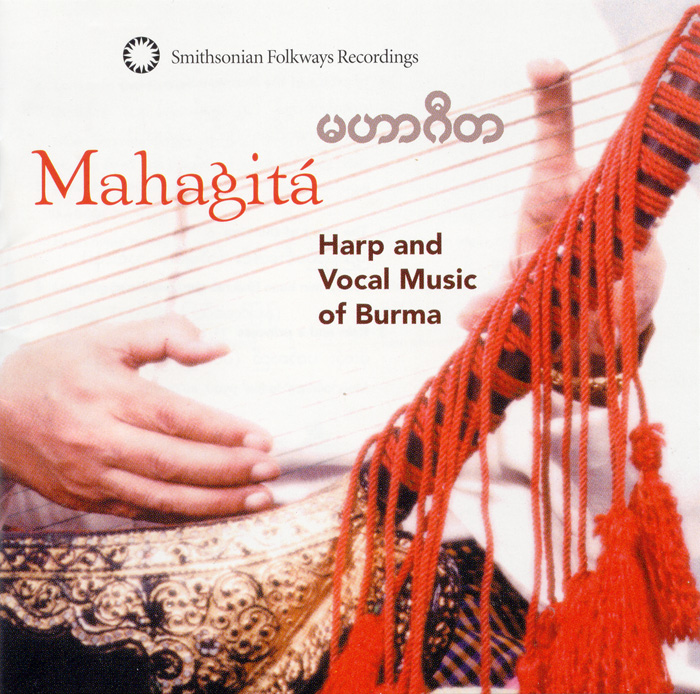 Mahagitá: Harp and Vocal Music of Burma
Inle Myint Maung and Yi Yi Thant
In praise of the Burmese harp
Rain and a princess
A hunstman enchanted
The twelve royal gates
The king's potency
Waiting