Music of !Kung Bushmen of the Kalahari Desert, Africa 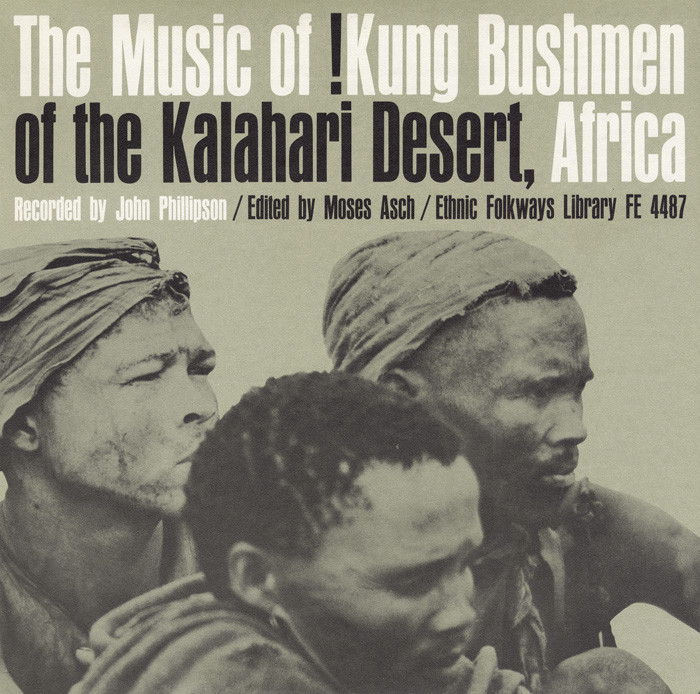 The !Kung (the ! is a click consonant made by clicking the tongue against the back of the roof of the mouth while making an O shape with the lips) are a San tribe that traditionally lived as nomadic hunter-gatherers in the Kalahari Desert in southern Africa. This album is a selection of field recordings made by John Phillipson of !Kung music for many different occasions. Included are solo instrumentals on a single-stringed bamboo fiddle and a type of thumb piano called a sitengena, along with a capella songs with clapping. Liner notes contain information on the !Kung and a brief account of Phillipson’s interactions with those who were recorded in this album.

*Content Advisory: The term “bushmen” in this album’s title and descriptive notes has negative connotations, such as the stereotyping of people deemed “primitive.” This stereotypical name for the San, the Indigenous people of Southern Africa, suggested their inferiority in relationship to the colonizers. The !Kung people are a distinct nation within an ethnolinguistic group often referred to as San, or Khoesan, whose ancestry can be traced to the first modern humans in Africa. Smithsonian Folkways does not condone the inherent racism of the above terms but has chosen to leave the album as published in its original state to serve as a historical document. However, we encourage the listener to learn more about how the !Kung prefer to be represented. Click here to learn more.
- Anna Kate Cannon, 2021–22 Dumbarton Oaks Fellow at SFR, Samantha Parton, SFR 2022 Intern, and Dr. Lee Watkins, Director of the International Library of African Music, contributed to this statement.
For our policy on controversial recordings, please see our Frequently Asked Questions page.