Songs of the Water Ways

The sea and other water ways such as large lakes, long rivers, and wide bays, have inspired songs for centuries. Maritime music plays a major role in life on the water, through its ability to entertain, motivate, and pace seamen in their work. Sailors and fishermen sing rhythmic songs called chanteys while pulling in nets, hauling anchors, and setting sails in unison. Songs are composed to commemorate battles at sea, pirate attacks, or storms. Some maritime songs celebrate particular bodies of water dear to a singer/songwriter's heart; others remind seafarers who and what waits for them on land.

The songs commonly known as sea chanteys (or shanties) are sung to help fishermen and sailors pace their work. The many different types of chanteys vary according to the desired rhythm and nature of the work. Types of chanteys include capstan, ceremonial, long haul/drag, short haul/drag, whaling, and windlass chanteys [see glossary at right for more definitions]. According to maritime scholar William Main Doerflinger,

"While shantying as we know it today reflects the unrivaled ships and seamen of the nineteenth century, the custom goes back to remote ages. It must have evolved from the instinctive practice of 'singing out' at work. The next stage was perhaps the singing of similar vocalizations to a real, though simple melody."

One of the best known short-haul chanteys is "Haul Away Joe," performed here by the Foc'sle Singers. In one of the oldest American chanteys, "Black Ball Line," The X-Seamen's Institute praises the speedy Black Ball ships. "Come All Ye Tonguers," by Jill King and Bob Webb, is a New Zealand whaling song, collected by American folk song scholar John Leebrick.

Sailors often write songs about notable events at sea, creating a lasting record. Cliff Halsam and John Millar sing "Yankee Man of War" about popular Revolutionary War hero John Paul Jones, "a Scotsman who was wanted for murder in the West Indies, [and] joined the infant Continental Navy as a lieutenant." Sometimes song lyrics were changed, in effect rewriting history. A version of "Santy Anna," recorded by Canadian folk singer Alan Mills, reverses the outcome of an important battle of the Mexican-American War. According to Mills,

"Antonio López de Santa Anna (1795–1876) was the last President of Mexico...He was badly beaten by the Americans under General Taylor at the battle of Molino del Rey in 1847. Originally, the shanty told how 'General Taylor won the day, and Santy Anna ran away,' but by some strange metamorphosis, Santy Anna became the hero of the battle he had lost."

Natural catastrophes—especially those that caused bodily harm or damage to ships—are also frequent topics of maritime songs, as demonstrated by the "Wreck of the C.P. Yorke," which describes a tragic accident involving a boat hitting a reef during a storm. Other events aboard ship, including mutiny, were recorded as well, as in the song "Dreadnaught." Sung by Tom Sullivan, the song recalls a Massachusetts ship captained by Samuel Samuels that was taken over by the crew before wrecking near Cape Horn in 1869.

In earlier days, seafarers spent some of their leisure hours singing and dancing below decks; their songs were called "forecastle songs" (the forecastle is the crews' quarters). Forecastle songs often expressed a longing for loved ones back home or the place left behind, such as "Homeward Bound," sung by Stuart Frank. Many contemporary singers and songwriters of maritime music grew up on the water, or lived near particular water ways for much of their lives. One such example is maritime singer/songwriter Tom Wisner, who seeks to pass on the love of his native Chesapeake Bay to listeners in the hopes that they will learn to appreciate it as he does. Wisner writes, "For me the experience of [the Chesapeake] region is first, one of seeing, and second, one of hearing. Many of the tunes have come to me while looking at my photographs or mulling over a drawing." Pete Seeger has written many songs about his beloved Hudson River. Over the years he has taken a lead in educating people about and cleaning up the river.

Just for Fun: Sounds of the Sea and Humorous Maritime Songs

Along with historical and contemporary songs of the water ways, the Folkways collection includes some interesting sounds of sea creatures and some humorous songs reflecting maritime culture. 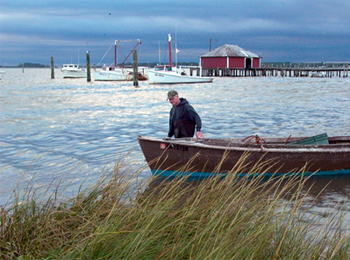 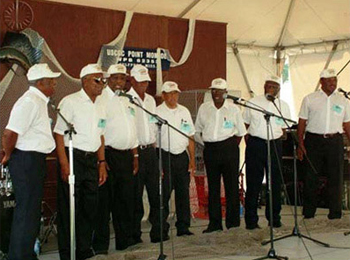 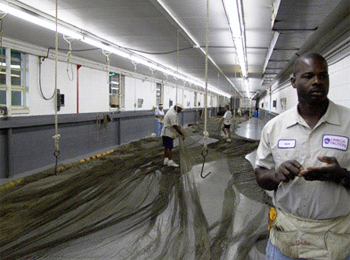 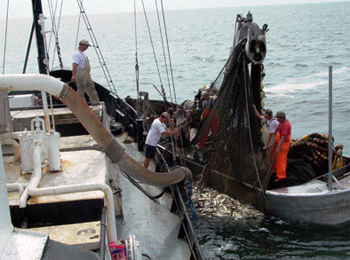 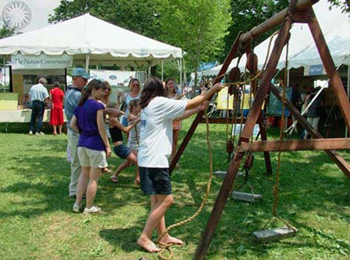 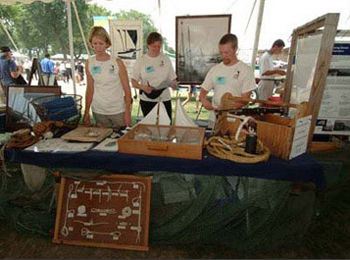 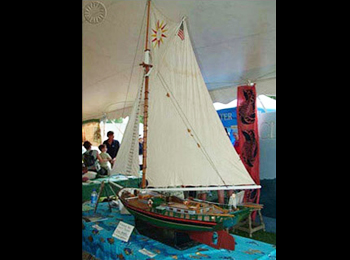 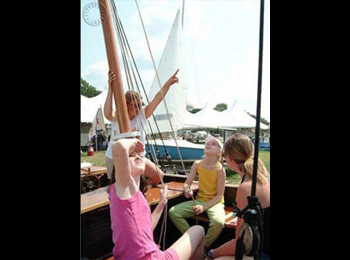 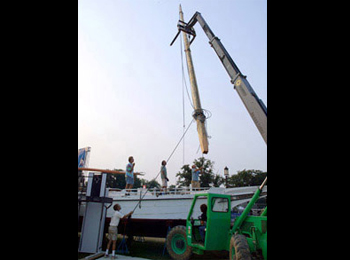 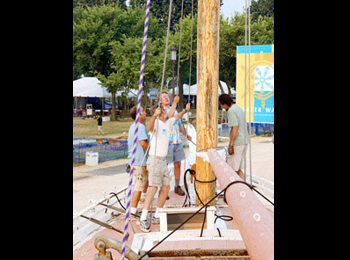 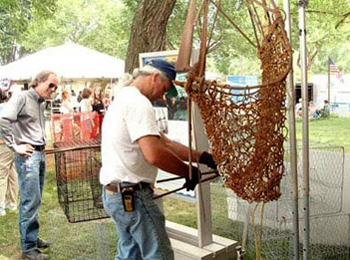 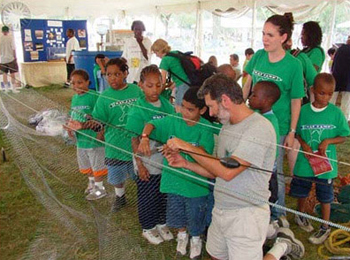 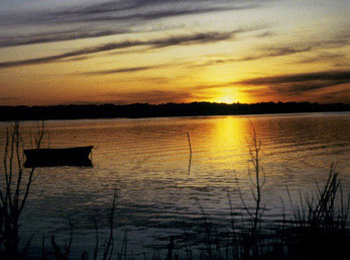 Photo by John Eilertson."/>
Ned Winder from Poquoson, Virginia, starts a new day of commercial fishing.
Photo by Harold Anderson.
The Northern Neck Chantey Singers from Northumberland and Lancaster Counties, Virginia, performing at the 2004 Smithsonian Folklife Festival. They are a group of retired menhaden fishermen who sing some of the chatneys that helped ease the work of pulling up heavy nets.
A menhaden net stretched out at the Omega Protein net factory in Reedville, Virginia. Imagine the work involved in pulling up this net by hand, full of tens of thousands of fish. This was the work once done by the fishermen of the Northern Neck Chantey Singers.
Photo by Harold Anderson.
="A small, independent menhaden fishing boat, the Hushpuppy, owned by Fred Rogers of Reedville, Virginia, pulls in its net full of fish by means of hydraulic device.
Photo by Harold Anderson.
At the ''Water Ways: Mid-Atlantic Maritime Culture'' program of the 2007 Smithsonian Folklife Festival, kids are taught sailing skills through activities like this simulation of pulling up the sails.
At the Festival, the staff of the schooner A.J. Meerwald, New Jersey's official tall ship, display a model of the ship as well as demonstrate skills like knot-tying.
A model of the Clearwater sloop, which takes educational cruises along the Hudson River, on display in the Kids' Coast tent at the Folklife Festival. Clearwater staff teach children about the health of the river and its fishy inhabitants.
Visitors to the Folklife Festival imagine themselves sailing on the high seas, while sitting in a model tall ship owned by the National Maritime Heritage Foundation based in Washington, D.C.
Ship restoration experts from the Coastal Heritage Alliance and Smithsonian Folklife Festival crew work together to step in a new mast for the skipjack Joy Parks, a historic Chesapeake Bay oyster dredging boat.
Photo by Steve Kidd.
Ship restoration experts from the Coastal Heritage Alliance work on rigging the lines to the new mast of the Joy Parks.
Photo by Steve Kidd.
Delaware Bay fisherman Scott Shepard repairs an oyster dredge at the 2004 Smithsonian Folklife Festival.
12 Commercial fisherman Danny Bowden from Chincoteague, Virginia, lets young visitors help with a net at the Folklife Festival.
The sun goes down near East Hampton, New York, on Long Island. This area has been home to many generations of fishermen, boat builders and other maritime workers.
Photo by John Eilertson.
Audio 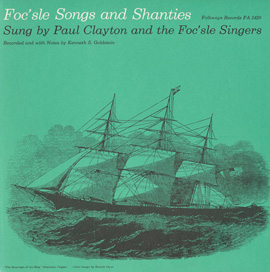 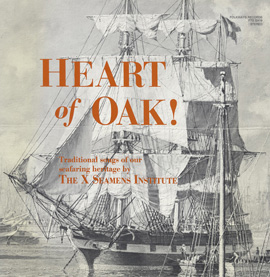 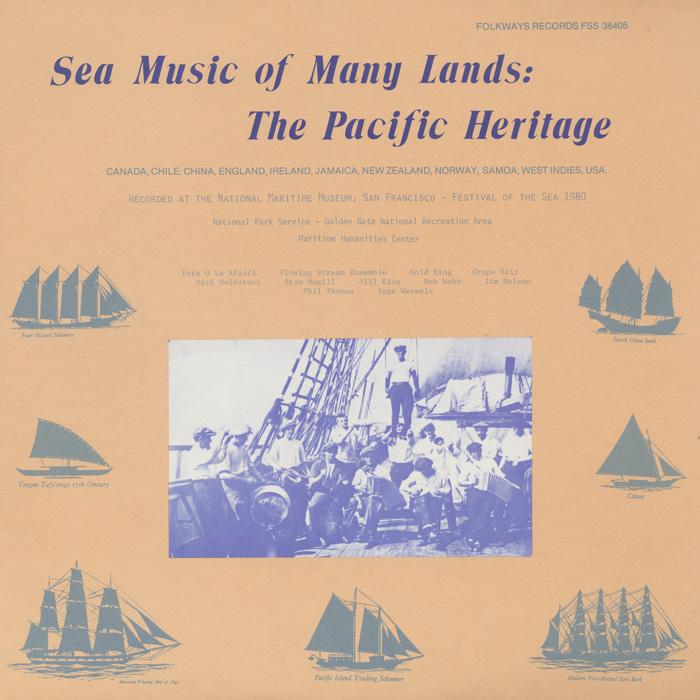 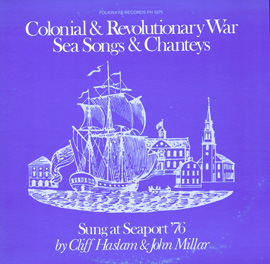 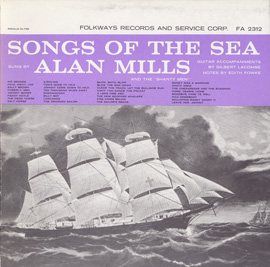 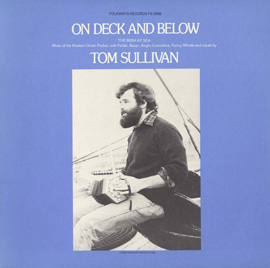