Won't You Come and Sing For Me?

Won’t You Come and Sing for Me? is the second album by Hazel Dickens and Alice Gerrard. Their hard-driving style and soaring harmonies broke the glass ceiling of male-dominated bluegrass in the 1960s. Hazel and Alice inspired generations of women in bluegrass and beyond. Their influence has been acknowledged by artists as diverse as country superstars Naomi and Wynonna Judd, champion flat-picker Molly Tuttle, and proto-feminist punk rocker Kathleen Hanna. This landmark record includes blazing takes on songs penned by the Stanley Brothers and the Louvin Brothers as well as timeless older works by the Delmore Brothers and the Carter Family. It concludes with “The One I Love Is Gone,” a haunting and poignant piece written (but not recorded) by the father of bluegrass Bill Monroe, who personally sang it for Hazel and Alice. The album’s title song, written by Hazel, has become a widely recorded bluegrass classic.

Hazel and Alice are accompanied by Lamar Grier (banjo), David Grisman (mandolin), Billy Baker (fiddle), and Mike Seeger (guitar). Unavailable on vinyl for decades, Won’t You Come and Sing for Me? was remastered in 2021 by its original producer Peter K. Siegel, and has been reissued with its original artwork and liner notes. 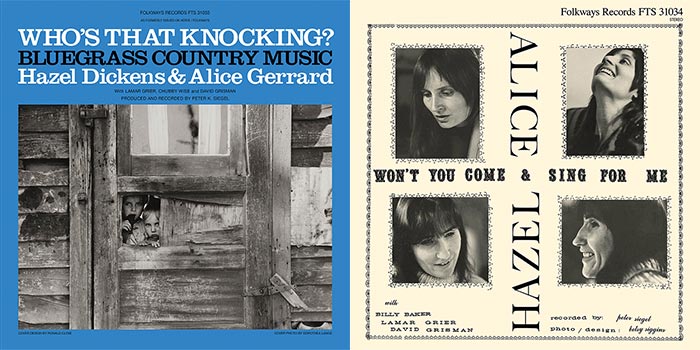 For a limited time order both Who's That Knocking? and Won't You Come And Sing For Me? vinyl reissues at a discount.
View Cart Buy Vinyl Bundle $41.98