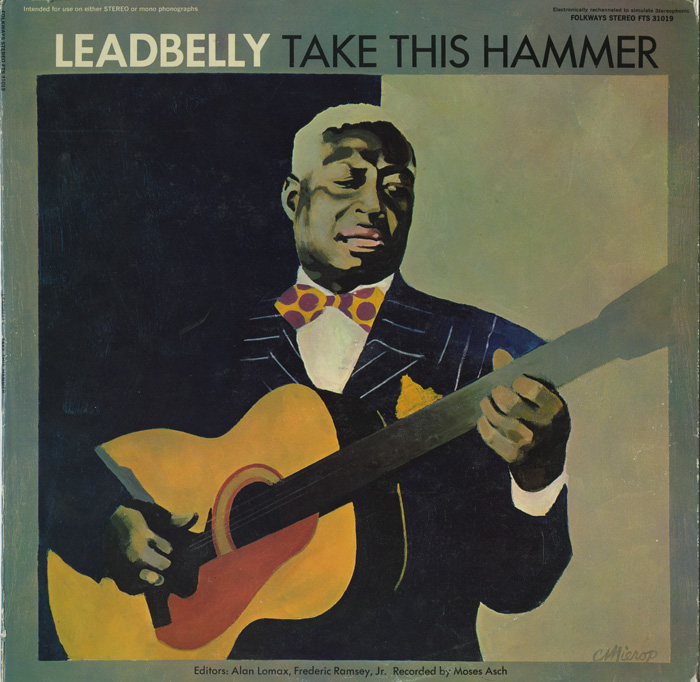 Take This Hammer by Lead Belly was a 1968 LP reissue of two monophonic releases from the 1950s (Take This Hammer and Rock Island Line) that were “electronically rechanneled to simulate stereophonic sound.” It includes such classics as “Good Night, Irene” and “Pick a Bale of Cotton.” Lead Belly, with “his steel voice, his steel arm on the twelve strings, and his high-voltage personality" played such classics as “Good Night, Irene," “Pick a Bale of Cotton," and others. Songs from this album, remastered from the original mono without the rechanneled stereo effects, are available on the 1996 release Where Did You Sleep Last Night: Lead Belly Legacy, Volume 1. The album cover art by Craig Mierop is included in the University of Alberta exhibition The Look of the Listen: The Cover Art of Folkways Records, and this exhibition is featured in the Spring, 2012 issue of Smithsonian Folkways Magazine. Liner notes include a brief biography of Lead Belly by famed folklorist Alan Lomax.

This item is not for sale in any format, refer to the abstract for information on finding these recordings elsewhere.