Through her classic recordings, Lucy Stewart of Fetterangus, Aberdeenshire (1901-82), became one of Scotland's most influential "source singers. " Her renditions of traditional Scots songs and ballads helped fuel a renaissance of interest in Scottish music that began in the 1960s and continues to grow.

Lucy was first recorded by the folklore scholar Kenneth S. Goldstein, who spent almost a year living with the Stewart family in 1959-60 and recorded vast amounts of traditional material including ballads, stories, riddles, and children's games. From Lucy alone he was able to collect more than 175 ballads and songs that she had absorbed over the course of her life from her family and neighbors, who would gather around the fire on cold winter nights entertaining themselves with songs and stories. Remarkably, wrote Goldstein:

"Lucy's tradition was a wholly private family matter. In the very village in which she lived, no one outside of her family even knew that she sang. She was extremely reticent to sing in the presence of persons not related to her, and it took more than two months to pry loose from her the first song. Once we had established full rapport—and I was almost literally adopted into the Stewart clan—her song flowed in a seemingly endless stream."

Yet she was a magnificent singer—tuneful, convincing, and possessing clear enunciation. Her spoken dialect was that of the "traveling people" of northeast Scotland, but she might have modified her vocabulary and pronunciation while singing in order to make it easier for outsiders to understand. Goldstein himself noted that she sang differently when a microphone was placed in front of her.

Lucy Stewart was born in the small Scottish country village of Stuartfield in 1901, in the heart of the Buchan District of Aberdeenshire. Her father, James Stewart, claimed to be a descendant of the Stewarts of Appin, a famous Highland family who fought on the side of Prince Charlie at Battle of Culloden in 1746. He had been a tinsmith, a farm servant, and an odd-job worker in Aberdeenshire before becoming a piper with the Gordon Highlanders regiment. Elizabeth Townsley, her mother, was born in Northumberland in northern England, where her father had been a horse dealer and a showman with a traveling circus. The family moved to Fetterangus in northeast Scotland in 1917, and Lucy remained there until her death in 1982.

Like her father, all of Lucy's brothers were first-class instrumentalists on bagpipes, fiddle, pennywhistle, or accordion, and her sister, Jean, was a professional musician with her own dance band. So it was often Lucy who took responsibility for looking after Jean's children while she was out performing. Jean's daughter, the respected contemporary Scottish traditional singer Elizabeth Stewart, loved the songs she heard her aunt sing, and she has followed in the footsteps of both her mother and aunt by forming her own dance band and singing many of the songs she learned from Lucy.

The Stewarts of Fetterangus were a family typical of the traveling folk. Often suffering discrimination from members of settled society, Travelers tended to socialize with other Travelers, exchanging songs, stories, and gossip and keeping alive the rich Scottish traditions that were beginning to be forgotten among other groups. In the 1950s and 1960s when folk-song collectors like Kenneth Goldstein were seeking out performers of traditional material—communities in which songs and stories were still handed down orally and the ballad tradition continued to thrive—Travelers communities like the one in Fetterangus proved to be a gold mine.

Ballads are essentially stories told in song. There are, however, many songs which tell stories yet are not ballads. Ballads additionally tend to start in the middle of a story and put emphasis on dialogue and action rather than description. There are generally a limited number of characters featured in the narrative, often no more than three, and story lines tend to involve lots of blood and gore, often with a generous dose of fratricide, incest, adultery, and the supernatural. Many Scots-language ballads date back to the early medieval period, and some are probably considerably older. In some cases, singers inherit versions of ancient ballads in which all that remain are a few confused stanzas of dialogue. Listeners have to look at other versions—or "variants"—of the same ballad to determine what is happening.

Although not an active performer outside her own home, through her recordings Lucy Stewart has been instrumental in keeping alive some magnificent versions of ballads, including such classics as "Doon by the Greenwood Sidie" (also known as "The Cruel Mother") and "The Swan Swims So Bonnie" (frequently called "The Twa Sisters" or "The Dreadful Wind and Rain"). Her versions and striking performance of these and other great Scots ballads helped shape the core repertoire for a whole generation of contemporary Scottish performers. Folkways Records originally intended to produce three albums of Lucy's singing, but only the first volume, Lucy Stewart: Traditional Singer from Aberdeenshire, Scotland, Vol. 1 - Child Ballads (FW03519, 1961), was actually released and is now available on Smithsonian Folkways. 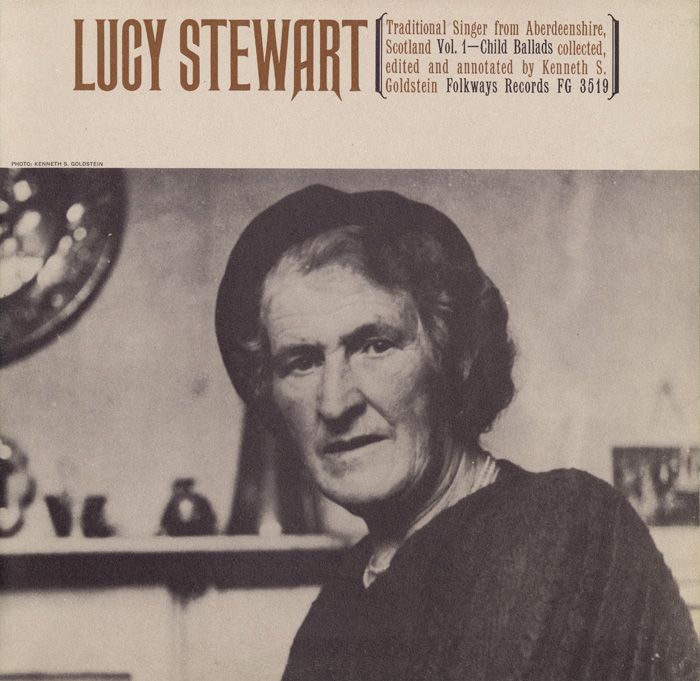