Pete Seeger has had a long and productive career as a folk song leader and social activist. He grew up in a musical family. His father was the musicologist Charles Seeger and his mother, Constance, a classical violinist. At one point in his youth, Seeger and his brothers traveled with their parents in a wagon entertaining throughout the countryside. When he was sixteen he accompanied his father to Bascom Lamar Lunsford's folk festival in Asheville, North Carolina. It is there he first encountered the banjo and fell in love with it.

He originally went to Harvard hoping to become a journalist but did not find what he was looking for there. In 1938, he settled in New York City and eventually met Alan Lomax, Woody Guthrie, Aunt Molly Jackson, Lead Belly and others. The quality of music coming from this group was outstanding. He also assisted Alan Lomax at the Library of Congress' Archive of Folk Song and was exposed to a wonderful array of traditional American music. Many of this group of musicians eventually formed the Almanac Singers in late 1940. The group was made up of Pete, Lee Hays, Woody Guthrie, Bess Lomax, Sis Cunningham. Mill Lampell, Arthur Stern and others. They lived in a communal home, "The Almanac House" in New York. The group performed for gatherings, picket lines, and any place they could lend their voices in support of the social causes they believed in. Later after World War II many of the same people would become involved in the musical organizations, People's Songs and People's Artists.

In 1943, while on military leave Seeger recorded in New York during a production of Earl Robinson's Lonesome Train. During the same sessions he stopped by Moses Asch's little studio and recorded his first acetate discs for Moe's Asch record label. They were Spanish Civil War songs. This was the beginning of a very long and prolific relationship between the two men.

In 1949, Pete Seeger began to perform with three other musicians, his old partner Lee Hays with the booming bass voice, Fred Hellerman on guitar and vocal, and a young woman with a soaring voice, Ronnie Gilbert. They called themselves the Weavers. Oddly for Seeger, the Weavers began to perform in nightclubs wearing formal attire. They had lovely arrangements of American folk songs, many written by old friends such as Lead Belly and Woody Guthrie. It was odd because the Weavers music made the American "hit parade" which like "nightclubs" was a place you were unlikely to find Seeger. Some of their more popular songs were "Michael Row the Boat Ashore", "It Takes a Worried Man", "Wimoweh","Kisses Sweeter Than Wine" but none more popular the double sided 78 rpm hit "Goodnight Irene" and "Tzena Tzena Tzena" which went number one and number two on the hit parade in 1950. One was a Hebrew folk song and the other a tune learned from their friend, Lead Belly, who, alas had died the year before.

Later that same year the book, Red Channels, appeared. In the growing anti-Communist hysteria following World War II it named well-known Americans, many from the entertainment field, it listed as communists. Seeger's name appeared in the book and very soon the Weavers' television program was cancelled as well as many of their performances. This began what was to be about a seventeen year period where Pete Seeger was under the influence of the ominous blacklist. As late as 1967, when the blacklist had faded for most, Seeger still had difficulty getting on network television.

Membership in groups like People's Songs was bound to get you subpoenaed and most of the members of the New York folk music scene were under suspicion. Pete watched as one by one his friends and colleagues were called before HUAC. Finally, on August 14, 1955 it was his turn. When queried by the committee, he refused to answer any questions about his political beliefs stating that "these are very improper questions for any American to be asked" (Dunaway, pg. 213). His testimony made it likely that he would be charged with numerous counts of contempt of congress. This would occur in July 1956 followed by an indictment in 1957. The trail would come much later, hanging over Seeger's head for the rest of the decade.

Unable to ply his trade in all the most lucrative locations and his travel scrutinized, Seeger's music went underground. This was his period of explosive energy and creativity. Seeger biographer David King Dunaway points to the years 1954 to 1958 where Seeger was releasing six LPs a year. (Dunaway, pg. 218). Seeger supported his family during the "blacklist" by constant traveling, playing small venues; releasing numerous albums, producing documentary films, and even producing a fairly strong selling book on how to play 5-string banjo. Moses Asch, who in 1948 had started his Folkways label, was an old friend and supporter. He could care less about blacklists and published dozens of records during the 50s and early 60s by Pete Seeger. While the blacklisters were worried about Seeger singing before Middle America on television, radio or nightclubs meanwhile his children's records were entertaining a new generation of youngsters in schools and summer camps. Seeger also made many personal appearances at schools, camps, and community events. His great children's albums from this period are still best sellers including his own story Abiyoyo. His series American Favorite Ballads taught a whole generation of young Americans the great American folk songs Seeger had learned from others and from some of the most important folk song books. (This was reissued as a multi-compact disc set in 2009).

What is interesting is that Seeger adopted the concept of "Johnny Appleseed" for his column in Sing Out! Magazine "Appleseeds." Sing Out! is the number one magazine of the folk movement. Seeger has always valued the idea of music as a way of bringing community together for a common cause. His favorite concert performances are those where the audience does most of the singing and he leads. His performances, recordings, books, all leave seeds behind which grow with those who have experienced them. Many of the young people who heard Seeger in the 1950s became the leaders of the new "folk song revival" which began in the late 1950s; Musicians like the Kingston Trio's Dave Guard were influenced to take up music. It is unfortunate that as the "folk revival" peaked when young groups were landing big record contracts and selling crates full of records that the man who started them out was blocked from taking advantage. During the peak years of the revival, the big music business took notice and tried to cash in. There was even a network television show called "Hootenanny" which would not let Seeger perform, the very man along with Woody Guthrie had introduced the public to the word "hootenanny".

As part of a campaign to arrange shows for Pete, his manager Harold Leventhal coordinated what he called "Pete Seeger Community Concerts". These were to "present Pete to an audience outside the confines of the metropolitan area of New York under the auspices of various community groups". (flyer in Ralph Rinzler Archives). Seeger played dozens and dozens of college "gigs". "They were some of my most important work" said Seeger (from the film The Power of Song". His frequently came in to a college town with the concert announced not long before, he would do an interview on the college station, do the show and be gone before the anti-Seeger protesters could organize a rally against him. For some of the colleges he performed yearly starting with Oberlin College in Ohio.During 1958 and 1959 leading up to a 1960 concert at Bowdoin College in Maine, he performed at Texas, Oklahoma, Colorado, Ohio State, Michigan, Pennsylvania, Cornell, Harvard, Yale, Princeton, Hamline and others.

In the early 1960s, Pete traveled the world, entertaining in many concerts. He brought some great topical songs back from his trip to the British Isles in 1961.

In March 1961, Seeger was tried on the contempt of Congress charge and convicted. He was subsequently sentenced to ten years in jail. Thankfully, in May 1962 the Court of Appeals decided the indictment was faulty and threw out the case (Dunaway, pg. 259). Now free to move freely and without the cloud of prison hanging over his head, Seeger began to be involved in more movements none more important than the Civil Rights Movement. Seeger was involved with Martin Luther King and others marching in the South. He was one of the people at a gathering at the Highlander School in Monteagle, Tennessee who re-worked the hymn "I Will Overcome" into the great iconic civil-rights anthem "We Shall Overcome". He also was a strong voice against the Vietnam War penning great anti-war songs like "Waist Deep in the Big Muddy" and "Bring 'Em Home". The fight to protect the environment also got a lot of his attention.

Seeger had heard the phrase "think globally, act locally" and it got him thinking about his own area around Beacon, New York (Seeger, in the film, Power of Song). His home is on a hill over the Hudson River, which by the mid-1960s had become a festering polluted mess. Seeger and friends built the sloop Clearwater and sailed up and down the river performing and raising awareness of the problem. Ultimately the river became cleaner and cleaner and the polluters were stopped, which shows what single-minded perseverance can accomplish..

During the rest of his career, Pete Seeger has released the occasional album but still frequently performs for any group or cause that could use his help. At 90, he has tried to slow down but still is there when needed. In January, 2009, he was seen singing "This Land is Your Land" before hundreds of thousands on the Lincoln Memorial steps during the inauguration of Barrack Obama as President of the United States. A Kennedy Center honoree, Pete Seeger has been suggested as a worthy recipient of the Nobel Peace Prize. After all these years, he has outlasted his critics, having been bent but never broken and standing tall.

Jeff Place, March 2009
(these notes are excerpted from the notes to Smithsonian Folkways 40184)

Sources: Dunaway, David King, How Can I Keep from Singing?: The Ballad of Pete Seeger, New York: Villard Books, 2008 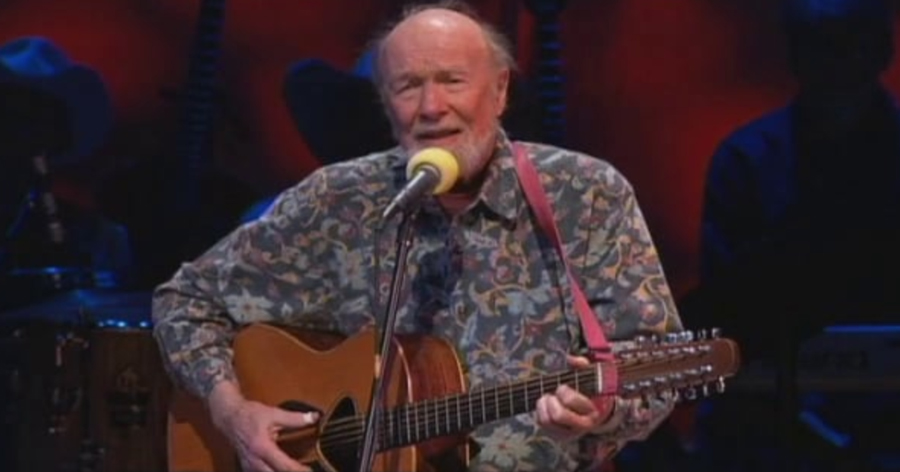 Pete Seeger live performance and interview. Clips from the Smithsonian Folkways Concert in honor of Ella Jenkins at the Music Center at Strathmore, 2005. 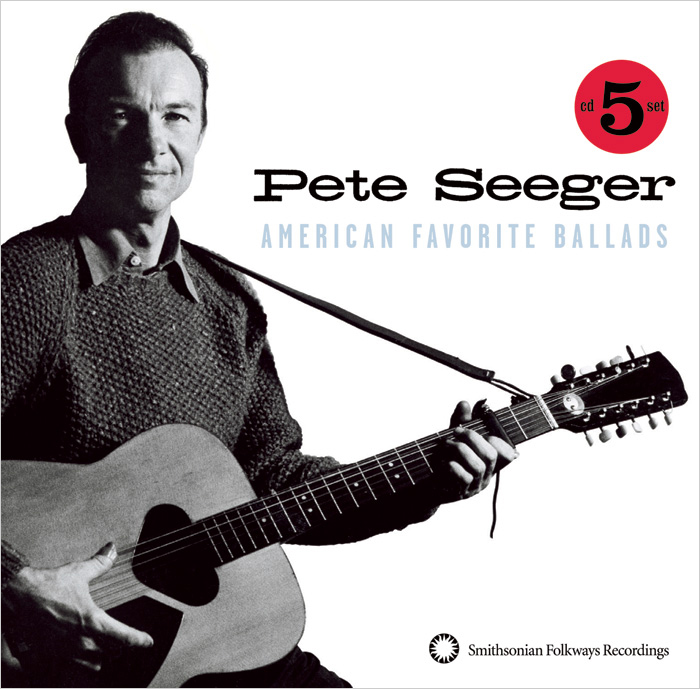