On August 14, 1985, in the midst of a bloody and protracted conflict between Maoist Shining Path guerrillas and the Peruvian state, an army patrol entered the town of Accomarca and killed 62 residents suspected of collaborating with the insurgents. Even in the context of the ongoing war, this was an especially brutal massacre. Dozens of those killed were children or elderly, and eyewitness accounts held that many female victims were raped prior to being shot and their bodies incinerated. Seven witnesses were also hunted down and killed the following week, presumably to prevent them from testifying about what they had seen. Despite extensive evidence to the contrary, subsequent investigations by the Peruvian Congress and the military absolved the soldiers of all responsibility. As the violence dragged on and new atrocities demanded public notice, the events and mass graves in Accomarca quietly receded from national attention—literally and figuratively buried again, where they would remain for nearly two decades.

I began field research in the Fajardo Province of Ayacucho, just across the Pampas River from Accomarca, fifteen years after the Accomarca massacre, and a little more than seven years after the capture of the Shining Path leadership that marked the transition to an uneasy peace. I had arrived to investigate the role that music had played in this conflict and its aftermath, and my choice to work in Fajardo was based in part on its location at the very heart of the war zone. I already had some sense of the ways that music in this region might be used as a vehicle to remember the violent past. Upon my arrival to Peru, in January of 2000, while reviewing field recordings archived at the Ethnomusicology Institute in Lima, I stumbled across a recording of “Señor Cáceres,” a carnival song recorded in the mid-1990s that told of local involvement in the War of the Pacific more than a century before. What, I wondered, did other carnival songs have to say about the more recent conflict? And what might they tell us about music’s capacity for remembering and working through traumatic pasts?

Over the course of the next two years, I recorded hundreds of songs in villages through the central Fajardo Province, in contexts that ranged from private recording sessions in musician’s homes to large, open-air competitions held annually during the carnival season for hundreds of spectators. Nearly every group that I recorded had composed songs about the conflict, both during and after the years of violence, and many of these canciones testimoniales (“testimonial songs”) revealed a great deal about local experiences and attitudes toward the war. Indeed, people often seemed more willing to sing about the conflict than they were to talk about it. A Fajardino songwriter and schoolteacher named Adriancha Quispe, who fled the outbreak of violence as a young man, put it to me like this: “People in rural areas could not speak out. So they said it in songs.”

In February of 2001, I visited Fajardo’s provincial capital to record the “Hummingbirds of Huancapi,” a group renowned for “saying it in songs” with a ribald sense of humor and oft-fierce political commentary. The Hummingbirds were one of several dozen groups in the region who specialized in a carnival genre known as pumpin, played on 12-string guitars and sung in Quechua in the high, strident vocal style typical of much highland Andean indigenous music. Notably, pumpin was also a prominent genre in the testimonial song movement, and I hoped to learn from the Hummingbirds some of the reasons for that prominence.

Bundled against the chill mountain air, we began our evening together huddled around my microphone and a bare light bulb in their neighbor’s small adobe home. Founded by two sisters then in their late 40s, the Hummingbirds had been writing songs for decades, and our first challenge was to pare that catalog down to roughly a dozen pieces that we would have time to record. True to their reputation, their choices ranged from the rudely carnavalesque (“Supiycha” or “Little Fart”) to the bitingly political (“Vladivideo,” a reference to the corruption scandal that had toppled the government of Alberto Fujimori just two months earlier). Somewhat to my surprise, however, given their penchant for commentary on current events, one of the first songs they chose was also one of their oldest: “Accomarca Soldadito,” which they had written several years after the 1985 massacre.

Many testimonial songs eschew polemics, emphasizing commemoration of those lost, or ruminations on collective suffering, stepping gingerly around the question of who was to blame for the violence. The careful way in which such memories were framed in the early 2000s, while I was conducting fieldwork, reflected the delicate state of peace still taking hold in the region. This peace was governed by what anthropologist Kimberley Theidon has called the “micropolitics of reconciliation” among communities—and even within families—torn apart by two decades of violence. In “Fosas Clandestinas” (“Mass Graves”), for instance, one of the prize-winning songs from the regional championship carnival contest in 2002, the “Fajardo Stars” pointedly avoid naming those at fault for Accomarca and other nearby massacres. Rejecting such discretion, however, the Hummingbirds’ song about Accomarca directly confronted the soldiers who they deemed responsible:

Sons and daughters of the poor, little stone-hearted soldier
Swallowing dynamite,1 you forget that in the town of Accomarca
You killed all of the people
Innocent or guilty
They died all the same

As the song faded to silence in the quiet room, one of the older singers spoke up to note that, with this composition, they had won the local carnival song competition in 1989. Surprised that they were able to publicly sing such incendiary lyrics at the height of the war, I asked what the reaction was to their performance at that time. Chuckling, she replied that the audience applauded enthusiastically, but a number of soldiers posted at the military base in town complained and began firing their guns in the air, hoping to break up the event and intimidate those present. This was not the first time that I had heard of this tactic being used by the military, but it threw into stark relief the risks that this group had taken in writing and performing such a provocative piece. When an accompanying colleague, a local anthropologist and human rights worker, followed up by asking why they took such a risk, the singer simply replied: “Because they killed my husband, the father of my children.”

Later that evening, after recording several other songs about various corrupt politicians, the Hummingbirds also decided to include the song “Matanza en Cayara” (“Cayara Massacre”), which they dedicated “with affection, to all the orphaned children and widows left behind.” Spoken by one of those very widows, whose children sat behind her watching the recording session throughout the evening, it was a powerful reminder of just how present the violence of the past remained, and of music’s role in forging and mediating that connection.

August 2013 will mark the tenth anniversary of the Peruvian Truth and Reconciliation Commission’s final report, detailing the causes and history of political violence in the country between 1980-2000. Widely lauded by the international human rights community for the integrity of its investigation and even-handed conclusions, the Commission’s report was nevertheless hotly contested in Peru—especially by those implicated in its findings—and it remains a political lightning rod to this day. As the country gears up for the inevitable controversies that will surround this anniversary, it will once again confront the thorny question of how, and even whether, Peru’s violent past should be publicly remembered and commemorated.

Far from the headline-grabbing debates over official monuments, the national Museum of Memory now under construction in Lima, and legislation to provide reparations for the victims of the violence, musicians and dancers from Ayacucho will continue to grapple with the question of how to remember, as they have for several decades. Though the composition of new carnival songs about the war has abated in recent years, older testimonial songs are finding new life through video clips—now the predominant way that rural music is recorded and disseminated in Peru—and the search for historical justice and lasting peace continues to find expression in music and dance. In March of 2013, twenty-eight years after the massacre that decimated Accomarca, several hundred young migrants from that region competed in a carnival competition in Lima that was organized by a local radio station. At the heart of their performance was a reenactment of the tragic events, followed by a call for recognition of their suffering, and for justice that has so long eluded them.

Jonathan Ritter is associate professor of ethnomusicology at the University of California at Riverside.

1 A reference to a Peruvian military practice of initiating new soldiers by having them consume dynamite dust to “strengthen” them. The practice was also taken up by civilian patrols during the war. 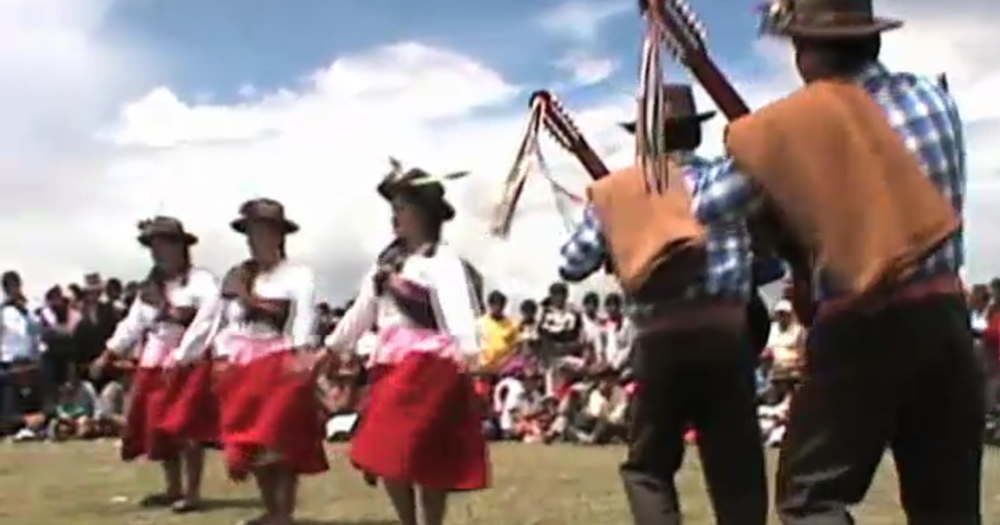 Field recording of the Hummingbirds of Huancapi. Recorded in Huancapi, Ayacucho, Peru, on February 16, 2001.