Samuel Gesser was best known across Canada as an impresario, a man who produced more than six thousand folk, classical, pop music, dance, and live theatre performances featuring many hundreds of artists—from Leonard Cohen to Janis Joplin; virtuosi Julian Bream, Van Cliburn, and Isaac Stern; the New York Philharmonic Orchestra; national folkloric dance ensembles from Africa, Asia, and Europe; classical and modern dance companies from Alvin Ailey to the Royal Winnipeg Ballet; musical theatre galore; and European and Chinese opera. In the 1960s he programmed jazz and classical music festivals as well as the Canadian pavilion stages at World Fairs in Montreal (Expo 67) and Osaka, Japan (Expo 70). After he retired from concert production in the 1990s, he wrote movie scripts and plays.

Sam would have been 80 years old on January 7, 2010. He and I became friends during the last several years of his life, and I miss him. All who knew him miss him. The last time I saw Sam, we were together in the Canadian Museum of Civilization in Gatineau, Quebec (just across the Ottawa River from the Canadian capital city in Ontario), where Sam had received the museum's Resonance Award for his outstanding lifetime contribution to Canada's musical heritage. Standing onstage on that first December night in 2007, he looked out at all of us in the audience filling the spacious hall for the Canadian Folk Music Awards and marveled, "When I started, I was the only one."

His legend originates much earlier, going back to when he was a boy growing up in working–class Montreal. Sam listened to folk music while babysitting for his uncle's children, and recalled the thrill of hearing the likes of Lead Belly, John Jacob Niles, and Josh White on 78 rpm records. During a vacation in Chicago from his job as a commercial artist (probably in 1950), visiting local jazz clubs and soaking up the scene, he spent some time browsing in a record store and found a Lead Belly 10-inch LP. Then, on his way back to Canada he read the list of other Folkways recordings in the album's booklet. He visited several record stores in Montreal, but not one of them carried Folkways records. In trademark Gesser fashion he took a bus south to Manhattan and went to Folkways Records and Service Corp.'s office to meet Folkways founder Moses Asch. "Why can't I find Folkways in Montreal?" I imagine Sam demanding of the older man. Asch told him Folkways needed a Canadian distributor—all Sam had to do was visit those record stores and take orders. Thus Gesser took his first step into the music business, and slowly grew a native Canadian network of record stores that carried Folkways titles. Ethnomusicologist Regula Qureshi interviewed Sam, who recalled:

During my first year with Folkways, I mentioned to Mr. Asch that their catalogue did not contain any Canadian records except for a Plains Indian LP. His response was "What are you going to do about it?" So I started recording folk singers, doing field recordings in the nearby Laurentians and contacting folksong collectors that devoted their lives to recording Canada's vocal history. I did have to promise to purchase a minimum of 100 albums of each of the tapes submitted for publication, making me a very motivated distributor.
(Qureshi 2007)

Between 1951 and 1964, Sam produced or helped along over a hundred Folkways albums of Canadian-based traditions: Aboriginal, First Nations, French, Anglo (British, Scots, Irish), Caribbean, Spanish, South American, German, Near Eastern, and Ukrainian music, poetry, language instruction, and more. Gesser's verbal contract with Asch was simple: he had to promise a wholesale purchase of one hundred copies of each title pressed. Sometimes he recorded the material himself, sometimes he simply gave the artist or producer of something he thought would fit the Folkways catalogue the address in New York. Moe never refused an album Sam offered him. Classic Canadian Songs from Smithsonian Folkways is a one-album overview of that extraordinary accumulation of music from the vast Canadian nation.

As you listen to Classic Canadian Songs, with its array of songs about occupations, courtship, drinking, historical events, politics, patriotism, and spiritual conviction, or tap your toe to the instrumental dances, remember that, then as now, music-making was integral to the lives of Aboriginal peoples and immigrants alike—a means of connecting what and who they were with what and who they had been, a means of preserving self- and cultural identity, and a means of fostering relationships within and across cultural boundaries.
(Dalen 2006, 6)

Artists whom Sam Gesser introduced to the Folkways catalogue include Canadian folk giants Alan Mills, Hélène Baillargeon, Jacques Lebrecque, and fiddler extraordinaire Jean Carignan. Sam likewise was responsible for Folkways releasing performances by well-known classical violinist Hyman Bress, Canadian maritime songs, Jewish folk songs, and much more. After Folkways, he put together compilations of Canadian folk music for Mercury Records, later Universal. As a body of works it was a magnificent accomplishment and an important seedbed for what came to be known as the Canadian folk music revival.

...Canadian albums speak in the voices of America's closest, and most closely related neighbour, and like-minded folks from both countries have long been sharing music and culture as well as social concerns across their national boundary. Folkways recordings and what they stand for easily found a Canadian constituency. Canadian performers and collectors entrusted Folkways with their materials, and this appreciation was a natural basis for trusting the label.
(Qureshi 2007)

By the late 1950s, some of the music Gesser had produced for Folkways had made its way into elementary school classrooms. Wayne Grigsby is a renowned Canadian film producer, formerly a print and broadcast journalist, and was a friend of Sam's from 1971 until Sam died.

Maybe in elementary school we would have sung Alan Mills' "I know an old lady who swallowed a fly" sort of stuff but I didn't connect it to Sam... I knew about Jean Carignan...but I didn't know that Sam was the guy who recorded him until years later.
(Grigsby 2009)

All of this would have been enough to make him a legend in some circles. But not long into the distribution business, Gesser recognized that live performances by artists would boost his album sales. He put together a Pete Seeger concert in Montreal, and then in 1954 founded Gesser Enterprises, which unfolded as did his over forty years of impresario activity: all across Canada. His work had a lasting effect upon Canada and many Canadians. I asked Wayne Grigsby about the impact of Sam's work on him personally:

I met him, metaphorically, in 1965 when I was at university taking some theatre courses. He was presenting Marat/Sade at Place des Arts [an important performance venue in Montreal]. He had called around to all the theatre schools and offered free tickets... I was completely blown away by the production—Peter Brook's Royal Shakespeare Company—"Holy mackerel! That's theatre?" ...Over the next few years it slowly dawned on me that all the shows that I was interested in tended to be presented by Sam. He presented Janis Joplin, he presented Marat/Sade, he presented (this was later) the Shanghai Ballet, the Beijing Opera—that would be Sam; Pete Seeger, that would be Sam. It was just intriguing to me that there was this guy who didn't want a lot of publicity and presented interesting shows.

Grigsby tried to interview the producer for several years, but Gesser characteristically always directed him to the artists themselves, generally shunning the limelight.

By his work both as a Folkways record producer and impresario Gesser quietly influenced the formation of post-World War II Canadian art and culture policy, particularly as Canada awakened to the Francophones' (native French speakers) claim of identity and recognized it as valid, perhaps more subtly in the realization of Aboriginal land claims. "Sam influenced the [social and cultural] fabric in the sense of his being out on the leading edge; he influenced people who later influenced," commented Grigsby. Gesser's interest in Canadian music traditions was influenced and deepened by Marius Barbeau's work, and he steered some of Barbeau's recordings to Folkways Records. The anthropologist Barbeau (1883–1969) recorded extensively during a lifetime of fieldwork—early on with French–Canadians, and for decades among indigenous peoples in Ontario, Quebec, and British Columbia (Folkways FG 3502/FW03502). Folklorist Helen Creighton (1899–1989) was another whom Gesser encountered. She recorded thousands of songs, largely in the eastern Canadian Maritime provinces (FM 4006/FW04006 and FE 4307/FW04307). He worked with those famous scholars to represent their material to the world beyond the academy and museum. "He thought it deserved a wider audience," said Grigsby. According to Grigsby, the politicians thought of Gesser:

Here's a guy who's recording Ukrainian folksongs and Polish folksongs and Nova Scotia folksongs and Newfoundland folksongs and poets, and that's all good... He was part of a zeitgeist. Sam was doing in the private sector what the government was trying to do in public policy. I think he was saying, "This isn't stuff to be stuck in a museum, this is stuff that ought to get out on the road."

And Sam Gesser saw to it that music and performance arts made their way from Newfoundland to British Columbia, from small-town concerts to World Fairs, and by those Folkways recordings into homes around the world. Gesser was always friendly and unassuming, and easy to talk with. Occasionally, he questioned how he accomplished all he had during his long career, or even why he thought he could do it. "I just did what I really wanted to do, what really interested me," he said, "and it never occurred to me that it was impossible."

This article is drawn from several sources: videotaped interviews with the late producer and impresario conducted by University of Alberta's folkwaysAlive! scholar Brenda Dalen and this author in Montreal during several days of October 2007; references cited, and especially the telephone interview with film producer Wayne Grigsby. Copies of the videotaped 2007 interviews are available in the collections of folkwaysAlive!, Department of Music, University of Alberta in Edmonton, Canada and the Smithsonian Center for Folklife and Cultural Heritage, Ralph Rinzler Folklife Archives and Collections in Washington, DC.

D. A. Sonneborn is the associate director of Smithsonian Folkways. 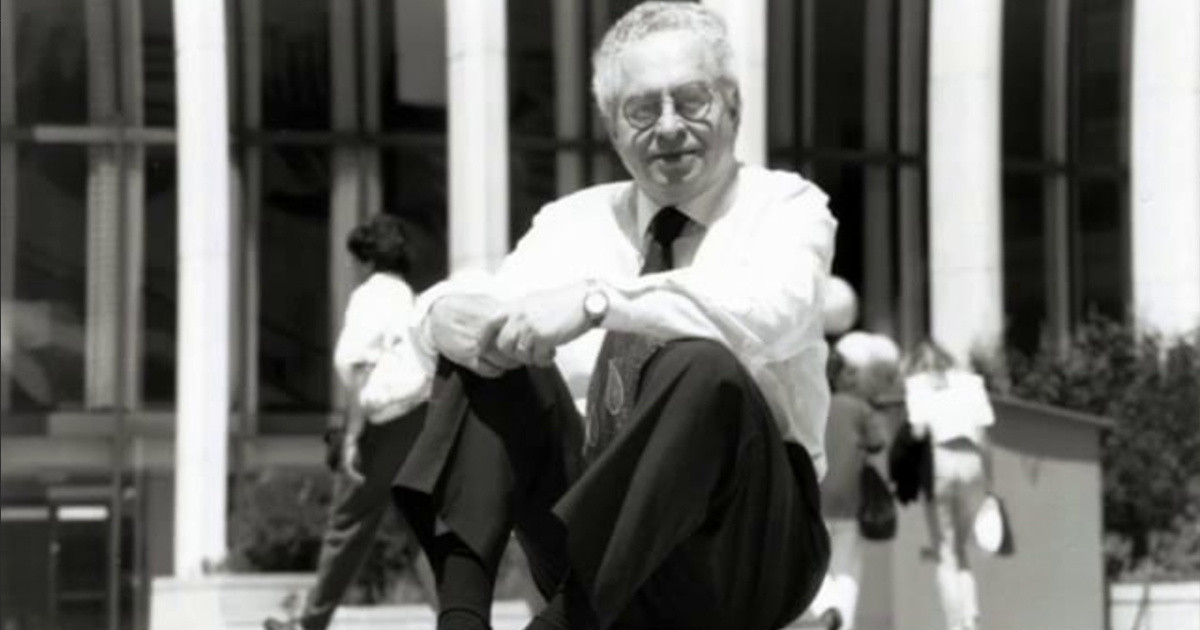 Sam Gesser discusses Folkways Records and Canadian music. Sam Gesser was an influential Montreal producer, writer, and impresario. In the 1950s, he became the first Canadian distributor for the Folkways record label, for whom he produced more than 100 records. He was awarded the Order of Canada in 1993.