Producer Samuel Charters documented what the Mardi Gras Indians sounded like on Mardi Gras Day in 1957 in the Folkways release Music of New Orleans, Vol. 1: Music of the Streets: Music of Mardi Gras. The venerable chants described as “to-wa-bac-a-way”(later known as “Two Way Pocky Way”), “The Indian Race,” and “Red White and Blue Got the Golden Band” were African American folkloric verses that had been sung by Mardi Gras Indians—New Orleans inner-city black men dressed up in American Indian-themed Carnival suits—for at least eighty years at that point. The songs were based on the African diaspora experience and were designed as homage to the American Indians who allied with black slaves in the colonial days. Remarkably, these recordings documented a tradition that was about to change radically as Mardi Gras Indian music transformed into part of mainstream popular culture in New Orleans.

Charters’s recordings captured vocal call-and-response chants accompanied by tambourines and small percussion instruments. The style, Charters conjectured, derived from work songs and evolved into a structure that incorporated “rhythmic elements of the dance.” For at least eighty years since the nineteenth century, the Mardi Gras Indian tribes were located in various black neighborhoods of the city and acted like social clubs. The members would spend all year sewing their elaborate “Indian” costumes, and on Sundays they would assemble for “Indian practice,” where they would rehearse the chants that organized their ritual parades.

By the mid-1960s, when the Civil Rights and Voting Rights acts ended segregation enforced by law in New Orleans, it was no longer illegal for whites and blacks to intermingle. This set the stage for the Mardi Gras Indians to emerge as part of mainstream New Orleans culture. The symbolic moment that signaled this change came in 1970, when a parade of Indians led by chiefs Bo Dollis and Monk Boudreaux led a second line—civilian followers of funeral, Mardi Gras Indian, or brass band parades—through the French Quarter to what is now Armstrong Park to start the first edition of the New Orleans Jazz and Heritage Festival.

That same year Jazz Fest founder Quint Davis took the Wild Magnolias into the studio to make the first commercial Mardi Gras Indian recording, “Handa Wanda.” The song, based on the old chant “Shallow Water Oh Mama,” showed how much the tradition was changing, if only because Dollis based the title on his car, a Honda. But it also introduced the concept of Mardi Gras Indian funk, with an electric R&B band backing the Indians.

Dollis had already been trying out new accompaniment music for Indian chants before the recording. According to Bertrand Butler, a childhood friend of Dollis who went on to become director of the New Orleans Mardi Gras Indian Council, Dollis introduced new instrumentation to the Indians’ music. “The first time I got to really respect Bo, we was on Washington between Freret and South Robertson. They had a bunch of old guys there,” he recalls. “We was all in a bar room where they used to practice, and it was a Sunday. We heard a lot of noise out there coming down the street, and we weren’t used to hearing this type of noise. We were used to hearing tambourines. So somebody comes in and says that it was Bo Dollis comin’ down the street. This wasn’t Mardi Gras; it was a normal practice day, Sunday. And we all came outside, and they were tellin’ him, ‘Hey, you just play the tambourine!’ and Bo Dollis say, ‘Just hit on something.’ This brought something new into the game, and that was the bass drum—boom boom—drawing attention.”

In 1974 the legendary Wild Magnolias album was released, with Dollis, Boudreaux, and other tribe members backed by a non-Indian New Orleans band that included Willie Tee, his brother Earl Turbinton Jr. on saxophone, Snooks Eaglin on guitar, and Alfred “Uganda” Roberts on percussion.

Meanwhile Cyril Neville was learning about Mardi Gras Indian lore by hanging out with his uncle George Landry, a.k.a. Chief Jolly of the Wild Tchoupitoulas.

“Going to different Indian practices I noticed that Uncle Jolly was going to all these different places,” Neville said. “And even though they were singing the same songs, every neighborhood had their own rhythmic texture that they put on it and some other little things they put on it that was different from neighborhood to neighborhood. He listened to all these different little nuances, the same songs but played differently. Most of the songs are about events that happened to a person that really existed. The music is our cultural history. All of them cats was like griots, passing the information down from one generation to the next. This has all become almost a tourist attraction at this point. But the times I’m talking about, it was all a treasure. That’s the way I looked at it.”

Neville later came into his own—along with his three brothers—as part of the Wild Tchoupitoulas, Black Indians backed by the Meters. They recorded an essential album of Indian songs in 1976. He contributed a new classic to the Black Indian canon, “Brother John,” which went on to become a staple for the Neville Brothers.

The Wild Tchoupitoulas never made another album, but the Wild Magnolias went on to make numerous records and become an international touring act, bringing Mardi Gras Indian music all over the world. Dozens of other Black Indian gangs recorded their own albums, and the Mardi Gras Indians became an important feature of the Heritage aspect of Jazz Fest.

When New Orleans was forcibly depopulated in 2005 after Hurricane Katrina, much of its indigenous culture was in peril, as the poorest communities that sustained it were hit the hardest by the flood and had the smallest opportunity to return. Many Mardi Gras Indians were in fact permanently displaced after the flood when their families found better opportunities in the cities they evacuated to; others were incapacitated by the stress of being dislocated. Dollis suffered several strokes after Katrina that eventually led him to retire from his chief’s role and stage performance altogether. He passed away after a long illness In January 2015. Monk Boudreaux, in addition to being chief of the Golden Eagles Mardi Gras Indians, has kept the Wild Magnolias going along with Dollis’s son Gerard; nevertheless, the future of the Mardi Gras Indians as a viable cultural institution was imperiled after Katrina.

“The first thing I thought of after Katrina was what’s going to happen to Mardi Gras and the Indians,” recalls Monk’s manager, Rueben Williams. “I realized it was important for Monk to get replanted in New Orleans, and things would take their own course. But on the first Mardi Gras Day after Katrina, I would see one chief walking by himself towards Dryades [one of the places the Mardi Gras Indians meet]. None of his tribe was back. You kept seeing that over and over.”

Boudreaux, who organizes Mardi Gras Indian performances at the New Orleans Jazz and Heritage Festival, has worked tirelessly on outreach, embracing the well-wishers who are not Indians and welcoming them to march with his tribe on Mardi Gras Day. There are more Indian tribes today, he notes, and more public interest in them, than ever. “It used to be an exclusively black tradition,” Monk says. “But now everybody has caught on, and it’s gotten bigger.” The Indians have really become a popular tourist attraction since Katrina, in part because so much attention was drawn to the plight of their neighborhoods after they were destroyed by the flood. That attention includes the HBO series Treme, which features a Mardi Gras Indian trying to reassemble his gang as one of the main storylines.

In the years since Katrina, Black Indians have returned to parade on Mardi Gras Day, even if they were no longer living in New Orleans.

“On Mardi Gras and Indian Super Sunday [Sunday nearest to Saint Joseph's Day, March 19], we see Indians from all over,” Butler says. “We got Chief Peppy. He’s in Texas, and he gonna come to Mardi Gras. He gonna come to Super Sunday. I know some come down from Nashville. So they may not be here during the year, but they’re still sewing in Texas, they’re still sewing in Mississippi, they’re still sewing in California, because they got that spirit. Even if you’re away from here, you still talk the Mardi Gras talk. You still talk the neighborhood talk: ‘Man if I was here on Mardi Gras Day . . .’ Even in prison if you’re from New Orleans, you be saying, ‘This is what we be doing on Mardi Gras Day.’ That spirit goes all over the world. So the majority of them make it back or try to make it back if they can afford it.”

“The Creole Wild West have classes at Davis Park,” Butler says. “The kids in the neighborhood is just welcome to come there and visualize what it takes to become a Mardi Gras Indian. They might see an Indian on Mardi Gras Day and say, ‘I like that,’ and they say, ‘Come over and see us,’ and they have classes for them. Sometimes we have twenty-five, thirty kids there. Now all these kids probably won’t be able to make it on the street because it takes money to finance making the suits. We help as many as we can. But the next year we try to help those that we couldn’t help. Hopefully we’ll get some financial support so we can help more. At Chief Howard’s house alone we’re talking about they got at least five Indian suits for kids. Somewhere else we got maybe five more from the same gang.”

The Indians who recorded their chants for Music of New Orleans, Vol. 1 might not recognize the shape their tradition has taken, but it has survived against all odds. And like all folk culture, it has adapted to reflect the society that sustains it.

John Swenson has been writing about popular music since 1967. Among his previous books are biographies of Bill Haley, John Lennon, Simon and Garfunkel, and Stevie Wonder, as well as reference works such as The Rolling Stone Jazz Record Guide. In addition, his writing has won three New Orleans Press Club awards and the 2010 Critical award. 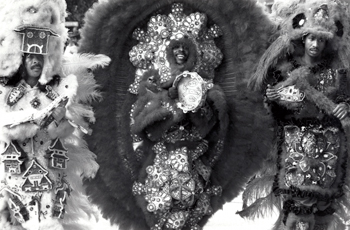 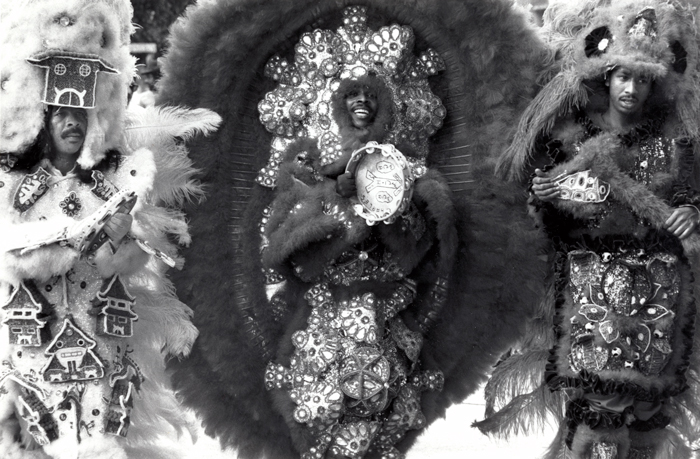 Mardi Gras Indians’ stylized costumes resemble that of Indian warriors, which these New Orleans inner-city black men consider symbols of resistance and domination. Keith Barnes (left) and Charles Taylor (center) of the White Cloud Hunters performed in a Mardi Gras parade in the Louisiana program at the 1985 Festival of American Folklife.
Photo by Nick Spitzer. Courtesy of the Ralph Rinzler Folklife Archives and Collections.

Mardi Gras Indians’ stylized costumes resemble that of Indian warriors, which these New Orleans inner-city black men consider symbols of resistance and domination. Keith Barnes (left) and Charles Taylor (center) of the White Cloud Hunters performed in a Mardi Gras parade in the Louisiana program at the 1985 Festival of American Folklife.

Photo by Nick Spitzer. Courtesy of the Ralph Rinzler Folklife Archives and Collections.

The Neville Brothers’ “Brother John/Iko Iko” appeared courtesy of A&M Records on Crossroads, an album which is no longer in our catalog. 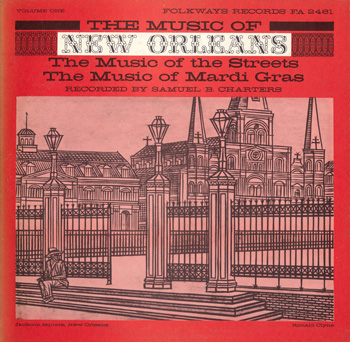 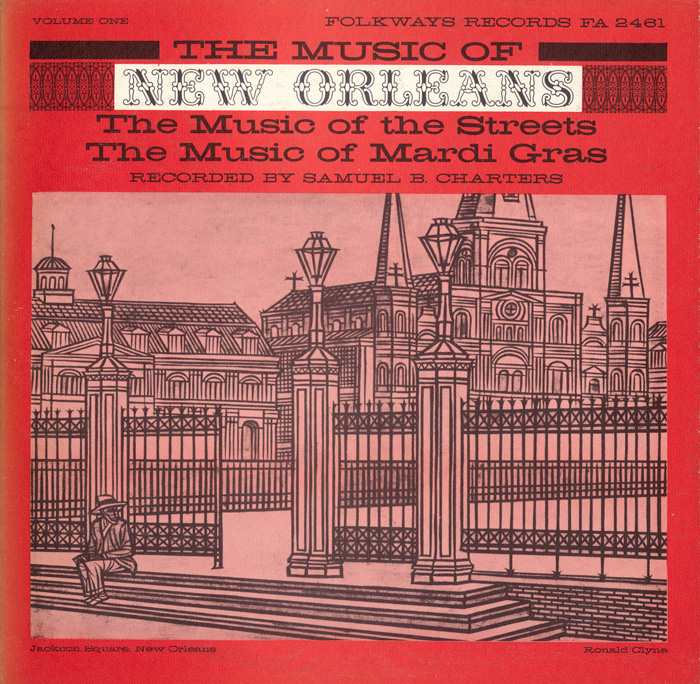 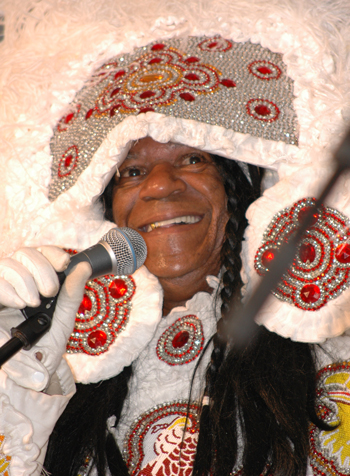 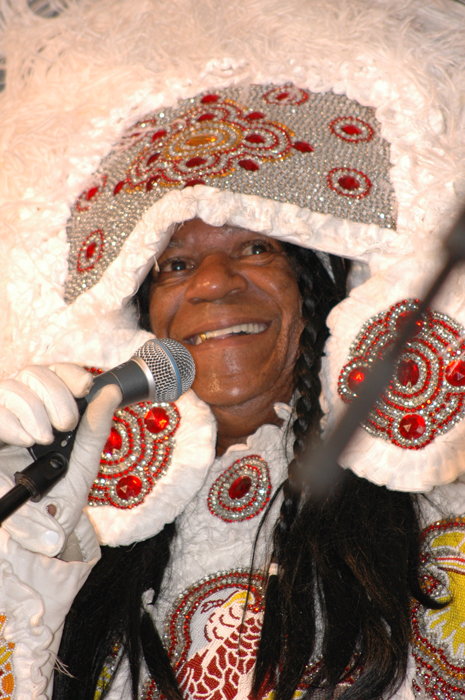 Big Chief Monk Boudreaux performs at the Been in the Storm So Long evening concert at the 2006 Smithsonian Folklife Festival.
Photo by David Hobson. Courtesy of the Ralph Rinzler Folklife Archives and Collections.

Big Chief Monk Boudreaux performs at the Been in the Storm So Long evening concert at the 2006 Smithsonian Folklife Festival.

Photo by David Hobson. Courtesy of the Ralph Rinzler Folklife Archives and Collections.