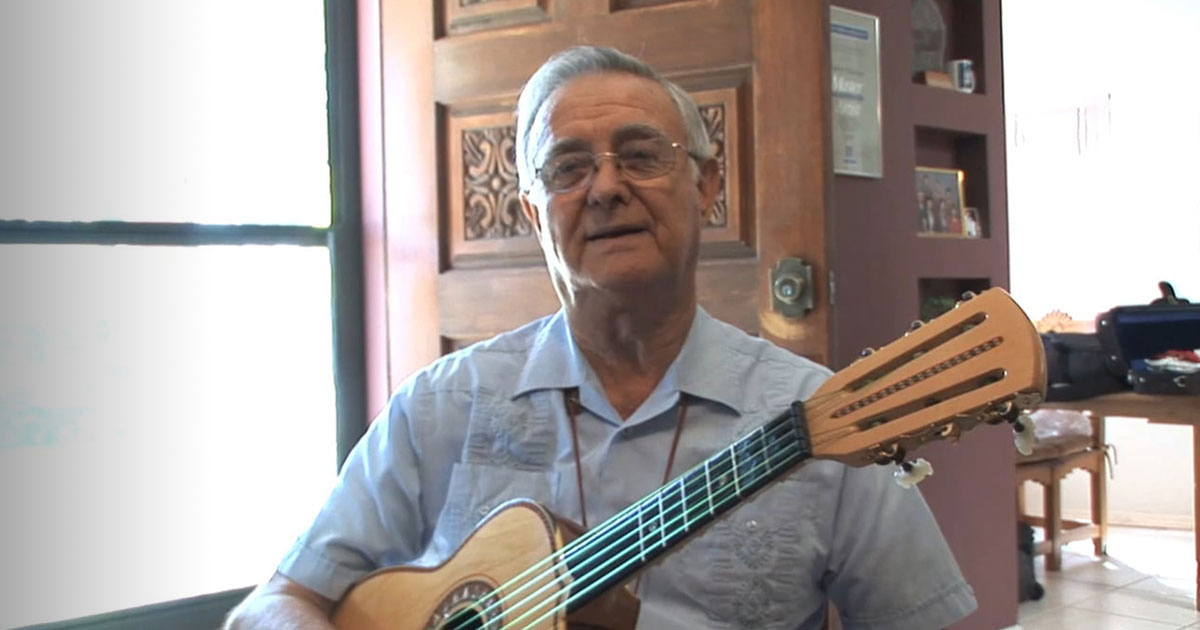 Inspired by the Black Panthers and Latin American revolutionary Ernesto “Che” Guevara, and formed in 1969, Las Gorras Negras (The Black Berets) were a multi-ethnic group that fought for social transformation amidst Civil Rights movements in New Mexico. In 1972, after two of its members, Antonio Córdova and Rito Canales, were mysteriously murdered on the West Mesa of Albuquerque, New Mexico, Roberto Martínez, leader of Nuevo Mexicano mariachi Los Reyes de Alburquerque (The Kings of Albuquerque)[1] and corridista (ballad composer), composed “El Corrido de Córdova y Canales” in order to revise seemingly contrived reports of the incident and to honor the slain Black Berets.

The story of “El Corrido de Córdova y Canales,” however, extends beyond any urgency to counter Albuquerque's official media coverage of the murders. Around the time of the incident, “El Corrido de Cordova y Canales” became a rallying cry against police brutality. New Mexican musicians began to perform Martínez's corrido, which took on a life of its own. Martínez also lost the corrido's text and never recorded the song. Martínez recalls, “I heard it one time at a gallery on South Broadway and I was planning to ask the young lady that sang it to give me the words, but she left and I never got them.” Over twenty years passed and University of New Mexico (UNM) Professor Enrique Lamadrid recovered the lyrics of “El Corrido de Córdova y Canales,” which he returned to his dear friend Roberto Martínez. Like any song that is diffused through the oral tradition, the corrido came back with slight lyrical alterations. Martínez did his best to restore the lyrics to their original form.

In the early 2000s, Professor Lamadrid worked with the Smithsonian Center for Folklife and Cultural Heritage (CFCH) to interview Martínez in regard to his musical family, which spans several generations, and about the story behind “El Corrido de Córdova y Canales.” The interview includes the only recording of “El Corrido de Córdova y Canales” by Roberto Martínez and his family. A few years later, Martínez passed away, leaving a tremendous legacy of New Mexican musical traditions through homegrown mariachi, corridos of struggle, and Nuevo Mexicano violin music, among many other genres.

On the CFCH recording of "El Corrido de Córdova y Canales," Martínez is accompanied by his sons Roberto Jr. and Lorenzo, and he sings in a hoarse voice due to his ailing health. His corrido beckons a classic borderland sound featuring stringed instruments used on both sides of the U.S.-México border: the mariachi vihuela (small five-string guitar), violin, and steel string acoustic guitar. “El Corrido de Córdova y Canales” recalls the style of the historic recording “El Corrido de Gregorio Cortez” by Los Trovadores Regionales,[2] an approach that highlights the vocal depiction of struggle over musical accompaniment.

The corrido is an emblematic musical, poetic, and oral tradition of struggle in Mexican and Chicana/o communities. With the exception of feminist narratives by artists such as the late Jenni Rivera, corridos historically portray male triumphs, trials, and tragedies within the circumstances of social conflict. Corridos of struggle stand in stark contrast to the depiction of glorified violence, wealth, and misogyny found in hyper-commercialized narcocorridos (drug trafficking ballads). Violence certainly enters the storyline in corridos of struggle, but they function as counter-narratives of “official history” in mainstream media and records. The corridos composed by Roberto Martínez portray the stories of New Mexican activists and their fight for social transformation.

Historically aggrieved communities in New Mexico are no strangers to economic, social, and educational injustice. The corridos composed by Martínez, read as local histories of resistance, documenting social conflict in New Mexico, such as the Tierra Amarilla standoff in “El Corrido de Río Arriba” and police brutality in “El Corrido de Córdova y Canales.” In Albuquerque in the 1960s and 1970s, Hispanos,[3] Native Americans, and Black communities faced a considerable amount of harsh discrimination, especially at the hands of local authorities. Professor David Correia of University of New Mexico (UNM) states, “Police killings in Albuquerque are three times what is found in comparably-sized cities and is similar to New York, which has fourteen times the population and a police force thirty-four times larger than APD.”[4] Therefore, the Black Berets, a militant-progressive group of social justice activists monitored the police, specifically for aggression against poor and working-class people.

The Black Berets ran many social service programs for underserved communities in Albuquerque. Their services included a free breakfast program for low-income children, active before the Albuquerque Public Schools had one; distribution of clothing to the poor; a wood cooperative; a "liberation school" for pre-school age children; a dental clinic; and health care at the Bobby García Memorial Clinic, named after the young Chicano activist, UNM student and Beret affiliate who was found murdered outside Albuquerque in 1969.[5] García's murder was the first of many shootings of activists in New Mexico during the 1960s and 1970s.

Roberto Martínez first read about the homicide of Antonio Córdova and Rito Canales through a local newspaper headline that criminalized the two Black Berets. Further investigation by Martínez revealed a different story; Córdova and Canales were targets of a well-devised assassination plan. Martínez wrote “El Corrido de Córdova y Canales” to set the record straight on the story of the slain activists. He recalls, “The news fabricated that they [Córdova and Canales] were caught breaking into a dynamite shed.” According to Martínez, his corrido portrays a more accurate report of the incident:

On the twenty-ninth of January
Early Saturday morning
To the rhythm of fifteen bullets
His blood was spilt.

Córdova was killed first
Canales took off running
That's what officials reported
Even though they were already dying.

The Albuquerque Police Department, New Mexico State Police, and the Bernalillo County Sheriff's Office alleged that Córdova and Canales were attempting to steal dynamite from a roadside construction bunker and resisted arrest.[6] In actuality, the two Black Berets were led into a trap. According to Professor Lamadrid, Córdova and Canales were kidnapped by authorities and taken to a mesa outside Albuquerque. Córdova was shot instantly while Canales attempted to escape and desperately jumped off a cliff, breaking his legs in the process. Even at the sight of Canales' bleak condition, the armed officials shot him nine times to end his life.

After the incident, local newspapers persisted to dehumanize the murdered Black Berets. One journalist harshly reported that no one would care to remember Córdova and Canales. Martínez recalls, “There was an editorial by a journalist or Tribune reporter and he really slammed Córdova and Canales. He said that they were trouble makers and they were criminals and he said that nobody would miss them.” Incensed by such an insensitive claim during a time of mourning, the Albuquerque Hispano community protested to show they were indeed grieving. Martínez depicts this scene of communal resilience in his corrido:

Their friends and relatives
Remember with great sadness
They were left for nine hours
Splayed out in the mesa.

One journalist writes
In a lucid editorial,
"They were only Black Berets.
Who's going to mourn them?”

A group of our people
Went to answer him,
"Here we are, you good-for-nothing,
we are the ones who will cry for them!”

Play, play my guitars
Cry, cry my violins
And remember the tragedy
Of Córdova and Canales.

Over forty years later, the Córdova and Canales case remains open. In 1996, a video released by Tim Chapa revealed himself as an informant who set up the two Black Berets for murder. In 1999, a lawsuit filed by the families of Córdova and Canales against former Albuquerque police officers and governmental entities was unsuccessful.[7] The effort of justice for Antonio Córdova, Rito Canales, and their families continues to be a long battle due to the continuous dismissals of the case by the U.S. District Court in New Mexico.

However, “El Corrido de Córdova y Canales” remains a people's perspective on police brutality. Ironically, the commercial success of violent narcocorridos and the urgency to reveal indignities experienced by international migrants overshadow corridos of struggle that tell Chicano/Mexican American stories. In particular, the corridos composed by Roberto Martínez serve as important musical memories of Chicano-Latino conflicts in the United States.

Roberto Martínez passed away on January 3, 2013. He was the founder and owner of Minority Owned Record Enterprises (M.O.R.E.), [8] a record label inspired by his efforts for Latino Civil Rights since the 1960s. In 1999, he received the New Mexico Governor's Award for Excellence in the Arts. In 2002, Martínez was inducted into the “Corridista Hall of Fame” section for the Smithsonian touring exhibition Corridos sin fronteras / Ballads Without Borders.[9] Along with his son Lorenzo, Martínez was a recipient of the National Endowment for the Arts' National Heritage Fellowship in 2003.

[1] According to Lamadrid, “Founded in 1706 and named in honor of the Viceroy of New Spain, Alburquerque (original spelling) is New Mexico's largest city. After the American Invasion of 1846, its first "r" disappeared from maps and signs. In 1992 Rudolfo Anaya's famous novel, Alburquerque recovered the missing letter. After 1992, Los Reyes proudly added the "r" as a demonstration of cultural pride and recovery. New Mexican is an adjective that translated into the Spanish Nuevo Mexicano, refers more specifically to the state's Hispano/Latino/Mexicano/Chicano people and their culture.” Lamadrid, Enrique. 2010. “El Rey de Alburquerque: Roberto Martínez and his New Mexican Mariachi: A Transnational Legacy”

[2] A recording of “El Corrido de Gregorio Cortez” is available on the Smithsonian Folkways compilation Borderlands: From Conjunto to Chicken Scratch (SFW 40418).

[3] “Hispano” is the common term of identity for Mexican Americans in New Mexico.

[5] Patterson, Kent. 2012. “Remembering the Black Berets and the Struggle for La Raza in New Mexico.” The Cutting Edge, October 10th

[8] Acquired by the Smithsonian Institution on September 7, 2007.

Alexandro D. Hernández is a doctoral candidate in ethnomusicology at the University of California, Los Angeles. He is currently a predoctoral fellow at the Smithsonian Center for Folklife and Cultural Heritage. Hernández is also a social justice activist-musician who works on original music via rock band ¡Aparato!, film, and theater and is highly dedicated to the son jarocho.