Further acquaintance with Afghanistan’s music will serve to increase our understanding about the culture of a land that in these times is featured daily in our print and broadcast media. We have heard of the fierce local resistance to invaders since Alexander the Great in 330 BC and Genghis Khan in the 13th century (both of them conquered the region), all the way through the more recent and ultimately unsuccessful incursion by The Soviet Union (1979–1989). How the American war that began in 2001 ends, history will tell.

But to set the stage for listening to the music, a quick rundown of a few more key facts will help.

Zoroastrianism, then Buddhism held sway there (ca. 500 BC and ca. 100 BC, respectively) until Islam arrived in the decade before 650 AD. A Sunni empire (the Ghaznavids) arose in the 10th century and countered the eastward spread of Shia Islam from Iran. Even today Afghanistan is predominantly Sunni, though a significant minority follows the Shia path. In 1747 a successful military commander of Pashtun origin named Ahmed Shah Durrani founded a monarchy which after a few years of militant expansion encompassed much of today’s Afghanistan?though the borders were not finalized until 1895, when Great Britain and Russia agreed to keep Afghanistan as a buffer zone between their imperial domains of influence. Today, Pashtuns comprise half of the Afghan population and hold the reins of political power.

Afghanistan’s multiethnic cultural landscape is complex. A crossroads of East-West and North-South trade routes, its western neighbor is Iran; to the south lie Pakistan and India; Turkmenistan, Uzbekistan, and Tajikistan, three former Soviet Socialist Republics, mark the frontier to the north; and via the long finger of the Wakhan Corridor it shares an eastern border with China.

Afghanistan was profoundly influenced by Persian and Indian cultures over many centuries. While the official national languages today are Dari (a dialect of Persian) and Pashto, a bit over a century ago Hindi was important as well.

Musically, in fact, Afghanistan is especially interesting as a meeting place of Persian and North Indian classical music traditions. Experts and aficionados familiar with the music of one or the other of those regions’ music tradition may claim that Afghan music is primarily Persian or Indian, but the reality is more complicated.

In the 19th century, Pashtun (the British in India called them Pathans) rulers emulated their Indian neighbors and brought North Indian classical music to the Afghan court. However, in the Pashtun royal courts of Afghanistan for more than a hundred years earlier, until around the 1860s, Persian music was held in the highest esteem. Listen to excerpts from the Iranian "Mahur" and from Iran’s border with Afghanistan, "Allah Madad," for a hint of how that music might have sounded.

The flavor of northern Afghan music is seasoned by its Uzbek and Tajik minorities and the influences from neighboring states carrying those names, and it is readily heard as different from Persian music, for example in "Tarona" and "Nawroz-i Sabo" from Music of Central Asia Vol. 2: Invisible Face of the Beloved: Classical Music of the Tajiks and Uzbeks.

The influence of Radio-Kaboul as a unifying force in the development of the modern Afghan nation and sense of nationhood cannot be overemphasized. First established in 1925 and now operating as part of Radio Television Afghanistan, it had a limited broadcast range until it expanded dramatically during the 1940s. Since around 1960, the station has broadcast music from every corner of the land, and recorded almost everything aired for its own archive.

The first female vocalist to appear live on radio in Afghanistan was Parwin in 1951; listen to "Spring Is Here". In instrumental music, the distinctive and preeminent Pashtun instrument is a short-necked, plucked lute called a rubab (sometimes rabab or rebab). Rubab virtuoso and composer Ustad Mohammad (Mohamed, Mohammed) Omar also appears on the aforementioned album, Music of Afghanistan(1961). He was on the staff of Radio-Kaboul for many years, and eventually became the director of the National Orchestra of Radio Afghanistan. In 1974 he came to the U.S. on a Fulbright-Hays fellowship to teach for the University of Washington’s ethnomusicology program in Seattle. Late that year he played a memorable concert, accompanied by a young tabla player named Zakir Hussain. That concert was published a few months after the 2001 American-assisted overthrow of the Taliban as Ustad Mohammad Omar: Virtuoso from Afghanistan(2002). Peter ten Hoopen’s Teahouse Music of Afghanistan (1977) features other musicians of the Radio Afghanistan orchestra, including young Farida Mahwash, "Come to Me in the Morning," now an Ustad and a global star in her own right.

When the Taliban rose to power in the mid-1990s, it was reported that they took over the station in Kabul, renamed it Shariat Ghagh (“Voice of Islamic Law”), and ordered the archive destroyed. But when Radio Afghanistan audio archivists Abdul Jamil Wardak and Abdul Wahed Popal visited Smithsonian Folkways in 2009, they related what actually happened. They had been tipped off that the Taliban were coming to the station and feared for the safety of the collection, so they hid it away, substituting for the actual tapes blank and damaged ones, expecting them to be smashed and burned. But when the Taliban arrived, brandishing their guns, what they wanted was to have their own chants and songs broadcast. The archive remains whole, though stored in less than ideal circumstances.

One of the sad effects of war is to destroy the fabric of everyday life, of many people’s homes and their livelihoods. Afghanistan has seen continuous war for more than thirty years now. A young rubab virtuoso born and raised in Kabul, Homayun Sakhi and his family moved to Peshawar, Pakistan, in 1992, during the chaotic years following the Russian retreat. While many Afghans returned after the Americans overthrew the Taliban, Homayun Sakhi moved to the U.S. and settled in Fremont, CA.

Music of Central Asia Vol. 3: Homayun Sakhi: The Art of the Afghan Rubâb

More recently, this superb Afghan composer and instrumentalist has attempted to make a musical map expressing the character of each region of his native land in the original composition “Rangin Kaman” for rubab and string quartet; the composition occupies the first 28:58 of the collaborative album Music of Central Asia Vol. 8: Rainbow, made with Kronos Quartet. Of this work, Kronos’ David Harrington said, “We have a wonderful opportunity…to make the world (of music) whole in this moment in time.”

Perhaps having listened to several aspects of Afghan music, we will turn to today’s and tomorrow’s news with better appreciation for the subtleties and complexities of the search for a lasting Afghan peace.

Over the years of my acquaintance with Afghan music, I have returned again and again to the writings of John Baily, Theodore Levin, Lorraine Hiromi Sakata, and Mark Slobin. For further reading, listening and watching:

Baily, John. 2001. "Can you stop the birds singing?" ? The censorship of music in Afghanistan. Copenhagen: Freemuse.

D. A. Sonneborn is an ethnomusicologist, and associate director of Smithsonian Folkways Recordings.

Homayun Sakhi
Homayun Sakhi is the outstanding Afghan rubâb player of his generation, a brilliant virtuoso endowed with a charismatic musical presence and personality. During Afghanistan’s long years of armed conflict, when music was heavily controlled, censored, repressed, and, finally, totally banned, the classical rubâb style to which Homayun has devoted his career not only survived but reached new creative heights. Produced in collaboration with the Aga Khan Music Initiative, a program of the Aga Khan Trust for Culture. 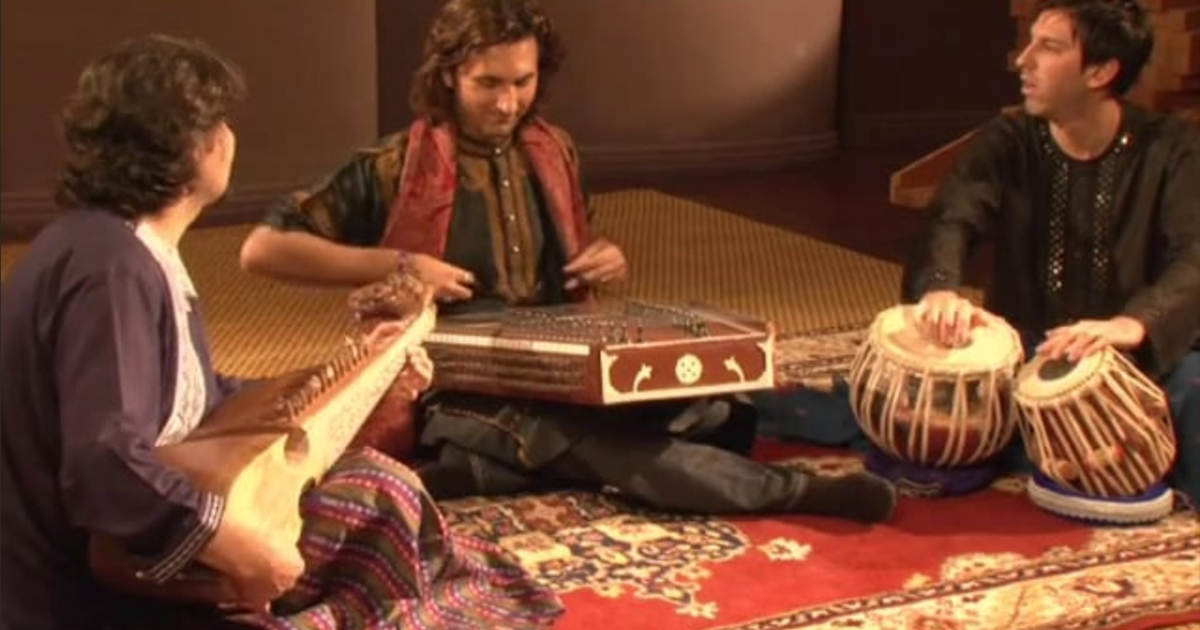 Making of the album “In the Footsteps of Babur”
In 1858 with the abdication of Emperor Bahadur II and the establishment of the British Raj, Afghanistan became a buffer zone between the Russian and British Empire. Following the rise of Soviet power in Central Asia in the 1920s, the once porous border between Central Asia and the Subcontinent hardened. In a modern day encore of the Mughal artistic synthesis, six cosmopolitan-minded musicians from Central Asia, Afghanistan, Northern India, were brought together by the Aga Khan Music Initiative with the aim of merging their musical instruments and traditions to create new sounds. One of them is the famous santur player from Mumbai, Rahul Sharma. In the spirit of today’s musically globalized world, they met in northern California, where Afghan rubâb player Homayun Sakhi currently makes his home, and in Paris, where the commodious Studios Babel, true to its name, offered an ideal environment for a multicultural recording project. 10 Tracks, 65 Minutes, 41-page Booklet. Music of Central Asia is a co-production of the Aga Khan Music Initiative in Central Asia, a program of the Aga Khan Trust for Culture, and Smithsonian Folkways Recordings. The aim of the series is to present leading exponents of Central Asia’s rich and diverse musical heritage to listeners outside the region.