Do people still use work songs? Where, and how?

How do people from around the world draw the line between work and play?

Through testimonies of the farmers themselves, I endeavor to understand how the Sukuma people of Northwest Tanzania perceive and experience musical labor as neither exclusively music performance nor strict labor, neither work nor play, but a performed behavior retaining aspects of both.

For little more than two months, just after the onset of the first rains that routinely fall from late November to early February, the everyday rural soundscape of the Sukuma region is transformed from a state of stillness and tranquility to one of boisterous, noisy cacophony. For as far as the ear can hear, the rambunctious shouts and songs of farmers meld with the thud and clang of their hoes striking the earth in rhythmic unison. Occasionally, the farmers act on cue and abandon their work all together. One by one or in groups of twos and threes, they throw their hoes into the air and catch them, or they twirl them swiftly to the accompanying drum in choreographed unison over their heads, through their legs, and around their chests and waists.

As a visitor, it would be difficult to avoid the field performance produced by these cotton farmers’ associations. The farmers begin their treks to the fields as early as five o’clock in the morning in order to take full advantage of the midday sun. The totality of these music experiences at the labor site is key. The compelling production of songs laden with creative metaphors and evocative allusions to local realities past and present give the participants a rewarding aesthetic experience. The workers’ achieve a feeling of euphoria and joy, resulting from having “performed” labor for long durations and the consequent intense physicality, combined with being in a community that is synchronized to, and surrounded by, call-and-response choruses and repetitive drum rhythms enhanced with variations.

The concept of “work song” has captured the imagination of scholars from many intellectual quarters over the years. Friedrich Engels claimed that culture itself, to include language and music, originated in labor. German musicologist Karl Bücher asserted that as human hands became more finely articulated, so did the vocal organs, until consciousness seized on these reflex actions and elaborated them into a socially recognized system of communication. Anthropologist E. E. Evans-Pritchard first investigated work song in a functionalist light. Writing about the Dinka people of the Sudan, he reasoned that “the freedom to chant obscenities made manual labor appealing to men, and hence, the relaxation of restrictions helped to get laborious tasks done.” In American labor folklore scholarship, Norm Cohen defines “labor song” as a subcategory of “occupational song,” with “work song” used only for identifying an item actually sung during work.

In a 2001 article about Sukuma music in Tanzania, I coined the term “musical labor” to draw attention to the context and processes of activities surrounding labor activity where music is present (to include composition, performance, and transmission). In the Sukuma musical labor environment, coordinated, repetitive rhythmic labor movements contribute to group solidarity, avoid accidents, and accomplish the work in a timely manner.

Farm labor is inherently dependent on the yearly rhythm of the agricultural cycle. During the rainy season, farm labor goes on from dawn until late afternoon, thus the time for creative activity or recreation is found within the working hours. When farmer composers are not planting or harvesting, they are relaxing, composing songs, and competing. Labor practice and song culture extend into the leisure time forum of post-harvest dance competitions, where the farmers’ labor groups compete for prizes of cattle as well as for prestige. The pageantry, spectacle, and scandalous behavior of singers in these dance competitions draw potential recruits and future employers toward the side of the winning group.

At the labor site, the group leader, known as a niingi, assesses the temporal flow of the labor, the nature of the specific task being accomplished, as well as the mood, vitality, and verbal and unspoken cues necessary to push the workers along. The leader determines whether song phrases are expanded or contracted. They also decide the ordering of verses and choruses within the song—whether they are repeated once, twice, or innumerable times over several hours. The leader determines whether the song remains constant in speed or is sped up or slowed down, whether a song’s performance is random, fixed, or makes references to other songs, and whether a song contains a limited or wide range of improvisational play. Furthermore, the leader determines whether the songs sung are trivial, frivolous, topical, personal, contemporary, ancient, political, deeply profound, or all of the above. Song topics range thus from scolding lazy farmers and praising local and national leaders to taking on broader socioeconomic concerns.

In Sukuma culture, the primary function of musical labor is to make the work easier, or as one labor group member I interviewed put it, to “easify” the work. Music accomplishes this task in the several ways, which I have outlined here, as the following Sukuma farmer testimonies bear out.

“This music helps youth to work, so they are not just hanging around. Every individual gets the desire to farm, to do his part.”

“When the music is there, one can finish four hectares, but if there is no music, I will not farm, hardly at all.”

“Without the music you just get tired, it is as if you are being tortured.”

“We work from six in the morning till noon, three times a week. We work for more than an hour at a time without resting, and it is music that helps us get used to the work.”

“After working to music for some time, the person will not feel the weight of his hoe, nor will he feel how hard the earth is. He will just continue working, until the song is worn out. He will feel tired then, until another song is there for him, then the work will continue!”

“Music lulls the farmer’s consciousness like rainwater. It calms the thoughts of young people who have a lot of wild energy at the farm site, more than is needed for the labor itself.”

“When we are playing this music in the fields, we do not have a lot of other thoughts running through our heads. All our thoughts stop right there, and we are concerned with the work at hand, and the manner in which the music is playing.”

“Music is as necessary to the Sukuma farmer as eating. Music gathers and focuses our joy and greatly benefits us.”

“When you hear the crying of the drums, the heart knows only joy. You just go on farming, forgetting your worries. You sing without doubt or fear.”

“The person who sings during work has no heavy thoughts; he thinks only good and pleasant ones.”

“Music gets into your head and mixes up and just makes you farm quickly and with joy. Just to listen to its beat—piga! piga! piga! You go along working with joy.”

“Music effects farmers the way a raise in pay effects office workers; it effects the mind in the same way; it lightens the load, eases the mind.”

“Songs praise the hard workers. People feel proud to be the subjects of these songs and work even harder.”

“If you are feeling pain, if you are missing a wife, you can sing about that. Singing about these things can lift your heart.”

The Sukuma people believe that all song and dance originated in work-related music. This belief reinforces attitudes about music and work in general and shapes practice. Musical labor serves as a model for how one should think and act about local historical events, creativity and cosmological understanding, heroism, individuality, and the development and maintenance of a work ethic. Labor, together with drumming and raucous singing, contributes to making the labor seem informal, festive, and fun. Working together with music becomes more than only a technical means of finishing agricultural tasks; it plays a critical role in establishing closeness, mutual support, community solidarity, and what it means to be Sukuma.

Frank Gunderson is associate professor of ethnomusicology at Florida State University and has conducted extensive fieldwork in East Africa. His most recent book, Sukuma Labor Songs from Western Tanzania: We Never Sleep, We Dream of Farming (Brill Academic Press, 2010), was the 2009–2011 winner of the Kwabena Nketia Book Award for best monograph on African music.

Evans-Pritchard, E. E. “Some Collective Expressions of Obscenity in Africa.” The Journal of the Royal Anthropological Institute of Great Britain and Ireland 59 (July–December 1929): 311–331. 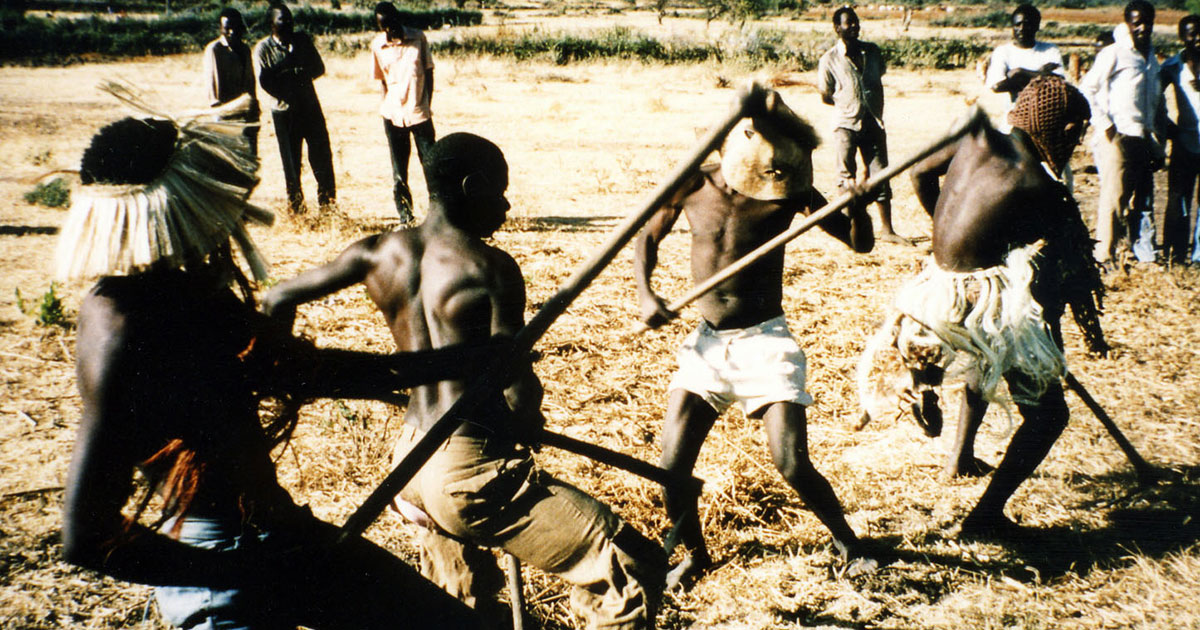 Video: The farmers of the Banunguli farming group from Kisessa village near Mwanza, Tanzania, build tie ridges—raised earthen mounds into which the cotton seeds are planted. The accompanying kadete (one-string fiddle) player regulates the pace of the workers and spurs them on with his sung words of encouragement. Recorded in January 1995 by Frank Gunderson.

The Bapachanga farming group sings a cotton weeding song. This is a neighborhood mutual assistance farming group, made up of men, women, and youth. In February and March, just before the second rains of the season, the groups go out to weed (and sing) at each other’s farms, prior to harvest.

Nene Nandikwa na Mwinyi (I Was Responded to by Mwinyi)