...Often you go to the shelf and get your Bible,
And sit down and begin to read.
And you find therein where God will punish
The rich man for every unjust deed.

Be of good cheer; be patient; be faithful,
And help the union to grow strong.
And if at any time you become the least discouraged,
Revive yourself by singing the good old union song.

When thinking of how horrid the past has been,
And know the labor road hasn’t been smooth.
Deep down in your heart you keep singing:
“We shall not, we shall not be moved!”

In 1985, Pete Seeger introduced me to one of his long-time idols: John Handcox, an African American singer, poet, and union organizer. Pete had first heard John’s songs and poems recorded for a New Deal resettlement project led by Pete’s father, Charles and later deposited at the Library of Congress’s American Folklife Center. As Pete tells in his preface to my new book about the life and music of John Handcox, “I was bowled over by the songs and poems, and started immediately memorizing some of them and repeating them for friends.”2 Pete traveled the South to find more such songs, but by this time, John had already lit out to avoid the wrath of Arkansas plantation owners. They “had the rope and the limb, all they needed was me,” John later quipped. But, as he had often done for others, Pete carried John’s music into immortality. In 1940, Woody Guthrie, Alan Lomax, and Pete collected John’s songs and poems into their legendary Depression-Era songbook, Hard-Hitting Songs for Hard-Hit People. The manuscript got lost and did not get published until 1967. As far as Pete knew, John had died, but his songs and poems lived on, published by and, as often as not, sung by Pete.

John had disappeared during the great Black Migration out of the South and landed in San Diego. In 1982, he contacted labor songster Joe Glazer, who alerted Pete and Ralph Rinzler. In 1985, they brought John to a gathering of labor folk musicians at the AFL-CIO’s George Meany Center for Labor Studies in Silver Spring, Maryland. I was one of those songsters, and Ralph insisted that I interview John. Thus began my many years of researching his story and collecting his songs and poems and now making them available in a book and online.

Pete Seeger introduced me to John Handcox by explaining that John was one of the twentieth century’s most important folk musicians: a true original who wrote new songs based on his experiences but also drew on the black freedom movement and replenished traditional folk songs. John developed his musical and poetic sensibilities as a black man growing up in the segregated South. His music falls into the folk tradition of Woody Guthrie, Huddie Ledbetter (Lead Belly), Bob Dylan, and others who traded on tunes and phrases well known and easily sung in a verse or chorus. John’s songs and poems inspired Southern labor and civil rights movements in the 1930s, long before those movements came of age. His works stand the test of time, and his story deserves to be widely known.

Born in Brinkley, Arkansas, in 1904, John came into the world at one of the worst times and most dangerous places to be black in America. He grew up fifty miles from the site of the Elaine Massacre, where whites murdered scores and perhaps hundreds of African Americans for trying to organize a union in 1919. The progeny of African American slaves, white slave owners, and Native Americans, Handcox learned how to add and subtract in his head and to challenge the phony charge accounts of white merchants. He learned how to read and rhyme by studying a book by the famous black poet Paul Laurence Dunbar, given to John by his father George. John drew on church tunes and his grandfather’s stories about slavery to sing out his people’s traditions of struggle. Woody Guthrie inscribed “all you can write about is what you see,” on the bottom of his first draft of “This Land Is Your Land.” John did exactly that, describing in searing detail the oppression of black and white sharecroppers alike.

John told his story as he lived it. He began picking cotton at age six, along with his ten brothers and sisters. His family’s fortunes crashed after John’s father was thrown from a buckboard by a runaway mule and broke his neck in 1923. The collapse of cotton prices and the iron grip of the plantation oligarchy dragged his family into the vortex of dispossession. John ended up as a sharecropper trapped by racism and debt peonage, as selfish planters mechanized cotton production and engrossed the land, forcing some 900,000 sharecroppers and tenants to quit their land during the Great Depression. Many moved to Memphis, Chicago, and beyond. Others stayed behind in dire poverty.

In 1934, in the midst of this chaos, Socialist Party leaders and a small group of black and white sharecroppers, tenants, and day laborers defied generations of white supremacy in Ku Klux Klan country by organizing the Southern Tenant Farmers’ Union (STFU). Whites made up the majority of sharecroppers, but blacks made up the majority of union members. Founders of the union all agreed that they could not succeed unless they joined together in violation of the laws and practices of segregation. They addressed each other as “Mr.” and “Mrs.,” held unsegregated interracial conventions and mass meetings, and organized a successful strike of cotton pickers in 1935, prompting upwards of 30,000 people to join the union.

In 1936, planters unleashed a reign of terror, beating and murdering union members throughout the eastern Arkansas Delta where John and his family lived. The union crusaded for civil liberties and, as in later civil rights struggles, songs became a crucial part of its appeal, thanks in large part to John Handcox. He published his songs and poems in the union’s newspaper, The Sharecropper’s Voice, under the pen name of John Henry, the great steel-driving man of legend.

His “oral poetry” appealed to semi-literate rural blacks and whites who passed on stories and ideas through recitation. “The Planter and the Sharecropper” is perhaps the best example of how John weaponized words. When I met him fifty years later, John could still recite it from memory.

A lynch mob quickly cut short John’s time as a song leader and union organizer, while violence and internal conflicts crushed the union. However, Pete carried on. He frequently sang John’s “Raggedy, Raggedy,” which, Pete reminded me, came somewhat ironically from a religious tune, “How Beautiful Heaven Can Be.” When Pete, Woody, and others took the stage as the Almanac Singers before union audiences in 1940–41, they often performed John’s song “Roll the Union On,” created in collaboration with Lee Hays and the radical Southern preacher Claude Williams. Pete said it was the perfect song for marching, hand clapping, and foot stomping with ribald union audiences. The STFU theme song, “We Shall Not Be Moved,” became an anthem for both the labor and civil rights movements.

Although less well known, John’s song “Join the Union Tonight,” to the tune of “Raise a Ruckus Tonight,” expressed the courageous optimism of union organizers. His “Mean Things Happening in This Land” chronicled the stark repression used to kill those organizers and their unions in the South.

I had learned all of these songs in 1970 by reading Hard-Hitting Songs for Hard-Hit People. When John appeared at our labor song gathering in 1985, we leapt to our feet to join him in singing “Roll the Union On.”

Audio
“Roll the Union On” by John Handcox

Many of his songs were instantly recognized, thanks to the work Pete had done. Now in his eighties, John began a new career as a living legend, much like some of the Deep South blues men who had reappeared in the 1960s after years of obscurity. John and Pete joined together at the Clearwater Festival, at the Vancouver Folk Music Festival, and at the Western Workers Heritage Festival in San Francisco. In the Reagan Era of union-busting and hard times, John’s “Mean Things Happening in This Land” struck a chord with new audiences. John was honored with the Joe Hill Award of the Labor Heritage Foundation in Washington, D.C., and feted as a labor and civil rights icon in his hometown of San Diego.

Remembering the story, songs, and poems of John Handcox would not be complete, finally, without recognizing that his wells of creativity continued to bubble forth. He and I collaborated on several songs. At the Labor Heritage Foundation’s labor folk festival in 1986, we sang his rocking “Jobless in the USA” and poignant “Hard to Say Goodbye.” I sing it now when I think of my loved ones who have passed on and, of course, whenever I think of either John Handcox or Pete Seeger. This summer, it is indeed “hard to say goodbye” to our folk music legends.

“The first time I heard about the union”

“A poem about the strike in Arkansas” 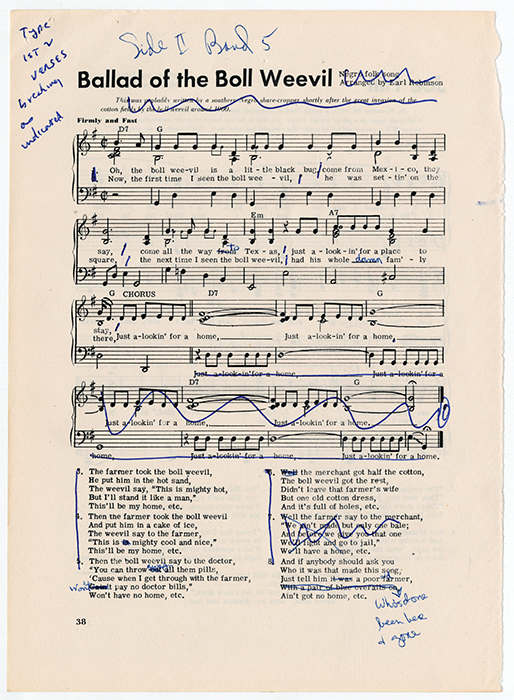 Archival image from the production file for Sing Out!: Hootenanny with Pete Seeger and the Hooteneers (1963).
Courtesy of the Ralph Rinzler Folklife Archives and Collections.

Archival image from the production file for Sing Out!: Hootenanny with Pete Seeger and the Hooteneers (1963). Courtesy of the Ralph Rinzler Folklife Archives and Collections.

The cotton boll weevil’s larvae ruin cotton crops and have been a source of despair for cotton farmers. There are hundreds of verses sung to the basic melody of this song. Woody Guthrie even adapted the lyrics into a farmer’s lament for his financial problems during the Great Depression. 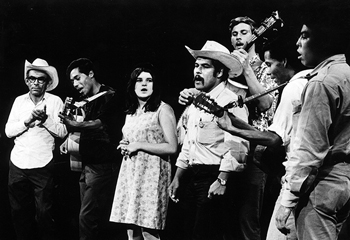 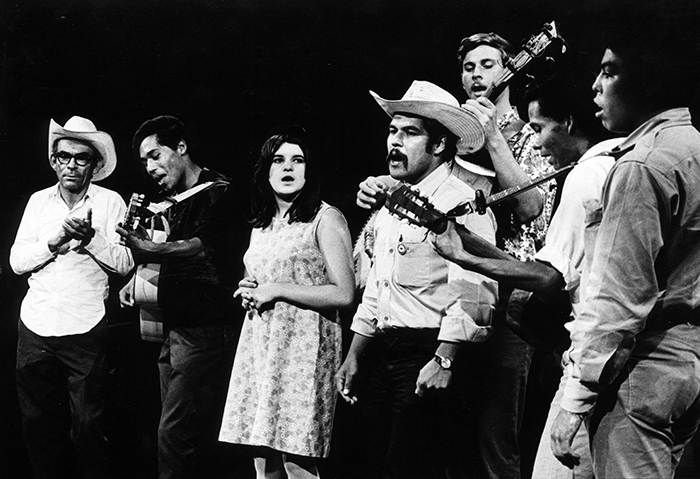 An anthem of the farm workers’ movement, “De Colores” has been sung at United Farm Workers (UFW) events since the inception of the union, which was for many years led by Cesar Chavez. 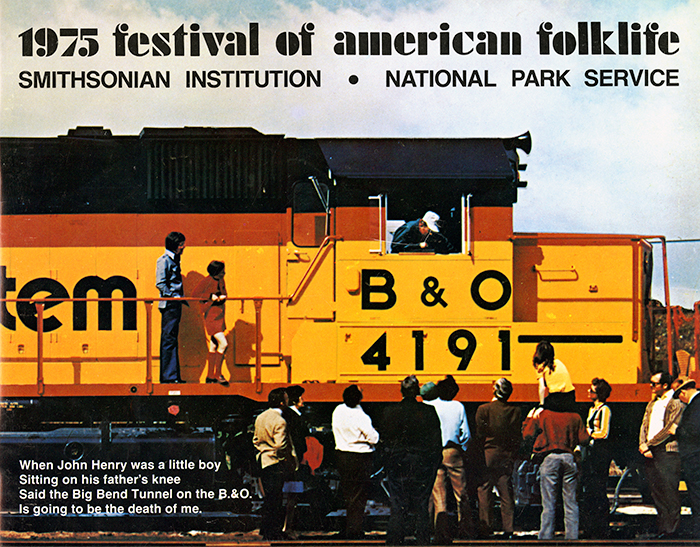 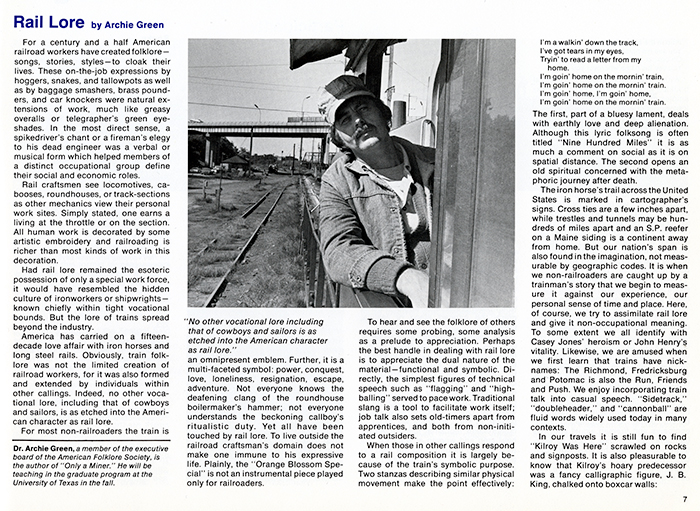 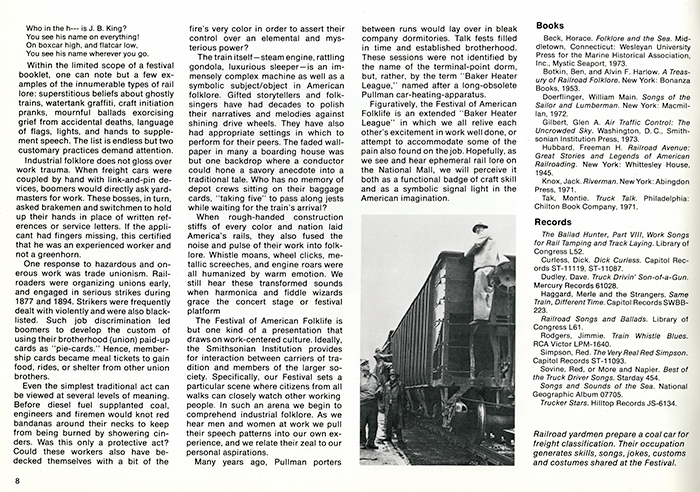 To some extent we all identify with Casey Jones’ heroism or John Henry’s vitality. Likewise, we are amused when we first learn that trains have nicknames: The Richmond, Fredericksburg and Potomac is also the Run, Friends and Push.

—From “Rail Lore” by labor scholar Archie Green, published in the program book of the 1975 Festival of American Folklife. Download article.