A People in Flight: African Americans in Movement 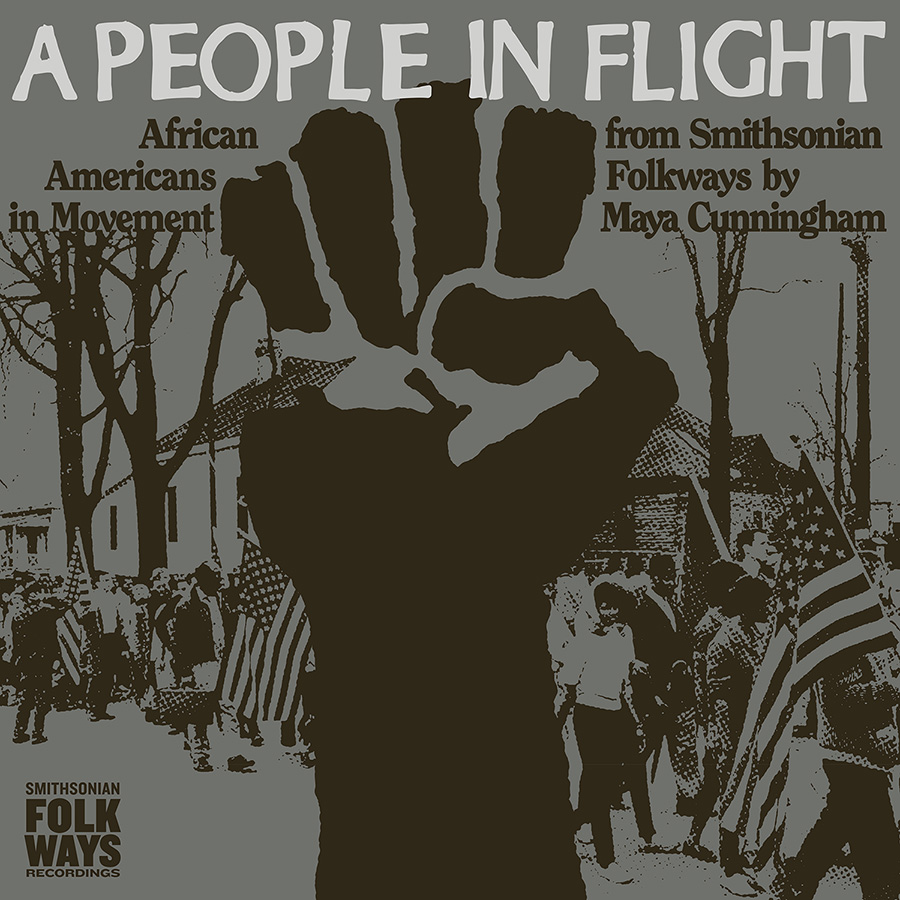 Written and compiled by Maya Cunningham

African Americans have historically been a people in motion. The Africans who arrived in the thirteen colonies were forced to leave their homes in various African kingdoms and empires, where they were citizens, to become non-citizens in the chattel slavery of the United States. Before and after emancipation, some African Americans emigrated back to the African continent, to Liberia, and other countries. The Great Migration of the early 1900s marked another major demographic shift of African America, when millions of Black Americans moved from The South to Northern and Western cities. Most recently, thousands of African Americans pilgrimaged to Ghana in 2019, invited by the country’s “Year of Return” commemoration of the 400-year anniversary of the first Africans enslaved in the Virginia colony in 1619. This historical motion has either provoked or been driven by African Americans' response to anti-Black racism, social injustice, slavery and colonialism. Social movement ideologies, physical relocation and bodily protests have been historically entwined. After all, enslavement was about forced relocation and captivity. Black people resisted by insisting on freedom that moved them to physically protest through escape and other surreptitious activity. This pattern continues throughout Black history. Movement and motion, a remapping of African America in geographical and mental spaces. A people in flight. This 2022 Smithsonian Black History Playlist uses music, poetry, interviews and archival footage to show the relationship between the migration and the ideological and social movements of Black America. It is divided into four sections - Flying From, Flying In, Flying Free and Flying Home - that capture the group’s movements for freedom.

Martin Delaney was an African American activist, journalist, writer and comrade of Frederick Douglass. He was a major force in the nineteenth century Abolitionist Movement. Delaney’s grandparents, mother and father were Mandinka, from the Gambia, and his grandmother inspired his strong African identity and Black pride by telling him thrilling stories of the great Mali Empire. Delaney’s abolitionist activism and Mandinka heritage encapsulate the earliest movement of African America - the flight from the African homeland, where Black history begins, and the fight for freedom from slavery. Like Delaney, twenty four percent of Africans who came into the United States were from the Senegambia region of West Africa. Twenty-four percent came from West Central Africa, twenty four percent from Southeastern Nigeria, around fifteen percent from Sierra Leone, just under fifteen percent from the Gold Coast (Ghana), and smaller ratios from Mozambique and Madagascar. Like Delaney, a Black nationalist who saw African America as a nation within a nation, those held captive in the United States often held on to their connections to the kingdoms, empires and polities that were their former homes. They commemorated allegiances to the Kingdom of Kongo through pageantry, to the Mali empire by naming towns they founded Timbuktu, and through language and customs. In many cases, the attachment to the African homeland is the identity force that fostered resistance to enslavement. Forced migration from African polities, the Abolitionist Movement, and the escapes of over one hundred thousand African Americans through the Underground Railroad were the first movements in African American history. This section, Flying Home, elucidates the Black American flight from the African continent through the music traditions that originated from the Kingdom of Kongo, and in the thirteenth century Mali Empire that were a part of Martin Delaney’s Mandinka heritage. Also included are the stories of Delaney’s fellow abolitionists like Frederick Douglass, Sojourner Truth, and Harriet Tubman, who facilitated their own escapes, and facilitated freedom for others. Frederick Douglass also tells of the 180,000 thousand Black soldiers who fought for the Union Army in the Civil War. Most of these soldiers escaped from slavery, and their warcraft turned the tide of the Civil War to victory.

As different African ethnic groups reconstituted into a more unified intra-ethnic African America, the earliest forms of resistance to oppression formed through cultural practices. Early African Americans developed a cultural ‘way of being’ that consistently involved an internal, secret world where they thrived, from which came coded communications in the public sphere that only those in the know could understand, and a kind of masking when interacting with those who upheld the slavery system. ‘Flying In’ to the closed cultural world was crucial to surviving slavery. In early African America, flying inward frequently meant surreptitiously and temporarily relocating to secret meetings often held in the woods called hush arbors, which were ubiquitous all over the South. During hush arbor meetings, Black folks engaged in their own form of Christianity that focused on liberation in the present and the hereafter. Prayer, singing and preaching were prominent activities that inspired the palpable hope that helped them continue on in the brutal confines of slavery. The strong religious beliefs fostered through hush arbor meetings facilitated in many African Americans the faith to escape, as exemplified in the abolitionist activism of Harriet Tubman. African American spirituals, the sorrow songs and jubilees, as well as the prayer, preaching and worship styles that developed during hush arbor meetings, live on in the contemporary Black Church.

The struggle for freedom has been a constant theme in African American history. Sterling Brown’s “Sharecropper” and Claude McKay’s “If We Must Die” call attention to the labor exploitation of African Americans, and the racial apartheid that was pervasive all over the country during the Jim Crow segregation period. The apartheid system was reinforced by the practice of lynching African Americans who transgressed the unjust racial laws and codes that defined Jim Crow. Gaining freedom was a must, but African American leaders differed in their strategies. Sociologist W.E.B. Du Bois was one leader who insisted on full citizenship rights, and freedom from exploitation for all African Americans. As one of the architects of the NAACP, Du Bois was a philosophical thought leader who guided African Americans throughout the early and mid-twentieth century in their struggle for freedom. Other social forces, like the Great Migration, which began just before the 1920s, also set the stage for the Civil Rights Movement of the 1950s and 1960s. Millions of African Americans flew for freedom to cities like Chicago, St. Louis, Detroit, Oakland, Boston, Philadelphia, Washington DC and New York City. Harlem in the upper part of Manhattan Island became a kind of capitol of African America, where the headquarters of the NAACP, and other activist organizations like Marcus Garvey’s UNIA (Universal Negro Improvement Association) were located. Essentially, huge numbers of African Americans who were denied the right to vote in the southern United States, moved to places where they could elect African American congressional representatives, like Adam Clayton Powell Jr., who were early architects of civil rights legislation.

The Great Migration also instigated a cultural movement called the New Negro Renaissance in the 1920s, that fostered the development of classic African American music like jazz. Harlem was central in this renaissance, and Black jazz musicians and their audiences poured into the upper Manhattan community from all over the country. These included giants like Duke Ellington, from Washington DC, and be bop architects like Dizzy Gillespie, Charlie Parker, Miles Davis, Max Roach and Thelonious Monk. The sound of Harlem was the sound of jazz, which floated out of the doors and windows of speakeasies, music clubs and dance halls like the Savoy Ballroom. The sophisticated language of jazz improvisation and style that these masters developed through their fluid saxophone, trumpet, piano and drum solos, sounded the freedom that African American migrants flew to the city to enjoy. Jazz was also the soundtrack for Harlem’s hotbed of radical Black activism, where many architects of the Civil Rights Movement, like A. Phillip Randolph, W.E.B. Du Bois and Ella Baker, lived and worked. The early work of these activists through the Brotherhood of Sleeping Car Porters, the NAACP, and the March on Washington Movement laid a solid foundation for the rise of the Civil Rights Movement. They helped to shape the SCLC, SNCC and CORE that engaged in the direct-action non-violent protests and demonstrations that eventually achieved sweeping federal civil rights legislation. Leaders like the Rev. Dr. Martin Luther King, Jr. Ralph Abernathy, Medgar Evers, Ella Baker, Fannie Lou Hamer, and the Rev. C.T. Vivian led this mass movement that changed the country and impacted the world.

The rise of African American student activism during the Civil Rights Movement nurtured the architects of the Black Power Movement that followed in the late 1960s into the 1970s. Civil Rights activists like Stokely Carmichael rose to prominence, giving African America a new vision of freedom that included an ideological, cultural and sometimes physical return to Africa. The Black Power Movement, and concurrent Black Arts and Black is Beautiful Movements, was a time to question and cast off internalized anti-Black mental colonialism that reinforced to African Americans ideas of African inferiority during their centuries in the United States. In the lineage of Martin Delaney, Black nationalist activists like Stokely Carmichael and Amiri Baraka heralded a celebration of Blackness and African roots. The political vision of Stokely Carmichael for African America included economic autonomy that engaged an African homeland return, and an alliance with African Independence Movements and leaders. His dramatic name change to Kwame Ture, to honor his mentors, Ghanaian president Kwame Nkrumah and Guinean president Sekou Ture, his marriage union with South African singer and anti-apartheid activist Miriam Makeba, and his flight from the United States to Guinea, exemplify the ideological and often geographical turn toward Africa among many African Americans during this time. As signified by the music of John Coltrane and the music of Bilal Abdurahman, much of African American music during this period incorporated instruments and aesthetics from the Continent. In the view of many Black artists of the time, exemplified in Nikki Giovanni’s poem “Ego Trippin,” celebrating Africa was celebrating the self. The philosophical turn towards Africa as a site for freedom is a legacy of the music, arts and political activity of the Black Power Movement. The ‘flying home’ of African America through African inspired attire, naming traditions, holidays and celebrations of Blackness that have continued into the contemporary, set the stage for the African American led US based anti-apartheid movement, the recent 2019 Ghanaian Year of Return, and quite possibly a final migratory flight back home.