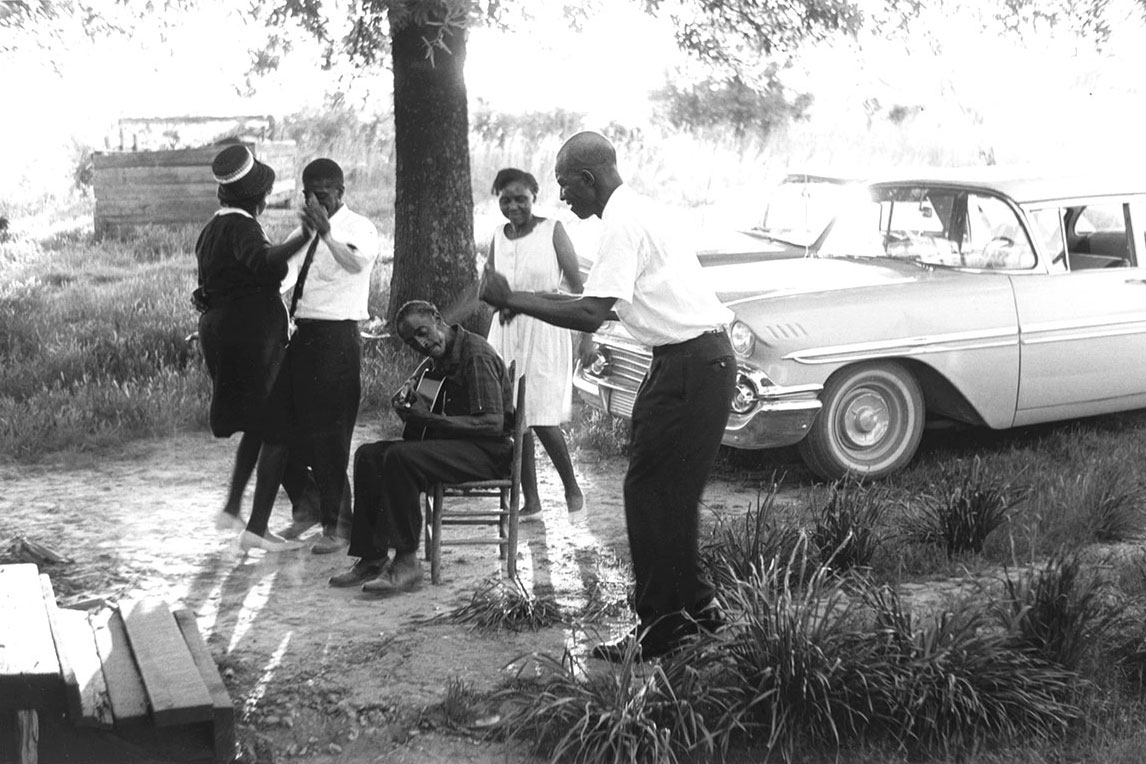 Click the image above to view gallery
“I went one day in the 1950s to Dauphin’s of Hollywoodthat was the name of the big record shop on Central Avenue in Los Angelesand I was looking at the records (all 78s at that time) when a young African American clerk came up to me and asked if I perhaps needed help in finding artists like Billy Eckstine, Sarah Vaughan, or Duke Ellington. When I asked her if she might have records by Smoky Hogg and such, she in a slight case of shock replied: ‘Oh!!You like those Down Home Blues!’”
—Chris Strachwitz

During the 1960s, as the folk music scene thrived, the careers of regional blues artists such as Lightnin’ Hopkins, Bukka White, Mance Lipscomb, and Fred McDowell were revived or newly ignited thanks to the recordings made by Chris Strachwitz on his Arhoolie Records label. In addition to recording living artists, Strachwitz’s Blues Classics label “rediscovered” other early artists, both living and deceased, who previously had been recorded on 78-rpm records, introducing countless new listeners to pioneering blues figures such as Memphis Minnie.

The blues was developed by African Americans, many descendants of enslaved peoples, in the rural, southern United States. It derived from a variety of sources—from field hollers, work songs, and spirituals, to country string bands. The music reflected the extraordinary poetry of the African American population during an oppressive era of racial segregation. Typically, the blues was played by individual musicians who sang and played guitar, piano, or harmonica at gatherings, house parties, dances, and beer joints. Early references to the blues date to the 1890s and early 1900s. The music was first regularly recorded in the 1920s and made popular in the mainstream beginning with Mamie Smith’s “Crazy Blues.” In later decades, as guitars became electrified and African American communities migrated to northern cities, new forms of urban blues emerged. The blues influenced many other musical styles, including rhythm-and-blues, jazz, white country music, and rock-and-roll.

“When I first encountered Black popular music in the late ’40s it was still called ‘Sepia’ by Billboard magazine. But when Hunter Hancock started his daily two hours of ‘Harlem Matinee’ programs over at KFVD in Los Angeles (where Woody Guthrie started on the air in the 1930s) it was being called rhythm-and-blues. Hancock also began to play more down-home blues like Fats Domino, Lightnin’ Hopkins, Sonny Boy Williamson, Muddy Waters, and Smoky Hogg. KFVD was a small station willing to sell time to minority groups to reach their growing ethnic audiences, which were not given air time over the main white stations. By the time I went to Pomona College in 1951 or ’52, I attended one of those R&B shows at the Olympic Auditorium in Los Angeles, which was MC’d by Hunter Hancock. It featured an amazing mix of a ‘honking’ sax band, vocal groups, R&B singers, as well as blues singers who all had records played on Hancock’s program. This was to me at the time the most exciting music with solid 4/4 rhythm pounding away while the saxes kept blowing riffs wildly—all this attended to by a mixed audience, primarily Latinos, Blacks, and very few whites, as I recall.”

Chris Strachwitz’s journeys took him all over the South. He discovered important local blues artists. He traveled and was counseled by blues scholars Paul Oliver and Mack McCormick, who helped him find artists. Sometimes he had just a name from an old record label to go on. In an era where it was easy to find electric urban blues records, Strachwitz sought out the “down home country blues” players. Some of them, like Mance Lipscomb, Lightnin’ Hopkins, Jesse Fuller, and Mississippi Fred McDowell, were brought to major folk festivals, were emulated by younger urban folk musicians, and sold quite a number of records. That being said, there was plenty of room in his catalog for urban blues singers. His roster was an amazing collection of inspiring artists. He also located practitioners of older African American string band music, which was becoming scarce. It was important to document these musicians, and he was one of the few doing it. Some of these people we may have never heard if he had not.