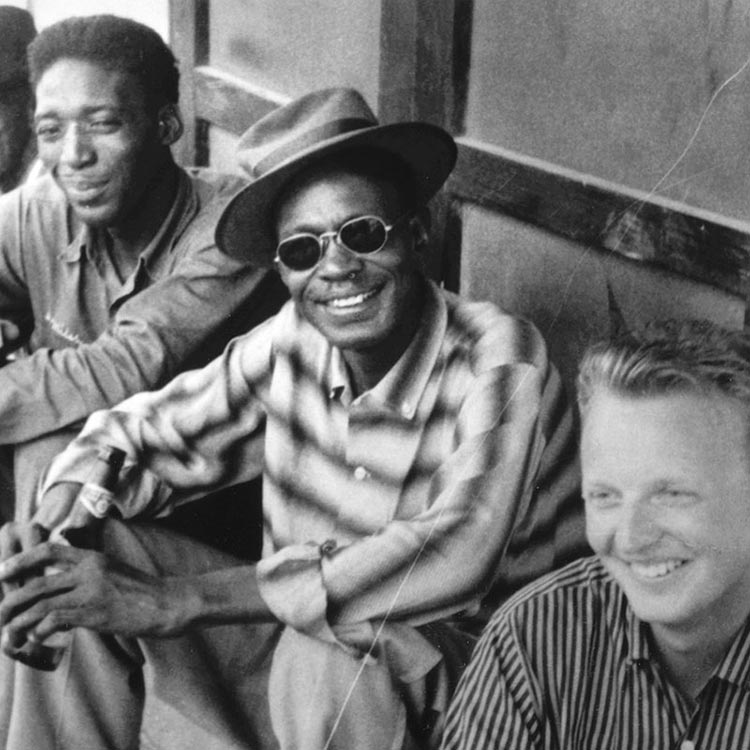 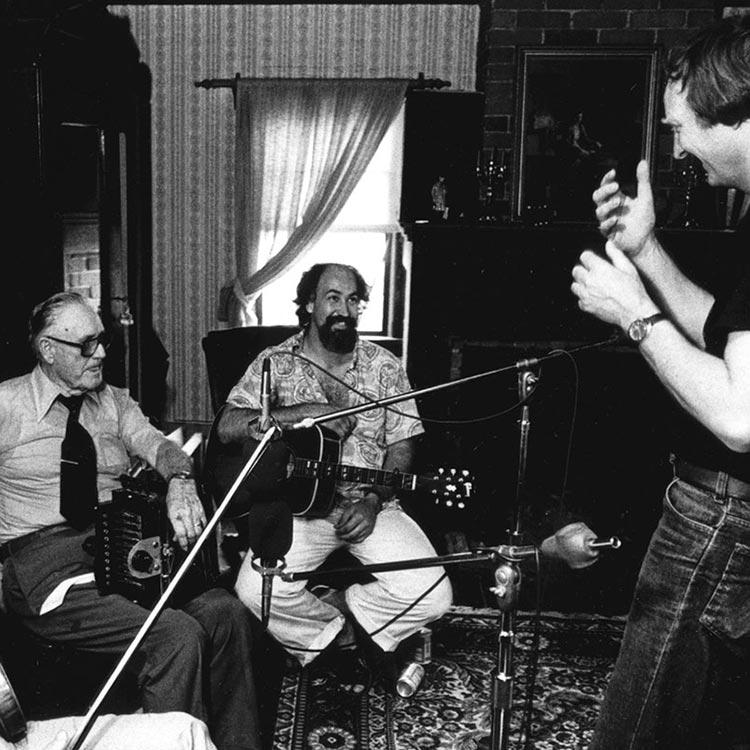 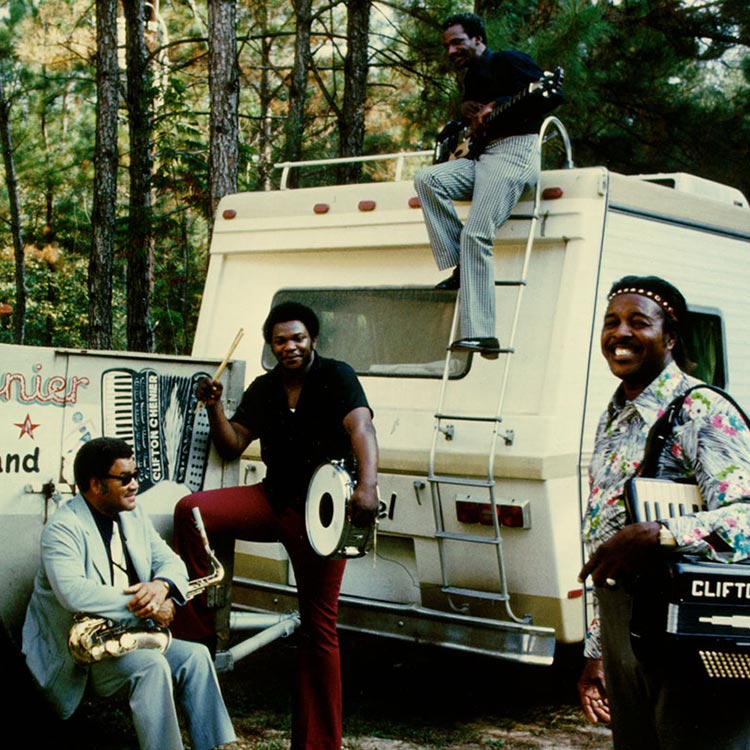 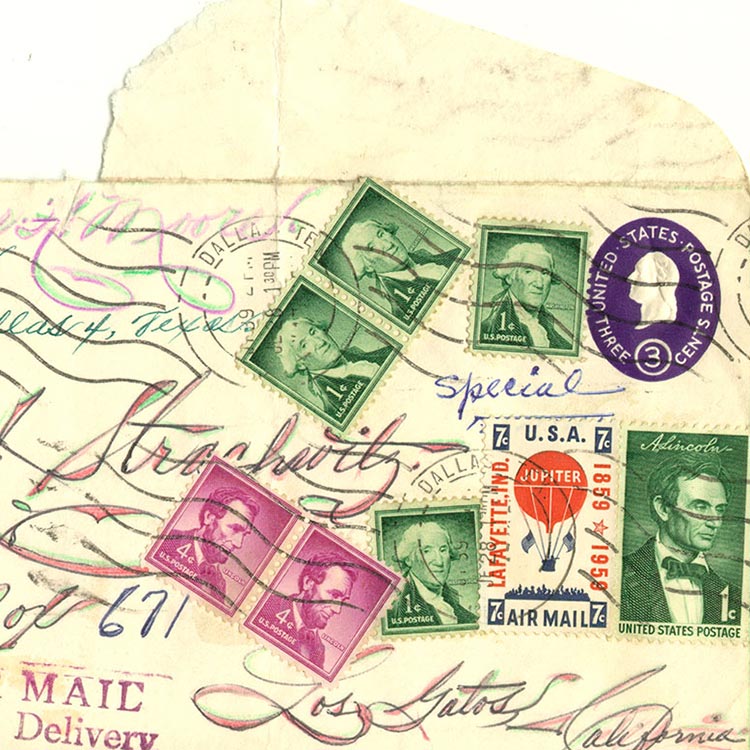 Arhoolie Records
1960–present
A sonic journey of roots musical traditions from the United States and Mexico.
Down Home Music Since 1960
Arhoolie Records is the result of one man's lifelong musical passion and journey—Chris Strachwitz. Arhoolie exposed the wider public to important regional musics championing the artistry of such artists as Lightnin’ Hopkins, Mance Lipscomb, BeauSoleil, Flaco Jiménez, and others. It is the most important roots record label of the last sixty years. 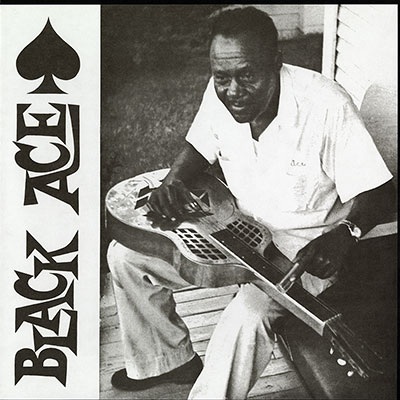 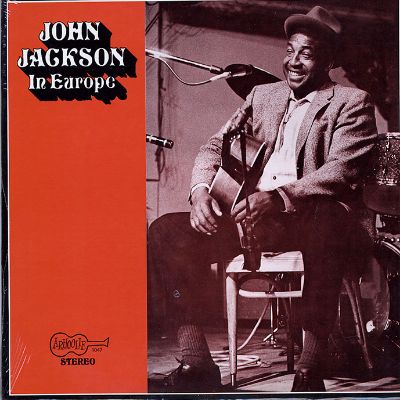 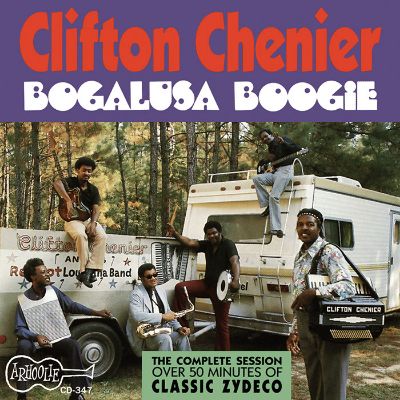 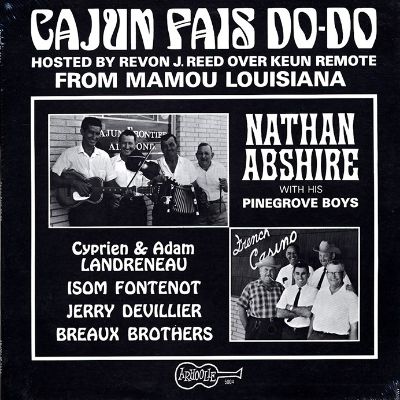 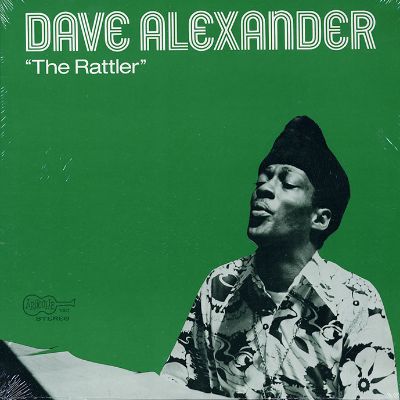 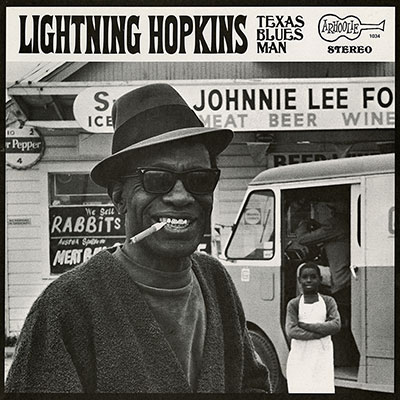 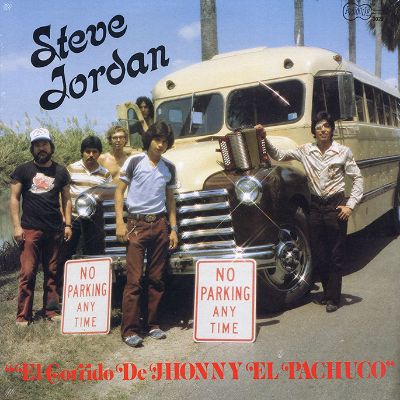 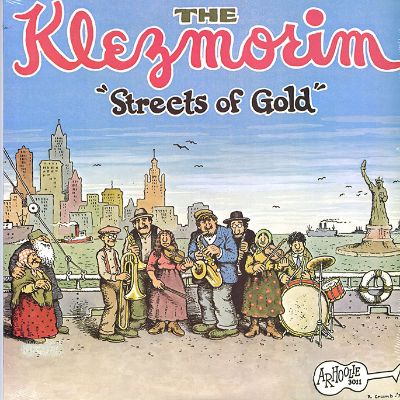 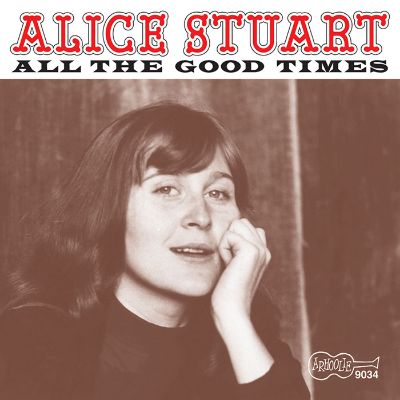 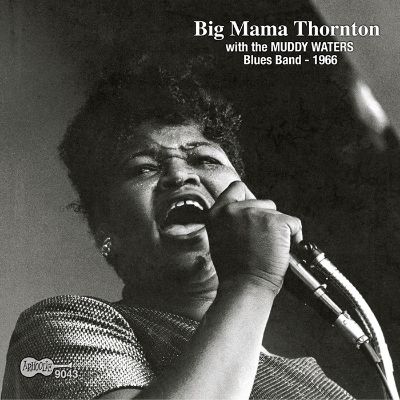 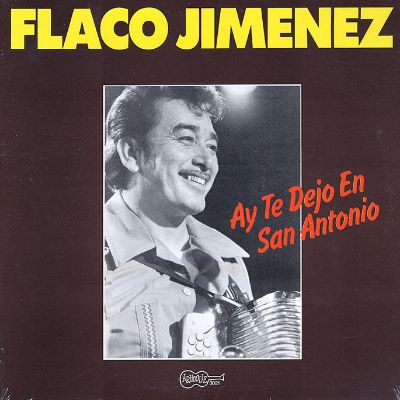 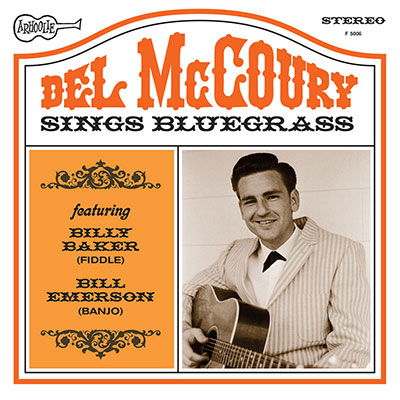 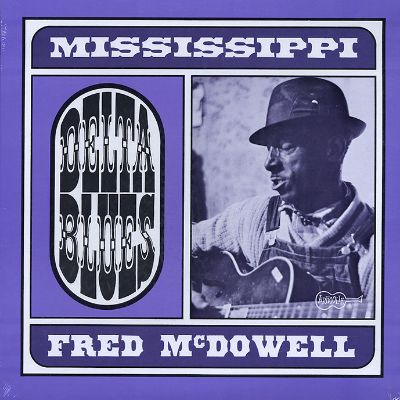 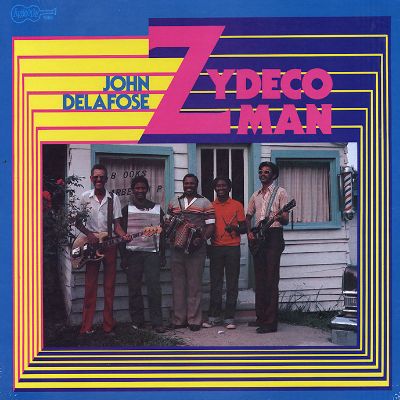 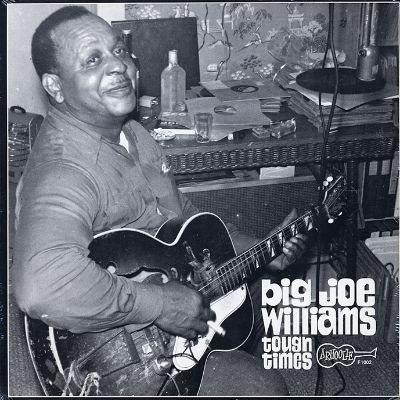 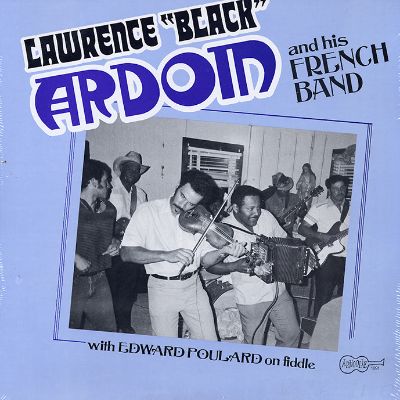 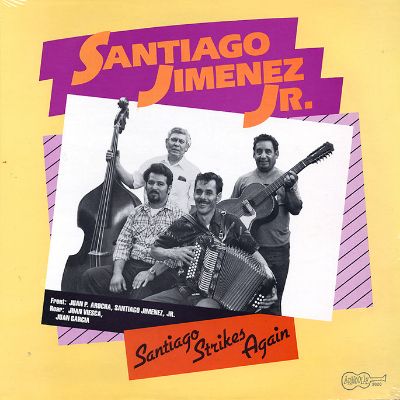 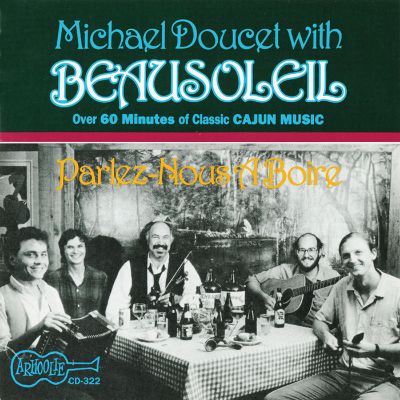 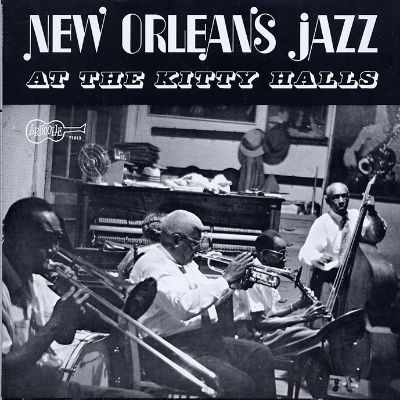 The Story of Arhoolie Records

Chris Strachwitz (b. 1931) grew up in the German province of Lower Silesia, which became part of Poland following World War II. Towards the end of the war, Strachwitz and his family fled the advancing Russian army, staying with an uncle near Brunswick in the British Zone and eventually settling in the United States in 1947. Strachwitz’s maternal grandmother was an American, and one of his great-aunts, who lived in Reno, Nevada, hosted the family for many years before they moved to Carmel, California. During this time, Strachwitz quickly developed a passion for American vernacular music. As a shy, lanky teenager in private school, he saw the movie New Orleans, which starred Louis Armstrong and the Kid Ory band, and he instantly fell in love with New Orleans jazz. Strachwitz started listening to radio broadcasts of hillbilly-country, rhythm-and-blues, gospel, and Mexican music. Around this time, Strachwitz also began collecting 78-rpm records, a passion that he has continued to pursue throughout his life.

After college and a two-year stint in the United States Army, Strachwitz worked as a German teacher at Los Gatos and Saratoga high schools in California. In the summer of 1959, he traveled by bus to Houston, Texas, where he met and saw blues legend Lightnin’ Hopkins perform in a small beer joint. Struck by his improvised lyrics and spontaneous exchange with the audience, Strachwitz knew he wanted to record him in that setting. Strachwitz returned the following year hoping to capture Hopkins live—only to discover that the musician was on his way to California. Strachwitz’s friend and host Mack McCormick, an amateur folklorist, musicologist, and taxi driver, then took him north to the rural town of Navasota, where the pair met and recorded Mance Lipscomb, a Texas sharecropper skilled at performing a variety of folk songs, ballads, dance tunes, and blues. 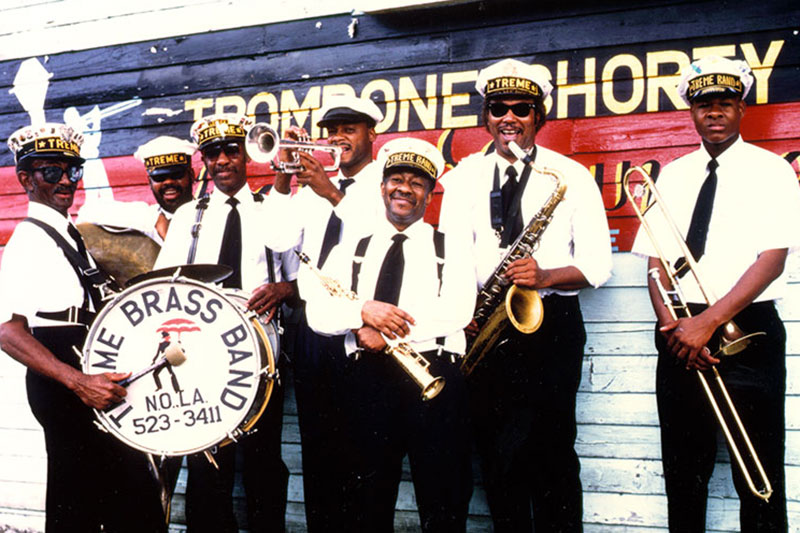 In November of 1960, Strachwitz released the first LP on his Arhoolie label featuring Mance Lipscomb. McCormick suggested the name Arhoolie to Strachwitz; it allegedly meant “field holler,” though “hoolie” was likely the correct term. Strachwitz and his friend, graphic designer Wayne Pope, single-handedly pasted the front covers on 250 black cardboard record jackets. Pope created the guitar-shaped logo that appears on every Arhoolie recording.

Strachwitz’s recordings continue to introduce generations of fans to a variety of vernacular musicians who might otherwise have remained unknown. He has recorded several important blues singers, and his Cajun, Creole, and zydeco releases—including the “King of Zydeco” Clifton Chenier—aided in popularizing these genres. Strachwitz’s numerous Mexican American recordings include Flaco Jiménez, who won a Grammy for the Arhoolie album Ay Te Dejo en San Antonio y Más! Strachwitz also traveled around the country recording a number of gospel steel guitarists in their homes and churches. He also made country and jazz recordings as well as releasing records of older ethnic and regional music. In 2016, Strachwitz won the Grammy’s Trustees Award, which parallels a Lifetime Achievement Award. The same year, Ed Littlefield’s Sage Foundation purchased the Arhoolie label and gifted it to Smithsonian Folkways Recordings in order to preserve Strachwitz’s important contributions to the history of American traditional music in perpetuity.

The popularity of folk music in the 1960s fostered an interest in vernacular music. The Berkeley Folk Music Festival, directed by Barry Olivier, took place at the University of California, Berkeley, from 1958 to 1970. This preeminent folk festival featured both traditional and contemporary artists. Strachwitz, at Olivier’s invitation, introduced a number of artists to the Berkeley festival and folk scene, including Mance Lipscomb, Fred McDowell, Big Mama Thornton, J.E. Mainer’s Mountaineers, the Hackberry Ramblers, and Los Tigres del Norte. Mance Lipscomb, with whom Strachwitz made his first record, performed at the festival in 1961, where he faced an audience of 4,000 people—a far cry from the small East Texas dances he was accustomed to playing. Lipscomb would continue to perform at folk festivals and clubs around the country and became an influential figure in the folk music scene, inspiring a number of musicians such as Bob Dylan, whom he met in Berkeley.

In 1965, Strachwitz produced the first Berkeley Blues Festival. The successful event featured Arhoolie recording artists such as Big Mama Thornton, Mississippi Fred McDowell, and Chuck Berry, among others. The following year, Lightnin’ Hopkins, Mance Lipscomb, and “King of Zydeco” Clifton Chenier—nationally unknown then—performed at the festival, as did Muddy Waters and his band. Many of these artists also played in the American Folk Blues Festival, which toured Europe annually beginning in 1962, introducing European audiences to preeminent blues musicians of the day.

Ed Denson, a friend of Strachwitz’s, introduced him to local protest and folk singer Country Joe McDonald in 1965. Strachwitz recorded him in his living room performing “I-Feel-Like-I’m-Fixin’-to-Die Rag,” an anti–Vietnam War protest song, and casually garnered the publishing rights to the song. The soon-to-be famous song later appeared in the Woodstock Festival movie and soundtrack. Royalties from the song eventually enabled Strachwitz to purchase a building in El Cerrito, California, which served as Arhoolie’s headquarters, and today continues to house the Arhoolie Foundation and Down Home Music Store. For over fifty years, Strachwitz introduced eager listeners to music that moved him. Boldly ignoring commercial trends, Strachwitz insisted, “I’ve never recorded things I didn’t like.”

The Work of Chris Strachwitz

Chris Strachwitz is a record man—an individual with a rabid passion for music and especially records. A network of such collectors trade tapes of music and have actively set out to find and acquire 78-rpm recordings from the golden age of American vernacular music—blues, jazz, country, Cajun, Latino, and other genres. In the 1950s and early 1960s the majority of these old discs were out of print, and so many collectors started record labels like County, Origin Jazz Library, and Chris’s Arhoolie in 1960, followed by his Folk-Lyric label, to make this music available again. Anthologies and releases drawn from the collections were acquired by musicians who found treasures to perform on their own set lists, getting these songs back into circulation. “Collecting is obviously a real addiction! And collecting old records is a very special type of addiction which not only gives you great pleasure per se—but the hunt is rewarding and enjoyable, like when my father hunted animals which we enjoyed eating. But with records you don’t have to kill a living being but you can further enjoy the fact that others may also enjoy the incredible music in those old grooves if you help make them available again on modern sound carriers! I feel this is especially desirable for cultural and historic reasons but even better if the artists can be rewarded if they can still be found” (Chris Strachwitz interview with Tom Diamant, August 4, 2020).

Chris made it his life’s work to seek out the music he loved. He steered clear of pop music and gravitated towards the vernacular music of communities around the United States and Mexico. In sixty years, he discovered countless amazing artists and keeps the work alive with his Arhoolie Foundation. Chris took various genres of music which previously only could be found on small local record labels and used Arhoolie to distribute these musics worldwide. The nationwide popularity of Cajun and zydeco since the late ʼ70s can be traced directly back to the wonderful albums Chris released. He used a network of music scholars to turn him on to new sounds. With the help of folklorist Bob Stone, for example, he brought the sacred steel music of Florida to public attention.

The musical core of Arhoolie is blues (country and electric), Black string bands, Cajun, zydeco, country, and bluegrass, and especially music from Texas and Latin America. Chris amassed a huge collection of Latino 78s, acquiring the Ideal, Falcon, and Discos Smith labels; some of this material made its way onto Folk-Lyric Records. His massive Latino 78 collection has been digitized as the Frontera Collection and is available online through UCLA.

Chris has also been involved with filmmaking. In 1963 with German filmmaker Dietrich Wawzyn he created Down Home Music: A Journey Through the Heartland 1963. Many of the featured artists made their way to Arhoolie. He also had a long collaboration with Les Blank, Maureen Gosling, and Flower Films, bringing some of the wonderful music he found to the screen. Les and Chris’s production company, Brazos Films, made such films as J'ai été au bal, Chulas Fronteras, and Del Mero Corazon. Many of the soundtrack recordings were released on Arhoolie.

So explore Arhoolie Records if you want a deep dive into the roots of the roots. Experience the fruits of one man’s journey.