The Art of Paredon 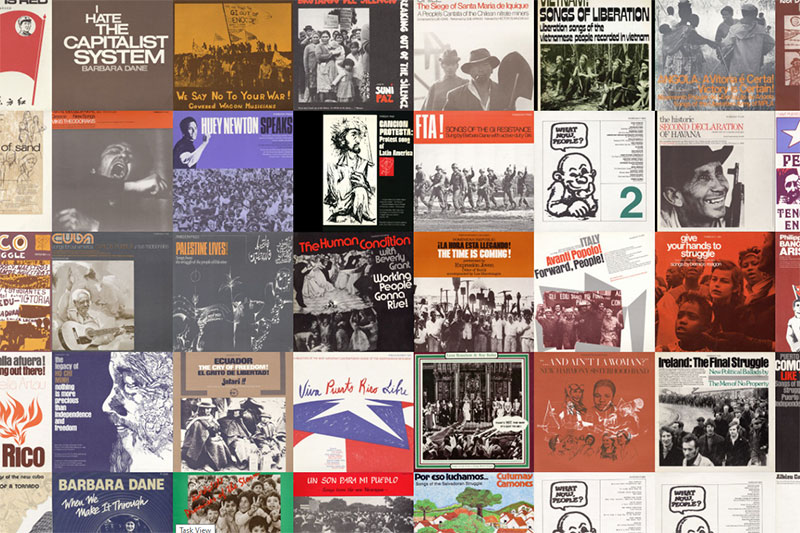 In 1991, Senior Archivist Jeff Place interviewed Barbara Dane and Irwin Silber about their personal histories and their experiences as label co-founders. In the following interview excerpts, Dane describes the design production process and how she acquired the photographs used on the covers of the informational booklets that were a signature part of the Paredon album package.

Barbara Dane:
I used to comb the files of the Guardian newspaper and the Liberation News Service that existed at the time in New York. There were different artists—Peg Averill gave me some things, and another woman named Mimi Rosenberg did a couple of covers. Different people would do original artwork and then some of it was just found stuff. I would comb through publications I had from other countries.

Sometimes the Cuban things ... basically, whoever I talked to down there at any point where I needed something from them—it was just a question of, “Well we can’t, you know, we’re not allowed to sell you anything. And we can’t get any of our materials there to, you know, be known there, so whatever you want to take and do, it’s okay with us. Go ahead and do it.” So it was basically a handshake overall agreement. And I would go, when I was there, to something called the OSPAAAL. It was Organization of Solidarity of the People of Asia, Africa, and Latin America. And they published in a magazine called TRIcontinental, which had great artwork. Sometimes I’d snatch a piece out of there. Or as time went on, I used it, I’d be in touch with the artist in different countries. I’d ask them to send me sides of recorded materials. I’d ask them to send me graphic materials. “I need photos for the booklet. I need cover art.” I need this; I need that, you know. And you’ll see as it unfolds that artists began to supply that largely.

But it was always a last-minute scramble to find something decent to put on the cover, something interesting, something just right. I happen to really like a good photograph for that purpose ’cause it reproduces. We were only able to do two-color covers. So reproducing a photo in black and white, you know, or a good line drawing, is fine—is great. The problem is that we were living in a world of color movies and color magazines and everything. It’s not as easy to market it in a bin that is of all full-color things—especially as the psychedelic age of the 60s brought on a huge amount of color.

So we just tried to make it as dramatic as we could without spending money. We’d have to spend for full-color stuff. And then we had this whole system of printing the “slicks,” as they’re called. In our case—we didn’t use slick paper, but they’re called slicks because most people used slick paper. We would print the slicks in certain quantities. Those can be stored and then they can be later pasted on the jacket as needed .... So it was the most economical by far way to do that rather than send it—the way things are done now, you know—send it to have a full color such-and-such-made where it’s all assembled and stuck together. In that case, we would have been stuck with stacks and stacks of empty [sleeves], you know, things to store. We didn’t have warehouse space. We weren’t about to start having warehouse space. So it was designed—the process was designed to accommodate the finances.

The only thing that I didn’t really like to skimp on was the booklet itself and, of course, the sound quality. I was really striving all along to get the best sound quality possible.

... Nobody could ever imagine how much of my and all my friends’ labor went into making these records look like real respectable products, you know. And I’m very proud of the fact they do look good, they look fine. You know there’s nothing shoddy about any of the booklets or the record or the quality of the recording or the covers. There’s nothing shoddy about it. Everything’s done as best as we could do it. Okay, but the fact is that most of that was done just by, you know, burning the midnight oil. Exploiting all your friends ....

During the course of the interview, Dane and Silber recalled the motivations and activities that specifically shaped some of the Paredon album covers: 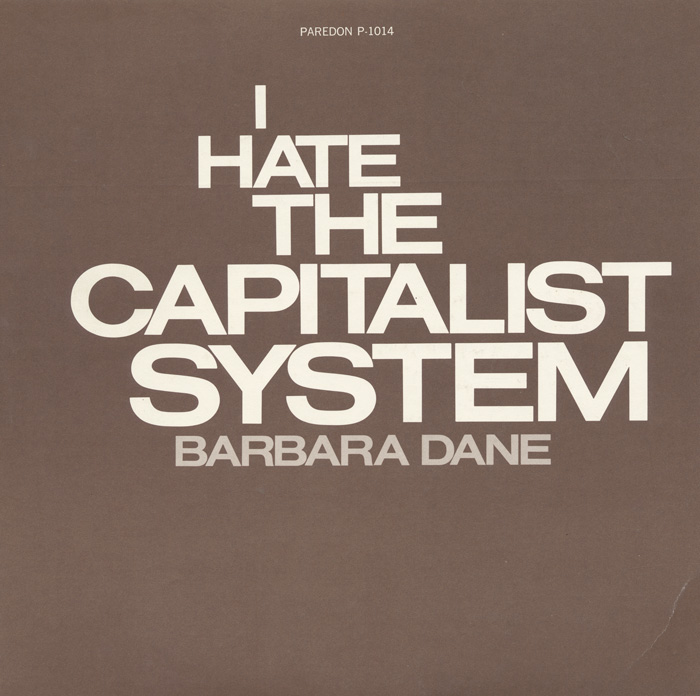 I Hate the Capitalist System, 1973

Barbara Dane: You know I’ve met people who bought the record just to have the cover to put up on their wall. They wanted that slogan on their wall.

Irwin Silber: Well, what we tried to do with that was, I mean, it comes off as a really big statement.

Barbara Dane: The idea I was taking off on was the graphic design of their then-current slogan “Things go better with Coke.” They had “Things” smaller, then the words got bigger, bigger, BIGGER. Remember that logo?  So I was taking it off that idea with the “I” small and then “Hate the Capitalist System”  bigger and bigger, with “System” hitting you in the face, trying to make it very stark, you know. Nothing to take your mind off what it was saying.

Irwin Silber: I had in mind that it should be done as though somebody had written it on a fence with whitewash or something like that. But Ronnie Clyne, who designed the cover, maybe that violated his sensibilities. He could never—he couldn’t bring himself to do it.

Barbara Dane: He could have done it, but I was really into that “Things go better with Coke” thing, just wanted to rip off their very cool design idea. Probably nobody noticed it but me. 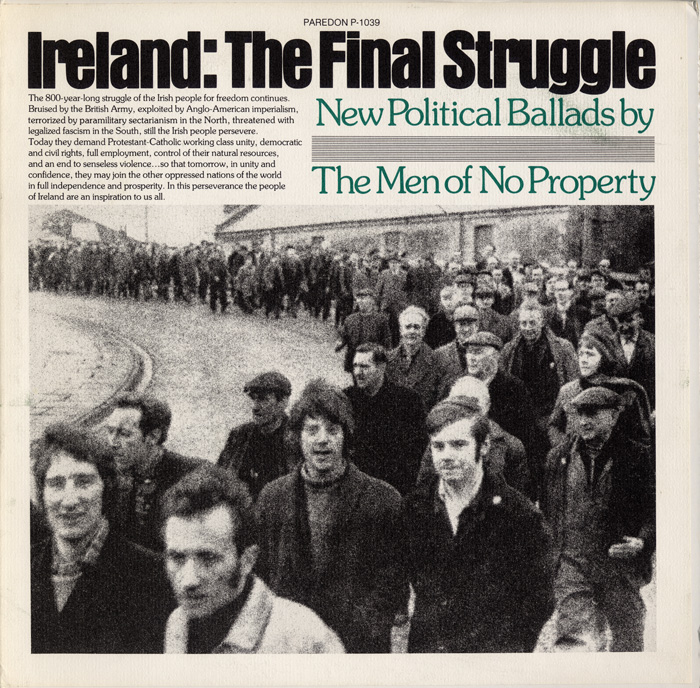 Barbara Dane: I had contacted someone from the U.S. Sinn Fein group in order to get a better understanding of the movement as well as for advice about how to make the recording useful to all sides of the Irish opposition to British rule, a movement which has historically been rent with sectarianism. We had made contact with the singing group through Ewan McColl, and it turned out that the music itself was made by, and some of the ideas in it were acceptable mainly to, only one part of the movement. In search of a better balance overall, I was looking for something to depict the Irish working class, which would cut across ideological lines. We went through a lot photos, looking at them until finally we came upon the one that is on the cover. I love the photo, just the design of the photo, the way the men are coming out of the factory, and women, too, workers are coming out of the plant and how they look. He says, ‘Well, those are mostly Protestants.’ I said, ‘How do you know?’ He says, ‘Oh I can just tell by the way they look.’ I gather by the way they were dressed, by their general air, or maybe there’s something subtle in their general physiognomy that to the non-Irish it’s not apparent. But he said, ‘No they’re mostly Protestant.’ So I said, ‘Well good, at least they’re all workers. That sounds like a good cover.’ So we used that. In the end, we might have succeeded in making it useful to neither side. I hope not. The songs are great! 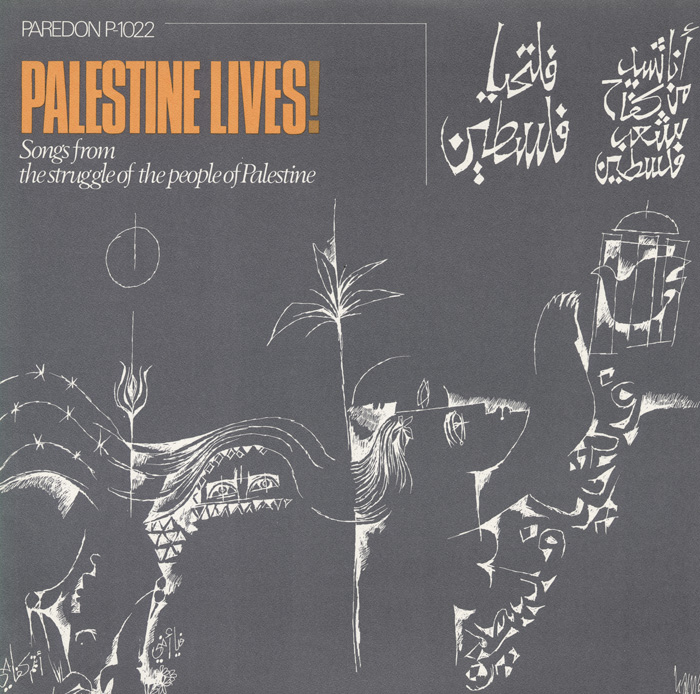 Palestine Lives! Songs from the Struggle of the People of Palestine, 1974

Barbara Dane: I was able to find some Palestinians living in New York and luckily they put me in touch with a woman named Miriam Rosen, who was doing a radio series on WBAI in New York— a Middle East news round-up. She was kind enough to write a concise introduction to the situation in modern Palestine/Israel for the booklet.  Miraculously, she also linked me up with Kamal Boullata,  a widely recognized Palestinian artist who had done some illustrations for a book of poems of Mahmoud Darwish, probably the best known Palestinian poet of the modern times. Boullata lived in Washington but he made a trip to see me in Brooklyn, and to my everlasting gratitude he became very involved in the album. He very, very much wanted to see this project happen. If you look in the booklet, the songs are typed out in Arabic script. He got this done. He translated the songs. He wrote the introductions to the songs. He also generously designed and made a beautiful original drawing for the cover. He did a tremendous amount of work on this whole project, even though it is clear he is a famous artist with plenty of other things to do. He just decided he wanted this to happen. So now we have it. To tell you the truth, it could never have become the precious thing it is without Kamal Boullata. 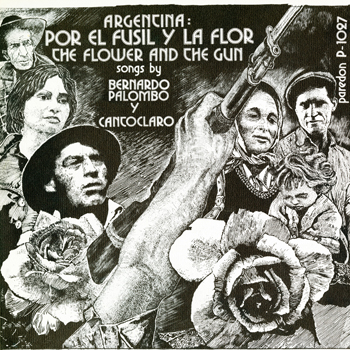 Barbara Dane: There are so many European strains in Argentina that it’s very hard to figure out what a typical Argentine looks like. So we knew an artist who wanted to do the cover. And she was willing to do the research, so she got out different books and looked around, tried to find out what an Argentine person actually looks like, you know, more of a prototype. She couldn’t find anything, so she went to the Argentine embassy, and she said, “Give me some photographs of some Argentines. I want to make some typical Argentines.” So she said they kept showing her pictures of pin-up girls and stuff out of tourist literature ... So she said, “No, no. I mean Argentine, you know, like Che Guevara.” And these, of course, were fascist Argentines in there. And they said, “Che Guevara—He’s not Argentine, he’s Cuban.” The whole world knows he’s Argentine!

So she eventually had to just kind of speculate. Later on, a year or two later, I went to Cuba and I took a copy of that record and a copy of Che Guevara Speaks, and I gave them to Che’s father, who was living in Cuba at the time. I had a wonderful evening just talking and getting acquainted with the old guy, and so I told him the story. And meanwhile he’s sitting there with a pencil and paper, and in about two or three seconds, you know, he’s drawn this little drawing, which I still have somewhere in my files. He says “There, that’s a typical Argentine.” And of course it was a very indigenous-looking face, and he’d captured it perfectly. It turns out he’s a very good drawer. So too bad we didn’t have Che’s father’s drawing on the cover, but we have a very handsome one by Mimi Rosenberg.