When I sat in on a workshop given by Students for a Democratic Society at Princeton University in 1967, I had no idea of the impact it would have on the rest of my life. The workshop topic was women’s liberation. It was an awakening, a dawn of consciousness that gave me a framework to understand my life and a path that I continue to follow.

I began writing and performing socially conscious music in the late 1960s. As a result of my early exposure to the women’s liberation movement, I wrote my first parody to the tune of “Ain’t She Sweet.” I performed it on the bus ride down to Atlantic City and again on the boardwalk at the 1968 Miss America Beauty Pageant protest. I soon graduated to original songs, often with feminist themes, such as a love song entitled “Our Love Ain’t Right, I Can’t Be Yours and Still Be Me,” and a song about street harassment entitled “I’m Tired of Bastards Fucking Over Me.”

Like many young people in those days, I became radicalized by the Vietnam War, the anti-imperialist movement, and the civil rights and black power movements, as well as the women’s liberation movement. I immersed myself in activism and study.

When I discovered the women’s liberation movement in 1967, I started to feel that I could take ownership of myself. I had left my husband and a subsequent musician lover, whose come-on line to me was “I'll make a woman out of you.” I picked up a guitar and started singing again. Songwriting became my way to work out thoughts, feelings, and beliefs, and to connect with others.

In 1972 I started a band called The Human Condition. Barbara Dane from Paredon Records recorded us in 1974. Barbara had befriended me in the early seventies and became somewhat of a mentor to me. We put out an album called The Working People Gonna Rise! Laura Liben and I wrote a song about Janie, a working-class woman from Ironbound, New Jersey, who left her home to get away from her father’s control, married a man named Charlie, and then ultimately left him, singing:

I also wrote about Charlie, because I saw him as a victim as well.

Charlie’s all alone trying to hide his hurt, ’cause he can’t let his friend see him cry. And he curses the iron as he ruins another shirt, but he’s starting to ask himself, why.

People came up to me and told me that I was singing their story. That meant a lot to me, and I began to understand that most of our stories, poor and working people’s stories, aren’t what we hear on the radio.

As I studied history from works such as Labor’s Untold Story, Black Reconstruction in America, and The Wretched of the Earth, I began to understand the powerful context of labor songs such as “Which Side Are You On,” written by Florence Reece, who was a miner’s wife, “Bread and Roses,” about the 1912 textile workers’ strike in Lawrence, Massachusetts, and “Follow the Drinking Gourd,” about escaping slavery in the South. The power and the beauty of the lyrics, as well as the stories in these songs, touched me deeply.

Audio
“Which Side Are You On?”

In 1991, the United Association of Labor Education Northeast Union Women’s Summer School, a week-long leadership institute for union women, invited me to join their staff. They hired me as their cultural director and gave me the freedom to create a cultural presence. I was invited into the planning process—a rare invitation, in my experience. More often within the union movement and other social movements, cultural workers are treated as “entertainers.” To actually have an impact in the planning phase allowed me to influence the integration of culture into the learning process and helped to build solidarity among the participants. I loved the diversity and common purpose of the students and felt like I had found a place where I belonged.

Some of the staff had developed a slideshow about women’s labor history, which I inherited. Over the years, it grew into a ten-character, scripted, multimedia performance piece for which I wrote the title song “We Were There!” The performance uses personal narratives of historic figures such as Sojourner Truth, Mother Jones, Pauline Newman, and Elizabeth Gurley Flynn. It weaves traditional labor songs throughout, including “Which Side Are You On” and “Bread and Roses,” to focus on the contributions that women have made to worker’s rights and to the labor movement. In addition to performing the piece at the Northeast Regional Summer School each year, I travel with it and present it to unions and labor studies programs at colleges around the country. I often customize it to include a character who is local to the area or union for which I am performing. I also ask for participants to read the parts. This keeps each performance fresh, provides a sense of personal involvement for the group I’m presenting it to, and teaches me a lot about the history of the particular constituency or locale in which I am presenting.

What I have found in performing this show is that women have a deep hunger for women’s history—particularly for the types of stories that resonate with their lives. When I teach readers the title song, which they sing with me at the end, some break into tears upon hearing their story told.

I also learn from, share, and connect with other cultural workers in organizations like the Great Labor Arts Exchange, sponsored by the Labor Heritage Foundation, the People’s Music Network, and the Freedom Song Network. These organizations are places to share ideas and provide support for us “not so famous” musicians trying to have an impact on bettering peoples’ lives.

I continue to write songs that focus on poor and working women. I write about modern sweatshops outside of the United States that mirror the unsafe and low-wage conditions of the sweatshops here in the early 1900s. I write about violence against women that crosses all class boundaries and borders. I write about women in Africa who triumph over tremendous odds to create safe havens and prosperity for themselves. I look for the common threads that bind us through the personal stories of real people, each struggling for a better life.

I am convinced that we all need and hunger for music that tells our stories. Fortunately, the Internet has opened a window of communication for those of us who want more than what corporate-controlled media offers us. Even the means of production have become more accessible in the digital world, for both music’s creators and listeners.

Labor music is alive in the United States in the work of Anne Feeney,1 emma’s revolution, Evan Greer, Paddy Mills, Kim and Reggie Harris, and countless other singer-songwriters who sing the old songs and are writing and learning new ones that talk about what is going on today. There are labor choruses in many cities, and people coming together all over the country for Solidarity Sing Alongs, modeled after the one which started and continues today in Wisconsin.

The current labor movement in this country no longer has the vibrancy and cultural impact of the Wobblies (the Industrial Workers of the World), but many of the songs from artists like Woody Guthrie, Florence Reece, and Pete Seeger are still relevant today. Labor organizers would do well to use current labor music and cultural expression in their organizing efforts.

In the United States, women are the fastest-growing segment of the labor movement. Organizing is going on among domestic workers, fast-food and restaurant workers, and service workers who are still largely ignored by the traditional labor union movement. Workers’ centers and other organizations are popping up all over the country, and some of the big unions are beginning to notice and offer support. This is a glimmer of hope for revitalizing a sadly depleted worker’s movement in this country. I am excited by the energy and enthusiasm, and I foresee the creation of new labor songs to inspire and tell these stories.

The Occupy movement clearly demonstrated to us that the income gap continues to get wider and wider, and that Americans increasingly seek venues for voicing their concerns. The one percent of the country who reaps the profit of our labor is unlikely to have a change of heart and suddenly give us a fair share. As Chris Iijima, a wonderful Asian American singer-songwriter friend of mine wrote some forty years ago, “dust don’t fly away without no broom sweeping.” With this reminder, music remains a powerful tool for social action.

Bev Grant is a veteran social activist, feminist, and labor singer-songwriter. She founded and directs the Brooklyn Women’s Chorus and presents a multimedia performance about women’s labor history called “We Were There!” She recorded two albums with her former band, the Human Condition, and currently performs with Ina May Wool in a duo called WOOL&GRANT. Her website: bevgrant.com.

1 Based in Pittsburgh, Anne Feeney is the granddaughter of an intrepid mineworkers organizer, who also used music to carry the message of solidarity to working people. Utah Phillips once called her “the best labor singer in North America.” 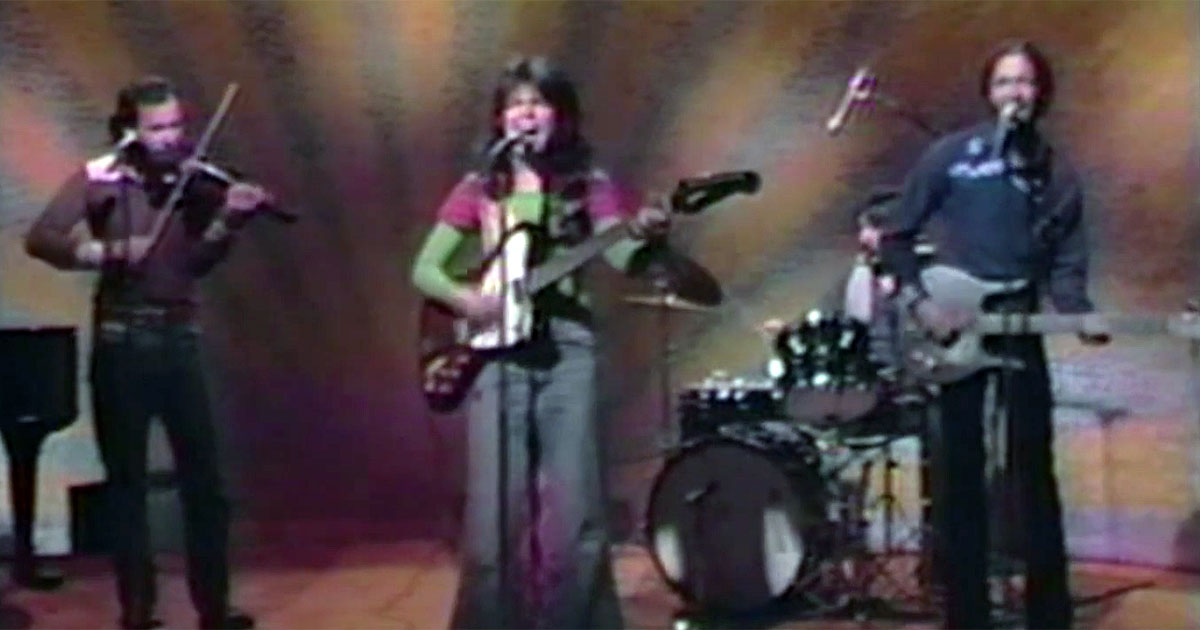 Video: The legal case of Inez Garcia—who was convicted of murder for killing a man who helped rape her—became symbolic in the women’s movement, underscoring women’s right to fight back against violence. The Human Condition (Bev Grant, vocal and guitar; Peter Farnese, drums; Gene Hicks, violin; and Jerry Mitnick, bass) perform this song written by Bev Grant as part of a Channel 13 WNET show called “Woman Alive,” broadcasted in 1975. Courtesy of Bev Grant. 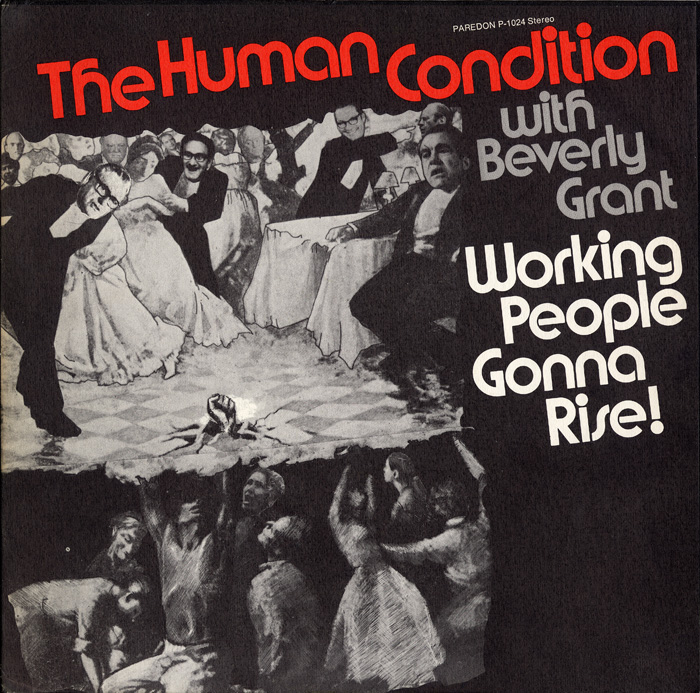