Smithsonian Folkways is saddened to learn of the passing of Jean Ritchie. An inimitable force in traditional music, Ritchie was a songwriter, ballad singer, musician, and folklorist, and is credited with resurrecting the Appalachian dulcimer.

Born in 1922 in Viper, Kentucky, Jean’s love of music started early. She was the youngest of fourteen in a family of musicians and learned tunes from church and family get-togethers. From her father and uncle, she learned to play the Appalachian lap dulcimer. Much of her repertoire of Child ballads and hymns came from these early influences, and it also included her own compositions relating the struggles and joys of living in her native mountains.

After graduating Phi Beta Kappa from the University of Kentucky with a degree in social work, she moved to New York City to work at the Henry Street Settlement, where she began to sing for children. There she met Alan Lomax, recorded for the Library of Congress, and began performing with legendary folk musicians such as Lead Belly, Woody Guthrie, and Pete Seeger. Throughout her life, she continued to perform and carry on the folksong tradition.

Ritchie recorded over thirty albums in her lifetime. She appears on fifteen Smithsonian Folkways albums, including the seminal two-volume British Traditional Ballads in the Southern Mountains (1960), the live record Jean Ritchie and Doc Watson at Folk City (1963/1990), and the influential The Appalachian Dulcimer: An Instructional Album (1964). She also released two albums of recordings she made during a Fulbright scholarship trip to the British Isles, As I Roved Out (Field Trip—Ireland) (1960), and Field Trip—England (1959). In 1955, she published her memoir and songbook, Singing Family of the Cumberlands, illustrated by Maurice Sendak. It was the second of her four books.

Ritchie received numerous esteemed awards and recognitions during her career and performed at countless folk festivals and on radio programs across the globe. She appeared at the Smithsonian Folklife Festival (formerly the Festival of American Folklife) four times, in 1968, 1972, 1973, and 2003. Along with her 1952 Fulbright scholarship, she also received the Folk Alliance Lifetime Achievement Award in 1998 and the National Endowment for the Arts’ Bess Lomax Hawes National Heritage Fellowship in 2002.

Beyond all of her achievements, her humble spirit and intimate connection to folksong inspired countless musicians, including Joni Mitchell, Bob Dylan, Dolly Parton, Johnny Cash, Emmylou Harris, and Joan Baez, among others. She was the subject of a tribute album, Dear Jean (Compass 2014), which features tracks by such renowned musicians as Pete and Peggy Seeger, Janis Ian, and Archie Fisher.

Jean Ritchie died in Berea, Kentucky, on June 1, 2015, surrounded by members of her family who sang at her bedside in the last hours. She was preceded by her husband, George Pickow (1922–2010), and is survived by her two sons, Peter and Jon Pickow, and brother, Balis Wilmer Ritchie.

On Ritchie’s passing, Smithsonian Folkways director Dan Sheehy commented, “Jean Ritchie was a role model for countless American musicians, bringing rural traditions such as those she grew up with in Viper, Kentucky to urban venues in New York City and beyond.  She did it all—performed, wrote songs and books, and shared her knowledge with an unending stream of adoring students.  We at Smithsonian Folkways will miss her dearly and will do all we can to perpetuate her legacy.”

Leave your memories and tribute to Jean Ritchie below. Links to audio or video tributes are welcome! 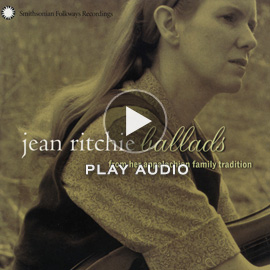 A playlist exploring Ritchie’s extensive career, ranging from solo voice and dulcimer, collaborations, and recordings she made on her Fulbright trip.
Playlist 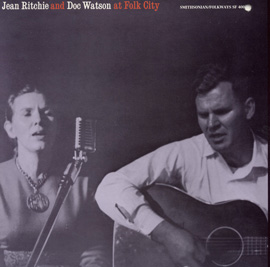