Music be the food of love, spirit, patriotism, and dozens of other isms, all hungry for the mysterious sustenance that musical vibrations provide. The world of traditional music is replete with an incredible variety—a vast, spicy, nuanced banquet of sounds. It is a repast especially enjoyed closest to the source, and I've spent decades listening to and recording music and ambient sound in the field. These recordings captivated me, leading me to partake in an ongoing feast of field recordings that played an integral role in my career.

It was 1967 and I had just seen Pasolini’s The Gospel According to St. Matthew. I couldn’t get the music out of my head: a driving, tribal version of what I guessed was the Catholic mass. Latin had never sounded so good. Powerful rhythms and soaring vocals gave me no peace until, with a bit of old-fashioned detective work, I found the source, an album titled Missa Luba,1 a mass sung “in pure Congolese style” by Les Troubadours du Roi Baudouin.

Originally released in 1958, Missa Luba was most likely recorded at the Brussels World’s Fair when Les Troubadours were on tour. It was my first strong taste of musical “otherness,” a vibration radically different from the folk, rock, show tunes, and opera music that I had listened to in my Wonder Years.

Missa Luba inspired me to harvest whatever other African music LPs I could lay my hands on, including Music of the Ba-Benzelé Pygmies, which is part of An Anthology of African Music in the UNESCO Collection of Traditional Music.2 I looked for field recordings that carry the subtle signals of music heard in situ on its home ground, as much a part of the soundscape as the calls of animals and insects. Like any truly great musical offering, these on-location recordings take me to places where words just can't go. I'd never heard anything quite like it before, and it punctured a hole in my armor of habitual listening.

As with Missa Luba, Ba-Benzelé Pygmies played on my inner jukebox effortlessly. Unlike, say, Western atonal music, there was no education or backstory needed to open the door. It hit me where I lived—an immediate visceral connection.

Music of the Ba-Benzelé Pygmies has famously influenced many musicians, who have sampled some of the riffs. Ethnomusicologist Steven Feld3 unraveled the story of Herbie Hancock copying a musical phrase of the Ba-Benzelé in the opening of “Watermelon Man,” which Madonna later sampled, crediting Hancock—not the Ba-Benzelé—in the liner notes! The album also inspired New Jersey native Louis Sarno, who had virtually no background in ethnomusicology or sound recording, to travel to the Ituri Forest and live with the Bayaka people (also referred to as the Aka or Ba-Benzelé) and record their music and sounds.4 Sarno's adventures are portrayed in films like Oka! (2011) and Song from the Forest (2013).

Alan Lomax suggested that the leaping intervals of pygmy music were characteristic of hunter-gatherer societies. I believe the Ba-Benzelé weave a spell which any non-hunter-gatherer could fall under. The communal, cross-generational sense of the music permeates the voices of men, women, and children in ensemble. The hindewhu whistle—playing the riff co-opted by Hancock—begins one of the tracks, followed by voices and clapping, each in a seemingly different yet oddly compatible rhythm. The apparent casual ambience of the gathering is belied by the complexity of the rhythms. There is a blend of both vigilance and relaxation here, with nary a hint of performance and the egoism that so often accompanies it.

Several of the albums currently available in the UNESCO collection resonate with the Ba-Benzelé recordings, including Aka Pygmy Music. Listen to “Nzombi” (track eleven) for echoes of the hindewhu.

For those of us who feel compelled to explore the mysterious delights of the world of sound, an album can be the catalyzing force to launch a recording expedition, just as it was for Louis Sarno.

For me, the sound track from the film Black Orpheus5 did the trick, enticing me to travel to Bahia, a state in northeastern Brazil, to record an album of music and sound in 1975. Bahia was where slaves were originally taken to in Brazil and, from what I had heard, it was the heart of Brazilian musical culture.

Not only the music of Black Orpheus beckoned, the flavor of Brazil was transmitted too: the hawker crying “cebolas, cebolas!,” the sounds of children scampering, the rhythms of Macumba,6 the ambience of life interwoven with Carlos Jobim and Luiz Bonfá’s seductive melodies. These elements combined to give the Black Orpheus LP a gritty authenticity, a brilliantly mixed combination of field and studio recordings.

The album I recorded, Bahia: Music and Moments of Brazil,7 conveys a different sonic palette from Black Orpheus, one no less richly detailed. As a fledgling sound recordist, I targeted holidays, often religious in nature, and they did not disappoint. The very first recording I made in Cachoeira, a small village in northern Bahia, was at the Festa da Boa Morte, and it yielded a soundscape montage of church choir, bells, skyrockets, and a marching band organically interwoven with the rest of the sounds—a natural mix that could never be duplicated in the studio.

Over the ensuing weeks recording Bahia, I learned that the most extraordinary auditory moments were often unanticipated, serendipitous, as if they had been waiting for me to record them. There's a brief interaction between a girl and a talking parrot on the album that could never have been staged or even predicted. It brings a smile every time I hear it.

Sound documentarians and ethnomusicologists search out places where the sounds and music will most likely be happening, while keeping their ears open for surprises. In the end, after weeding out technical errors, musical gaffes, and countless other unwanted sounds, what’s left is a collection of diamonds in the rough, gifts from the sound gods. And as with any gift, there comes a responsibility: editing and crafting a context that other sentient beings will understand. It's this basic urge to share what we believe is truly special that drives the craft of sound recording.

Most ethnomusicological recordings are carefully executed documents of a musical tradition. Impromptu or not, the recordings too have the power to exhilarate and inspire. In the UNESCO Collection of Traditional Music is a favorite LP of all time, Georgia I.8 The secular and sacred music on the album seems to invite a rarified kind of listening, as if to say, stop whatever you're doing; take a deep breath and let this in. At this moment, our spirits are refreshed, fed by something fine and indefinable. For me, this quality in the tenth-century liturgical selections is what lifts the music into the realm of the sacred. The most dynamic cuts on the album are the secular songs, which display dazzling forms of polyphony, overlapping choruses and soloists. “Hassan Begura,” a “historic chant,” is a striking example of this. The krimanchuli, a yodeling falsetto voice, interweaving solos with a bass and tenor, is joined with impassioned gusto by a three-voice chorus. It's a tour-de-force, and it still takes my breath away every time I hear it.

Ukraine: Traditional Music also offers striking harmonies which feature primarily female voices. Listen to “Today is the Festival of St. Peter,” “The reapers,” or “The mountain behind the mountain.”

Nowadays, it is not hard to come across successfully packaged, thematically and geographically oriented CDs of music recorded primarily in studios. I call it world music lite, or the world music equivalent of fast food. My search over the years, however, has favored a genuine, unmodified music, recorded in the field, which offers another level of sustenance.

We are, in a very real sense, what we listen to. The music in our heads impels, uplifts, and influences our lives from the inside out. It is reflected in what we notice and choose to gather and preserve from the world around us. With the advent of the smart phone, virtually every one of us is carrying in our pocket the means to become a sound documentarian. Who knows what unexpected delights are in store for our inner soundtracks in the future? Food for thought.

Jim Metzner is best known as the producer of the Pulse of the Planet radio series, broadcast for over twenty-five years on over 260 public and commercial radio stations worldwide and online at pulseplanet.com. See also jimmetznerproductions.com.

4 He published a CD and booklet set, Bayaka: The Extraordinary Music of the Babenzélé Pygmies and Sounds of Their Forest Home (Ellipsis Arts, 1995), and a memoir, Song from the Forest: My Life among the Ba-Benjellé Pygmies (New York: Houghton Mifflin, 1993).

6 One of Brazil's syncretic religions, blending elements of tribal worship and Catholicism.

7 Bahia: Traditional Music and Moments of Brazil (Pulse of the Planet Recordings, 2003) was originally released in 1976 as a boxed set, Sound Image, Vol. 3: A Portfolio of Photography and Sound, with recordings by Jim Metzner and photographs by Jay Maisel.

8 Georgia I: Songs of Oral Tradition from the Georgian Soviet Socialist Republic, recorded by the Tblisi Conservatoire and Y. Grimaud, annotated by Habib Touma, Bärenreiter-Musicaphon BM 30 L 2025, 1971, 33⅓ rpm. This recording was originally published as part of A Musical Anthology of the Orient in the UNESCO Collection of Traditional Music. 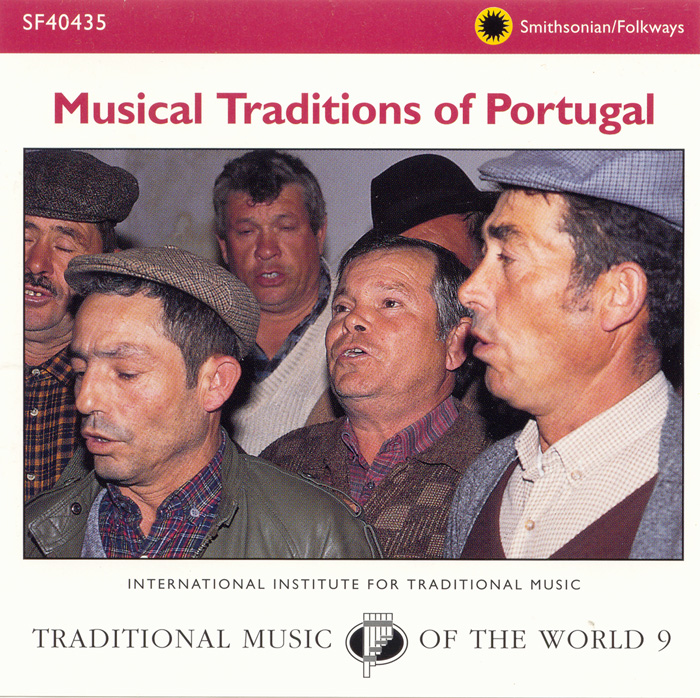 There is an exquisitely beautiful waltz played on two guitarradas, and a number of polyphonic cantes from Southern Portugal, where both sides of the Guadiana River each have their own distinctive style of singing. 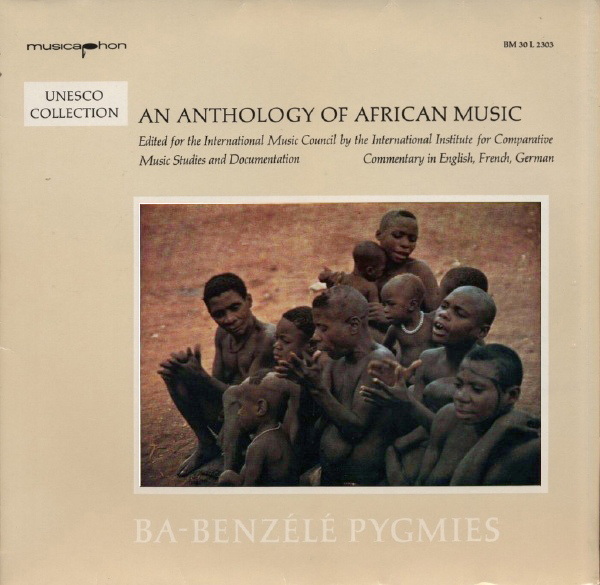 Ba-Benzélé Pygmies (Bärenreiter-Musicaphon, 1966) from An Anthology of African Music in the UNESCO collection.

Ba-Benzélé Pygmies (Bärenreiter-Musicaphon, 1966) from An Anthology of African Music in the UNESCO collection.